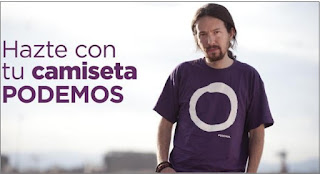 The Podemos leader, pony-tailed academic Pablo Iglesias (who sounds more like a Mexican or Colobian drug baron than a Spanish politician, which might be a good thing when it somes to facing down the smooth faced, back - stabbing EU bureaucrats, has already announced his movement will not accept Sanchez's demand. Podemos is now expected to vote against Sanchez if he seeks a parliamentary vote of confidence on his prime-ministerial bid.

The only party that could join the Socialist Party (PSOE) in backing a Sanchez cabinet is the small center-right group Ciudadanos. This leaves Sanchez with only 90 votes from PSOE plus 40 from Ciudadanos — a total of 130 whereas the majority in Spain's parliament is of 176 votes.

The impasse is opening a deep rift between the country's left-wing parties, which has only grown deeper after Podemos' scathing criticism of Sanchez during a high-octane parliamentary debate last Wednesday. Dialogue now seems a very remote possibility.
Sanchez will have to once again seek a majority vote on his bid to form a cabinet. He would only need a simple majority — that is: more people voting for him than against him — to clinch it. Still, even that prospective seems very unlikely.
Were Sanchez to fail, negotiations will resume for up to two months. After that, unless the parties reach a deal, new elections will be called.
Podemos's line is that the new government should result from an alliance among all the leftist forces in parliament. Iglesias has spoken of a "government of progress" that would gather under the same umbrella Podemos, the PSOE, United Left and Compromís. The anti-establishment party's main concern with Sanchez's current proposal is his deal with Ciudadanos.
Sanchez believes that a left-wing coalition would not be able to deliver a government really alternative to the current interim cabinet, led by conservative Mariano Rajoy of the Popular Party. Still, Sanchez' bid to cut deals beyond of the left's boundaries has not panned out so far.
Pedro Sanchez, the leader of the Socialists, which came second in the elections with 90 seats, previously said he wanted to form a leftwing government with Podemos on the condition that Podemos abandon its support for an independence referendum in Catalonia and its opposition to austerity measures imposed by Brussels and surrender of national sovereignty to EU bureaucrats.
Podemos wants Catalonia to remain a part of Spain but believes it should reject independence in a popular referendum, similar to the method Scotland used last year. "The only way to defend the unity of our country is through democratic processes," Iglesias said, as cited by The Guardian (article linked above).

Europeans want us British to lead them out of Europe. Don't be fooled by project fear, the European Union (aka the Euronazi Federal Superstate) is falling apart. There will not be chaos if we leave, there will be chaos if we stay.
Forced To Defend Her Insane Immigration Policy, Merkel Blames Anti Immigrant Party For Crisis
German Chancellor Angela Merkel has blamed opponents of her open doors immigration policy for the rise in crime, particularly rape and sex crimes committed by Muslim immigrants . Hausfrau - Volksfuhrer Merkel said in an interview on the immigration crisis that the anti-immigrant Alternative for Germany (AfD) party, stirs up prejudice and polarises society.