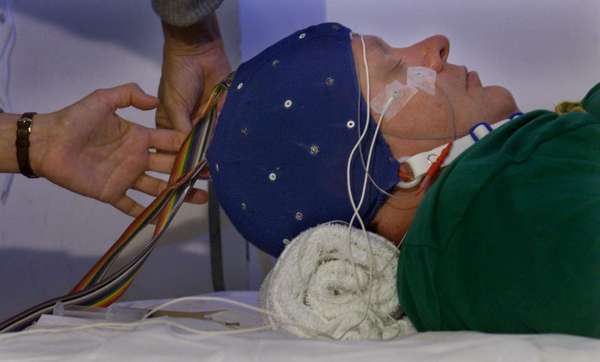 Elon Musk's latest business misadventure is a company that aims to merge the human brain with computer networks. At best it will be an ignominious failure, at worst it will create a species of humandroids (Image source)

There's no doubt about it, Silicon Valley billionaires are the sickest, most inhuman bunch of shits on the planet. There's Googles semi - autistic twins Page and Brin who are developing software to control our minds, Bill Gates who wants to reduce the human population by 15% (for starters)and forcibly sterilise people through vaccination (Gates is not clear how that will work) in order to 'save the planet'. Zuckerberg wants to rule the world through Facebook and those guys at Apple, having proved that using slave labour is good business are working to spread the idea.

The sickest, control freakiest and probably the most deluded however is Elon Musk. This weirdo (he even looks weird - hell he even looks weird by the standards of Silicon Valley nerds). With his failing car company Tesla eating cash faster than a Great White Shark eats seals, his whacko plan to provide standby power for houses from a small, unobtrusive battery pack proving capable for powering the average home for a hour, his plan to provide backup power for the entire Australian state of South Australia was laughed at when the costs were found to be many times that of conventional power.

Elon's first big fuck up came when he invested in Halcyon Molecular Inc. which was a DNA-sequencing startup founded in 2008. Their goal was to unlock the biggest secrets hidden in DNA. The company wanted to sequence 100% of the human genome in less than 10 minutes for less than $100. Due to the many competing companies with the fastest and cheapest DNA sequencing technologies, and the commecially exploitable information in DNA falling way short of expectations, the company shut its doors in 2012.

Musk, like one of those cartoon characters whose tragedy is a total lack of self awareness, will keep pursuing impossible goals obessesed with the belief that the impossible is possible if you just throw enough science at it. His SpaceX vacations in space project using vehicles that, in common with SkyLab and the Space Shuttles will not actually be in space but in the thermosphere, the fourth layer of the atmosphere. Outside that is the exosphere, which must be negotiated before a space ship can honestly claim to be in space looks like being another expensive failure as Musk and his British rival to be the first space tourism billionaire discover there are problems related to putting humans in the outer layers of the atmosphere that NASA and the Russian Space Agency do not talk about.

Musk's craziest and sickest project to date however is his launch of a business that plans to develop devices that can be implanted in the human brain. After venturing into space exploration, electric cars and solar roofing, wannabe business magnate and visionary Musk (he is in fact an investor who made one very good investment and several which stink) wants to create gadgets that can link the human brain to computers so that AI and the brain can work hand in hand. The new company Neuralink Corp, launched this week is, according to the pitch for investment, the first step to realizing Musk’s desire to merge the human brain and computers.

According to The Wall Street Journal, the SpaceX and Tesla CEO’s new venture aims to produce devices that can be implanted to the human brain in order for artificial intelligence software to enhance brain activity, improving memory and allowing for a more direct interaction between the brain and electronic devices.

It has been reported thatMusk is assuming an “active role” in backing the neuroscience startup. Neuralink is registered as a medical research company in California with several high profile academics in the neuroscience field as members of its team.

Musk’s venture may not come as a surprise to people who follow the South African-born engineer as he progresses up the creepiness index to a position from which he can challenge Google's Dr. Evil wannabes. He has hinted several times that he plans to create a technology that could build a connection between the human brain and computers, as The Verge reports.

“Over time I think we will probably see a closer merger of biological intelligence and digital intelligence,” Musk recently said while speaking to a crowd in Dubai. “It’s mostly about the bandwidth, the speed of the connection between your brain and the digital version of yourself, particularly output.” It's worth remembering that a recent experiment concluded a computer would need several hours to process one minute of brain activity. And then there is the small problem that we have absolutely no idea how to convert computer data into the electrical pulses the brain fires along neurons in a way that would be meaningful to the brain. And until we have cracked that we are stuck with language, numbers and Boolean logic. So Musk's latest scheme is just another whacko non starter.

Last year, Musk also presented the idea of a neural lace, a device that would be surgically implanted to a human brain to allow connection between the nervous organ with computers. He has since been updating his followers on Twitter about the progress he’s been making with this project. In late January, when someone asked Musk if he is already set to announce neural lace to the public, he briefly responded, “Maybe next month.” But it appears Musk wasn’t ready to deliver the news to the world in February and with only hours remaining in March at the time of writing we have again heard nothing. One could be forgiven for thinking the idea is going the way of Google Glass. Now that the California startup is official, however, Musk will be able to share more information on the lack of development on his project to turn people into humandroids.


Time is NOT real: Physicists show EVERYTHING happens at the same time


The concept of time is simply an illusion made up of human memories, everything that has ever been and ever will be is happening RIGHT NOW. That is the theory according to a group of esteemed physicists who aim to solve one of the universe’s mysteries.
Most people do not even consider the concept of time but there is nothing in the laws of physics to state that it should move in the forward direction that we know. The laws of physics are symmetric ultimately meaning that time could have easily moved in a backward direction as it does forward. Indeed some adherents to the ‘big crunch’ theory say time WILL run backwards when the universe stops expanding and starts contracting back in on itself.

The German Interior Ministry has revealed a new “Bundestrojaner” or government trojan horse software that will enable security agencies to track the smartphone activities of anyone who downloads it. We understand Chancellor Merkel's government has also adopted an “off the shelf” tool from a company which is said to help authoritarian regimes track their citizens ...

Canadian school boards and school medical health officers have been notified by their government's Education Department that insurers Lloyd’s of London has excluded from school insurance cover any liability for injuries, "directly or indirectly arising out of, resulting from or contributed to by electromagnetic fields, electromagnetic radiation, electromagnetism, radio waves or noise." ...

In a recent interview with the German magazine “Süddeutsche Zeitung“, Bill Gates, son of a CIA director and the New World Order's 'made man' uttered some highly sinister comments in support of abolishing democracy and nationhood in favour of world government.

Google attempts to become the Internet's Ministry of Truth

Readers of The Daily Stirrer will know we have always said the full version of Google's corporate motto Don't Be Evil, is Don't Be Evil, That's Our Job. Here's the latest example of Google being evil, their plan to censor the internet and ensure that controversial or dissenting views from those approved by the government / corporate complex never show up in listings. Read to end to learn how to beat the evil empire.
Robot revolution improves efficiency – but there's a price for human society

GM babies? How About The Frankenstein Lobby Try A Bit Of Honesty And Call It Eugenics

As the British Parliament debated legalising the use of techniques to create three parent babies and the dishonest champions of scientific fascism claim is is a perfectly safe development to remove faulty genes from humanity and in no way similar to programs with the same aim carried out in Nazi Germany, we challenge them to be honest and admit what they propose is Eugenics, a morally repugnant quest to create a master race. And all three main political parties support it.


PayPal Asserts Copyright Ownership Over All Intellectual Property of its Users

The update comes in the aftermath of the announcement that eBay and PayPalwill split apart into two separate companies. Under the heading “Intellectual Property,” PayPal announcesthat it is introducing a new paragraph to its agreement, effective July 1, 2015, that will allow the company to “use content that you post for publication using the Services”.

Almost every day we hear scientists burbling about artificial intelligence and how very soon machines will be smarter than humans. As scientists are nowhere near as smart as humans its hard to see how science can build something smarter. The problem is of course we don't understand what contsitutes intelligence - those who think academic qualifications are the only indicator are retards. So where will this madness to replace us with machines end?
Will Humans Become Redundant In Your Lifetime?
by Ian R Thorpe.As unemployment continues to rise a few people in all walks of life are starting to recognise that contrary to what we are constantly being told, the internet and technology in general is not a job creator but a job killer. And yet our politicians continue to export low skill jobs to low wahe economies and automate the work requiring higher skill levels.

Human rights for robots? That's the craziest thing I ever heard, you might well be saying. but those unfailingly loony and dysfunctional fuckwits in the science academe are so convinced they can build machines (robots) with human attibutes they are demanding equal rights for animated tin cans. This over - the - top rant pusts a few things in perspective.