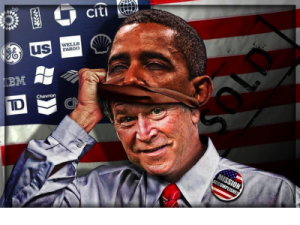 Obama bush political twins (image source: The Daily Sheeple
America's neoconservatives are nothing if not persistent. With the American dream turned into a dystopian nightmare and a foreign policy gear to making the USA the dominant global superpower in sheds after misadventures in Afghanistan, Iraq, Libya and Syria, a gang of national-security analysts have published an outline of what they think a Republican administration's foreign policy should the GOP candidate take office on Inauguration Day 2017. Titled “Choosing to Lead: American Foreign Policy for a Disordered World,” it concedes that “there are limitations on American power,” that were simply beyond the comprehension of the previous neo-con governments of Clinton, Bush 2 and Obama.

Clinton and Obama neo - con you might well ask. Yes, make no mistake, no matter who wins the election the faceless people who never subject themselves to the ordeal of a popular vote and thus cannot be thrown out of office are the ones who truly govern.

…understand, too, that with the right leadership and policies in place, the United States can once again be a guarantor of global order and peace, a champion of human rights, and a beacon of economic growth and human flourishing. There is no reason the 21st century cannot be the next American Century. …Choosing to Lead offers perspectives and recommendations on how to make the next American Century happen. In doing so, we believe it will serve the world as well as the United States of America.

It all sounds like a rebirth of the "Project for the New American Century (PNAC)", published in two volumes, Present Dangers and Rebuilding American Defenses, that together formed a neocon manifesto for the Republican presidential candidate in the 2000 election. While Obama's neo - revivalist campaign which presented the candidate as a messianic figure who would walk on water and raise dead voters so that he might lead the sick, feed the blind and maketh the poor to see, was not as overtly neo conservative and belligerent his administration, taking American exceptionalism as its theme, behaved as if international law applied to every nation except America and violated treaties, the UN charter and the unwritten laws of basic decency without compunction in its eforts to impose the Obama doctrine on nations that asserted their sovereignty. If you are wondering, the Obama doctrine can be summed up as, "I'se been 'lected, dem whitey all goan do what I sez."

Needless to say it did not play well in Russia or China.

"U.S. foreign policy today is failing every test that a great power’s foreign policy can fail. Today, America’s enemies do not fear the United States and America’s friends doubt that they can trust it. Neither the American people nor the world-at-large understands anymore either the purposes of American power or even, in some respects, the principles that shape them. Indeed, after a decade and a half of conflict in the Middle East and South Asia, some Americans have concluded that the best thing to do is to pull back from the world and its troubles. Some argue that America’s role as guarantor of global order is no longer necessary, history having ended with the Cold War; there are also those who think the United States is too clumsy and incompetent to do much of anything right; and there are, finally, those who think that “nation-building at home” is some kind of alternative to engagement abroad."

We disagree. We believe that a strong United States is essential to the maintenance of the open global order under which this country and the rest of the world have prospered since 1945; that the alternative is not a self-regulating machine of balancing states but a landscape marked by eruptions of chaos and destruction. We recognize the failures as well as the successes of past policies, because to govern is to choose, and to choose in the world as it is, is necessarily to err. But while we believe that we must understand those failures and learn from them, we also believe that American power and influence has, on the whole, served our country and the world far better than American weakness and introversion.

To give them their due, the authors recognise that, among other things, the U.S. economy is not nearly as dominant in relative terms as it was after World War II, a fact that seems to have escaped Obama and his cabinet of cronies throughout his presidency. Obviously the Republicans, more business oriented than academic, are aware of moves led by China and Russia to replace the US dollar as reserve currency.

“Our resources will be finite, and so will be the ability of our leaders to focus on more than a few problems at a time,” the text warns. It is refreshing that there’s no more talk here about the US Global Empire being mightier than the Roman or British Empires. But they still believe that the U.S. should be the “guarantor of global order.” We wonder what Presidents Putin and Xi make of that.

The neo - cons deem Beijing’s aspirations unacceptable and decry the ambition to “replace the American-shaped order that enabled China’s ‘peaceful rise’ with a system in which we are only one of multiple, equal participants.” Russia, Iran, North Korea and “non-state actors—most notably, jihadi movements of several stripes”—also qualify as key threats.

All in all, the document will not do much to restore confidence in the USA should the Republicans manage to defeat Granny Clinton or whoever the Democratic party put up in the election.

while I have been amused by the antics of the Republicans as they search for a way to stop Donal Trump, on the other side of the coin I have learned there is not alot about the Democratic Party that is actually democratic.
American dollar dumped
Failure of American leadership
The fall of the American Empire
American parnoia drives foreign policy
Collapse of America's world leadership under Obama
America's foreign policy based on warmongering
Implosion of the Obama myth
Obama and Putin play balls out politics
Latest Posts