While mainstream media were dutifully broadcasting and printing versions of the official narrative throughout last week as they have since Russia invaded Ukraine, that the forces of little Ukraine were bravely resisting the onslaught of big bad Russia and actually pushing the invaders back to their own territory, this blog has been focused throughout the crisis on the economic consequences for the west, and the far bigger issue of what will happen in the developed nations once economic sanctions cut off supplies of essential raw materials American, Europe and the rest of the G19 group are dependent on Russia for.

It has not taken long for us to be proved right (as usual). Our argument that Ukraine was just a sideshow to the real war which is being fought in the stock and currency exchanges and commodity markets of the world's financial centres is already visibly right as pictures of empty supermarket shelves are being published by news media and posted by contributors to social media. 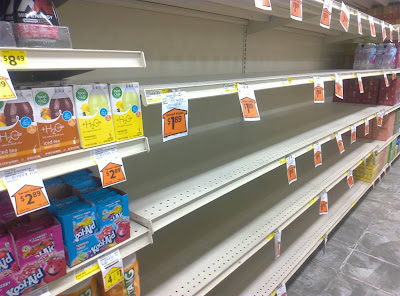 Countries around the world, especially in Europe where Germany and Austria are leading the way, have started rationing food and fuel.

Europe’s food and fuel crisis was already in progress before EU member states imposed economic sanctions on Russia in compliance with the diktat of America's Biden administration. This threatened the flow of already-critical commodities in Europe and threatened to collapse global supply chains still suffering disruption due to the chaotic and ineffective measures imposed in response to the hoax pandemic.

As a result of these acts of gross incompetence the prices of everything from oil to wheat began to climb in the second half of 2021, soaring to unimaginable levels since the Ukraine situation blew up, leading to the highest inflation rates for decades. Supplies of essential products such as oil, natural  gas, wheat, edible oils and fertiliser have also dwindled after exports from Russia were completely strangled. And while the west suffers from its own sanctions, Russia has found a very simple workaround and is still selling its products to nations that account for two thirds of the world's population.

Sunflower oil, wheat, dairy products and gas for power generation and fuel for business and domestic needs are being rationed

Spain appears to have been the first country to experience serious shortages of different products like eggs, milk and other dairy products almost immediately following the outbreak of the war in Ukraine. In early March, major supermarkets like Mercadona and Makro began rationing sunflower oil.

Spain’s government, a shaky coalition of centre left, centre right and far left parties cobbled together by Brussels to keep anti - EU parties such as Poemos away from government, gave stores the option to temporarily impose limits on the number of certain products customers purchase.

In Greece, at least four national supermarket chains have started rationing food products like flour and sunflower oil due to critically low supplies caused by the crippled supply chains coming out of Russia and Ukraine.

The supermarkets claim the current rationing is only a preventive measure that will be rolled back once Greece’s supplies of flour and sunflower oil stabilize the government states. Around 30 percent of Greece’s wheat imports come from Russia and Ukraine so it seems supplies are not likely to stabilise any time soon.

The German government triggered the first part of a three-stage emergency plan to conserve the country’s natural gas supply last week. This move came after Russian President Vladimir Putin demanded that Germany pay for Russian gas in roubles thus turning Western sanctions against the nations that imposed them.

German Vice-Chancellor and Minister for Economic Affairs Robert Habeck explained that the current rationing plan is a preventive measure implemented to make sure the country doesn’t experience a critical shortage. Habeck is talking bollocks, if Russia decides to shut down the pipeline Germany, thanks to Green idiocy and loonytoons 'net zero' energy policies, will be plunged into chaos.

Britain and the USA, having their own energy resources now that sky high costs of the resources that are available to import make it economically viable to start up parts of the North Sea and Texas oil and gas fields that had been mothballed because cheap imports made them uneconomic, are so far less hard hit. But supply problems have only just begun, Russia supplies two thirds of the world's Ammonium Nitrate, the active ingredient in commercial fertiliser, so when crop yields fall in those nations that can still supply us, food shortages must follow.

Whatever is happening on the ground in Ukraine, and it is wise to be profoundly skeptical of the propaganda from both sides, those of us with access to the news feeds the markets get information from know the only certainty is that while stupid, arrogant western leaders have been obsessed with presentation, Russia has out - manouvred them economically to such an extent that the war could well bring about the collapse of the US dollar and with it the global financial network.

Britain can’t cut off domestic gas without other reliable energy sources
An interesting selection of letters to the editor in the Daily Telegraph on an idiotic policy just adopted by parliament's climate change committee, who are more interested in sucking up to The Islington Screechers and competing with the idiot Macron on France, and the Soros lackey Merkel in Germany to go down in history as the leader who most effectively destroyed the country they led.