If Trump Were Sexually Interested In Men, It Would Be Politically Incorrect To Say Anything Negative About It 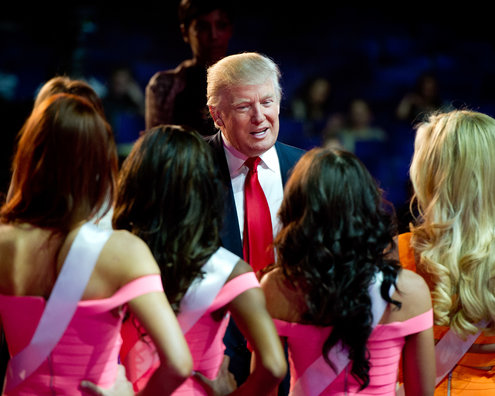 
Donald Trump with beauty pageant participants (image source: NYT)
Eye Catching (and accurate) Headline For And Article That Is Well Worth Reading (and should be manadatory reading for the war - loving, hypocritical 'liberal' bigots who want to put in The White House candidate who has promised war (and that would be nuclear war) with Russia and by association China.

I know Donald Trump is an unattractive candidate but read the article and if you are thinking of voting for Hillary Clinton take on board the thought that by voting for Clinton you are voting for a war nobody can win .

So don't let eyewash distract you from the real issue here. The thought of President Trump might horrify you, but victory for him would at least offer a break from the political dupoly that controls Washington and the influence of neocon hawks and the military / industrial complex, and a chance to rebuild a true constitutional republic based on REPRESENTATIVE democracy.

A Clinton victory would mean more war, destruction, death; but this time round it will not be confined to Syria, Iraq, Yemen, Libya, Afghanistan and Ukraine. It would be coming to east and west coast USA and gradually creeping further inland.

"The presstitute media are doing everything that propagandists can do to anoint Hillary to the Oval Office.

The main issue facing the electorate is whether the next administration will lead us into military conflict with Russia and by implication with China, not Trump’s sexual interest in women. The conflict would be thermo-nuclear. Trump is in the oligarchs’ crosshairs, because Trump disavows conflict with Russia.

A subsidiary issue is that Trump, unlike Hillary, is not owned by the oligarchs. If Trump were able to form a government that reflects this difference, there would be hope for peace and for Washington to turn its attention from service to the One Percent to service to the 99 Percent."

AS PROMISED, WIKILEAKS JUST DROPPED THE BIG BOMB ON HILLARY â€“ The SMOKING GUN IS OUT!

Hacker Dumps Thousands Of Emails From Close Clinton Insider, Reveals Hillary's New Email Address
They, Your Husband's Victims That Is, Have Names, Hillary

How Much Does It Cost To Buy A US Ambassadorship

Julian Assange Confirms Sanders Was Threatened By Clinton Campaign Thugs
"Clinton Foundation Is Charity Fraud Of Epic Proportions", Analyst Charges In Stunning Takedown
Are Sites That Criticise Hillbillary Clinton Are Being blocked By Google?
If This Does Not Disqualify Hillary For The Presidency, It's Hard To Know What Will
Hillary and the Clinton Foundation: Exemplars of Americaâ€™s Political Rot
The Difference In Voting For Hillbillary or Trump Is One Promises War With Russia, (the other is named Donald)
Wiki Leak Found Email Linking Obama, Clinton To ISIS