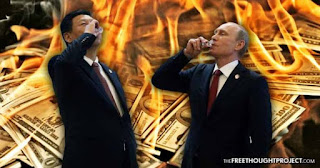 Russia and China declare all out war on the Petrodolar

"WTF has China's new oil futures market to do with us Minds punters?" you might well ask.
It is in fact going to affect us all not just commodities traders, oil speculators and hedge fund managers. The thing is the Chinese (and their BFFs The Russians and Iranians did not just set up this venture because they fancied dabbling in the oil trade.

The launch of the gold backed Petroyouan on the Shanghai financial markets is the culmination of several years manoeuvreing by China and its allies to create a rival trading system to the Petrodollar which has dominated international trade for over forty years. I reported on the news HERE and in several other posts.

Few people are aware of how reliant the US economy has become on the position of the US$ as the global reserve currency. This is because mainstream media never reports on it and TV pundits dare not mention it for fear of losing their lucrative gigs as talking heads on TV. I have talked about it since the very beginning, when Saddam Hussein decided he didn't need the Petrodollar, modern technology could trade his oil for any currency he fancied. And we all know what happened to him.
Nothing will change overnight, or next month or for several months, but gradually we will see a further shift of economic power from west to east. And that will affect prices, jobs, our standards of living and much more

EU To Reduce Dependence On US Dollar As Sanctions Hit Trade With Iran
Plans to reduce European Union dependence on the US dollar have been rumoured for a while now, as China’s alternative to the Petrodollar continues to gain strength. The EU is not signing up to the move by Russia, China and the other BRICS bloc nations to replace the dollar but are thinking involvement will improve the 27 member Union’s ability to run an independent foreign policy ...