by Moon of Alabama
The U.S. occupation force and its Kurdish proxy SDF in northeastern Syria are supposed to fight the Islamic State in its last hold out northeast of Euphrates. But the operations against the handful of towns ISIS (grey) still holds - launched only after long and unexplained delays - shows little progress. Last week it received a serious setback.
Red = Syrian Arab Army; Yellow = U.S./SDF; Grey = ISIS 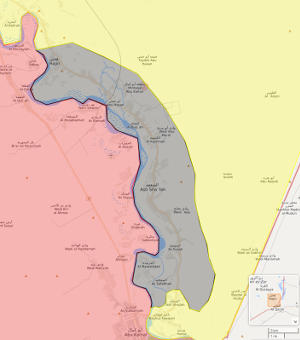 biggerAfter several days of sandstorms (vid) hindered U.S. air support, ISIS counterattacked on October 11 against the U.S. led SDF. Suicide bombers blew up SDF checkpoints as ISIS broke through the lines. It retook several villages and on October 12 raided a refugee camp for local civilians that the U.S. coalition had set up near Al Bahrah (on the upper left of the map). Some 130 refugee families with about 700 persons were taken prisoners and brought to Hajin, a small city at the northern end of the ISIS held area.
Through local tribal elders ISIS requested to negotiate with the U.S. coalition about an exchange of prisoners. It also demanded medical and food supplies in exchange for 90 captured women it had isolated from their families. The request was rejected. ISIS now threatens to kill ten of the abductees per day unless its demands are fulfilled.
Read all - Moon of Alabama >>>