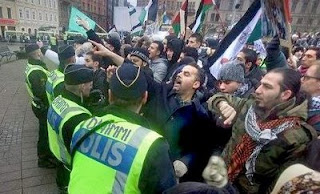 Immigrant gang members confront police in Sweden
We are learning from Scandinavian news media that Police in the Swedish city of Gothenburg are seeking the killer or killers of a man shot dead in a carpark at Angered, about 13 kilometres north of the city centre.

The victim, "aged around 30" according to reports, was taken to hospital but was dead on arrival. Regional newspaper GP suggests the shooting was gang related, but police have not yet commented on likely suspects.

If the reports from GP are true it will be the second gang related shooting in a week and comes only a short time after another major shooting incident in the city, which involved gangs from immigrant communities who are engaged in a street war for control of the city's drugs and sex trade.

The second shooting incident of the week followed another deadly attack on Wednesday night.

Police were called to an apartment block in Brämaregården in Hisingen when a man in his fifties was shotm dying later from his injuries. Four men in their 20s have been arrested in connection with that incident and are being held by on suspicion of murder.

Although there have been numerous Gothenburg, Stockholm and other Swedish towns and cities, most of which have been linked to immigrant crime gangs, until recently fatalities are relatively rare.

“The gang environment is… I don't want to exactly call it the Wild West, but something in that direction,” Amir Rostami, a leading authority on Sweden's organized crime groups said last month.

Disillusionment With EU Grows as Swedish Support Slumps By 30%

A new opinion poll carried out on support for the European Union in Sweden has produced some shock findings as a massive turnround among Swedish voters probably due to mass immigration and migrant related crime waves in cities. From being one of the most solidly pro-EU member states, Sweden now has a substantial majority against membership of the EU.

Worlds Biggest Luxury Liner To Be An Immigtant Hostel?

Watch two Finnish shopgirls out a couple of male Muslim shoplifters.
Arthur's introduction (in his usual inimitable style) to this video from Finland might offend some people, but the attitude of Muslim immigrants that they can just walk into shops and take what they want, force themselves on women whenever they please, molest young children and tel us how to run our countries in Europe needs to be challenged.

When Donald Trump, currently frontrunner in the contest to be Republican Party candidate in the USA's 2016 Presidential Election, in a campaign broadcast commented that Islamisation of the west has gone so far parts of London are so heavily populated with Muslim extremists there are now no go zones for police and emergency services, he was attacked by politicians and the mainstream media.

The BBC, Britain's publicly funded broadcaster is bound by a charter which commits it to be balanced and non partisan in its news reporting. Repeatedly however, the BBC, its management now doniated by left wing luvvies is becoming more and more blatantly left wing in its unbiased reporting

Autumn Gets More Interesting As Merkel Admists She May Have Caused balkans War.

Violence between migrant gangs of different ethnicities vying for territorial rights to run organised crime has become the norm in Malmo, southern Sweden. Now it appears that as a consequence of the Swedish loony left government’s insane policy of flooding the country with third world migrants without