Democrats Have Only Themselves To Blame For Trump

By David Harsanyi, The Federalist

While in many ways the 2016 presidential contest was an uprising against the establishment, let’s face it, Republicans weren’t punished last night. And that’s not a new development. This will be the fourth consecutive election in which the GOP has won the Senate and House. Nearly every conventional conservative Senate candidate — the ones Donald Trump’s fans supposedly hate — all ran ahead of the GOP nominee. In Arizona, Florida, Wisconsin — nearly everywhere. This includes Republicans who were reticent supporters or outright critics of Trump.

A melodramatic Van Jones is free to claim that Trump’s victory is a “white-lash.” But ever since Barack Obama’s unprecedented passage of Obamacare, his party has lost more than a thousand seats nationally in three wave elections. From 2010, the electorate demanded Washington share power, but the president didn’t listen, relying on executive power, the bureaucracy, and judiciary to pass agenda items without consensus or compromise.


How Obama Inadvertently Set the Stage for Trump’s Presidency

In­stead of of­fer­ing voters a de­tailed policy agenda, Obama won the pres­id­ency in part thanks to his iden­tity, an iden­tity that power­fully ad­dressed a his­tor­ic­al wrong. In the pro­cess, he made it pos­sible for Trump to ad­vance to the pres­id­ency on the strength of an en­tirely dif­fer­ent sort of iden­tity, one that ap­pealed to an in­tensely loy­al base of white, work­ing-class voters.

Donald Trump’s campaign manager, speaking on MSNBC, said appointing a special prosecutor for Hillary Clinton can’t be ruled out, adding that discussion regarding the issue will happen “in due time.”

Trump and Vice President-elect Mike Pence are “looking to unify the country, but we haven’t discussed that in recent days, and I think that it’s all in due time,” campaign manager Kellyanne Conway told MSNBC in an interview, as quoted by Reuters.

Trump did not bring up the issue when speaking on the phone with Clinton overnight, the campaign manager added in a separate interview for ABC.

Gender ideology has spread so far and wide that the Pope may need to issue a high-level document to correct its We the People are TAKING AMERICA BACK from the lawless, corrupt, incompetent criminals running Washington and the media
Wed 8:20 am UTC, 9 Nov 2016 errors, a Dutch cardinal has said.

Cardinal Willem Eijk, Archbishop of Utrecht, said many Catholics were being “misled” by gender theory to the point where they believed their children can choose their own genders, partly because “they don’t hear anything else”.

He said a papal encyclical or other similar document “might appear to be necessary” to spell out church teaching on the issue, adding that it urgently needed to communicate the truth of its teaching on the human body.

“Perhaps a document only on this problem might be an urgent question,” he told Catholic News Service, adding: “[Gender theory] is spreading and spreading everywhere in the Western world, and we have to warn people.”

“From the point of moral theology, it’s clear — you are not allowed to change your sex in this way,” he asserted.

The cardinal added that many Catholics are now beginning to accept gender ideology “in a very easy way, even parents, because they don’t hear anything else.”

We the People are TAKING AMERICA BACK from the lawless, corrupt, incompetent criminals running Washington and the media

We’re going to start by rejecting Hillary Clinton and the entire corrupt political class, most of whom belong in prison, not in high office.

Next, we’re going to reverse the completely idiotic policies, executive orders and regulations of the lunatic leftists who have been running American into the ground for the last eight years. This effort is going to begin by completely repealing the disastrous, unconstitutional, ill-conceived health care fiasco known as “Obamacare.”
Crush the lying media

Even while that’s happening, we’re going to turn off the lying leftist media and stop watching their state-run propaganda parading around as news. All the “fake news” organizations — Associated Presstitutes, Reuters, CNN, MSNBC and the Huffington Post — are going to find themselves plummeting in audience size as informed people reject the deep media corruption that has been on raw display during the 2016 election.

But all that is just the start of what We the People have in store for the corrupt political establishment.


The Fight Isn’t Against ISIS, It’s Against Assad

“I don’t believe anyone will consciously launch World War III. The situation now is more like the eve of World War I, when great powers were armed and ready to go when an incident set things off. Ever since Gorbachev naively ended the Cold War, the hugely over-armed United States has been actively surrounding Russia with weapons systems, aggressive military exercises, NATO expansion. At the same time, in recent years the demonization of Vladimir Putin has reached war propaganda levels. Russians have every reason to believe that the United States is preparing for war against them, and are certain to take defensive measures. This mixture of excessive military preparations and propaganda against an “evil enemy” make it very easy for some trivial incident to blow it all up.” – Diana Johnstone, author of “Queen of Chaos: The Misadventures of Hillary Clinton”

In September 2013 President Obama stood before the United Nations General Assembly and declared, “I believe America is exceptional.” The following year at the UN, the president classified Russia as one of the three threats to the world along with the Islamic State and the ebola virus. On March 9, 2015 President Barack Obama declared Venezuela “an unusual and extraordinary threat to the national security and foreign policy of the United States”.

Vladimir Putin, speaking at the UN in 2015, addressing the United States re its foreign policy: “Do you realize what you have done?”

A Special, Brand Boosting Song For The New President.

Though I am a very sound sleeper, this morning I was rudely awakened at some obscene hour (well OK, it was around 6:30 am but I'm not a morning person) by Mrs T. a fully paid up, card carrying insomniac, sitting up in bed next to me, singing a daft song familiar from our childhood back in the 1950s. "WTF", I asked (well it probably sounded more like Wurr durr furr).

"I'm singing Nellie The Elephant for America's new president, she replied brightly. Slowly becoming aware I registered that the talking heads on 24 hour news were not talking about the usual things but were getting quite animated about President Trump.

"To Bombay, a travelling circus came,
they had an intelligent elephant
and Nellie was her name ..." Teri trilled happily

"Nellie The Elephant, wurr durr furr," you might well ask. But given the new president's name and the image used for his party logo, it's highly appropriate, scroll past the image of American politics' bad hair day to see a snip of the lyric. Links to full lyric and video further down. 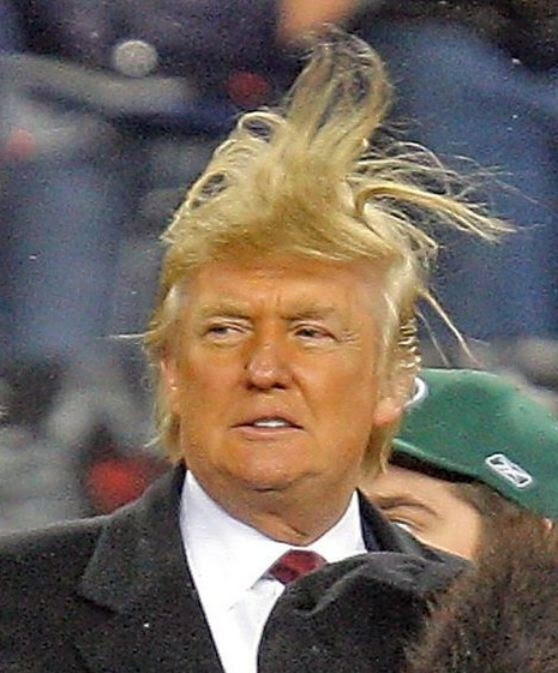 One dark night
She slipt her iron chain, and off she ran
To Hindustan and was never seen again