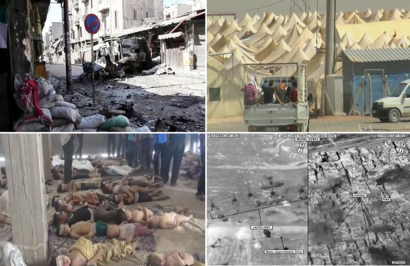 Scenes from the civil war in Syria (image source)

But that was is still going on.

It has been reported by The Hindu and Times Of India that more than forty people were killed in the past 24 hours in an attack carried out by the Islamic State affiliated Al Nusra rebels at a military airport in the Syrian province of Aleppo, a monitoring organisation said on Monday.

The London-based NGO, Syrian Observatory of the Human Rights, said that among the dead were 15 government troops and this included 12 police officers, while 26 IS jihadists were also killed in the offensive launched on Sunday by the IS to gain control of the airport.

The monitoring group said that the clashes were going on in the area. The IS proclaimed a caliphate in territories under its control in Syria and Iraq in June 2014.

Syria: It's where rmageddon is scheduled to take place

Have US backed rebels used nuclear weapons against Assad

The Barbarity of Syrian rebels made the Assad haters STF up

ISIS are a creation of the USA military / industrial complex