In The Words Of The Prophet Kurt Corbain

I was never a fan or Nirvana or Kurt Corbain (though he was a dickhead, and his lyrics were just garbled collections of comic book images) and I don't believe in prophecy, which is not to say that I don't accept people can at times experience prescience, but when I saw this online I was gobsmacked. 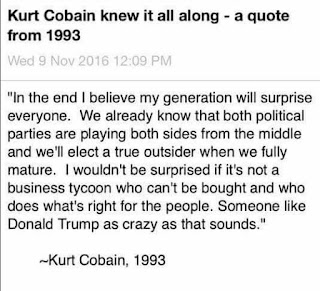 Having checked to conform as far as possible that it is authentic (i.e. left wing propaganda site Snopes says its a hoax, so on balance it is probably true),and found that it seems to be, it must provide food for thought. A rock star who, a year before his death in 1994, not only spoke the truth about the corruption of American politics (and let's not pretend Europe was any different) and the eventual people's pushback that would topple the self serving elites from their ivory towers, he also named the political outsider who would figure in the rebellion, businessman and property developer Donald Trump. What did Kurt Corbain, who spent most of his life shit faced on cocktails of various drugs (mostly heroin) know that the rest of us either didn't or were ignoring.

Perhaps we should all get shit faced and get in touch with the deeper levels of our psyche.