Another of those news stories which gives us chance to say "We told you so."

Leaders of the FUKUS axis (France, UK, USA) which launched an allegedly humanitarian bombing campaign on the regime of Libyan dictator Col. Muammar (Mad Dog) Gadaffi which removed the secular regime from office and the crazy dictator from the human race, but also succeeded in turning Libya from the most prosperous and most civilized nation in Africa into a failed state with three warring factions claiming to be the legitimate government, were ill advised by 'experts' as stupid and ignorant as themselves.
What makes western leaders and their armies of
special asdvisers even worse than stupid is they do not learn from mistakes, they repeated the Libya regime change cock up in Syria and Ukraine but failed to pull off the same trick in Egypt, when after President Mubarak has been deposed by Islamic extremists, the military reasserted themselves, disposed of the Muslim Brotherhood regime and returned to business as usual.
And now we learn things are back to square one in Libya.
One thousand troops from British Special Forces regiments have been deployed in Libya to wrest back control of more than a dozen oil fields overrun by Islamic State guerillas according to news agency reports.
In a ground operation that should have accompanied the bombing campaign of four years ago, approximately 6,000 European and US soldiers, including the British contingent  will be involved in a number of operations aimed at repelling  the advance of jihadist terrorists.

The operation will be led by Italian forces and supported mainly by Britain and France. Italy is the former colonial power in the north African state. UK Special Forces, including military close observation experts from the Special Reconnaissance Regiment, are spearheading a major coalition offensive against the jihadist group, according to Ministry of Defence press releases.

IS  now controls several oil fields in Libya and will be hoping to use the stolen oil laundering system established with the family of Turkish president Erdogan to raise funds from illegal oil trades. The Islamist group is also eager to win more control over the country, as the land could provide them with millions of dollars to fund terror attacks.

The terrorist network is now targeting the Marsa al Brega oil refinery, the biggest in North Africa.
If jihadists successfully capture the oil refinery, located between Sirte and Benghazi tn the east of the heavily populated coastal strip, they would gain full control of the country’s oil.

FUKUS axis troops (France, UK, USA) Unable To Halt ISIS March Towards Libyan Oil
The lastest news coming out of Tripoli is that The Islamic State (ISIS) force in Libya is taking on extra personnel faster than anyone can keep up with, some of these are raw recruits from north and sub Saharan Africa but many are experienced fighters (i.e, they know which end of a gun is dangerous) and is advancing towards Libya’s oil crescent, eyeing billions of barrels ...

Almost five years after the United States and its NATO allies launched a campaign in Libya to overthrow Col. Muammar el-Qaddafi, the United States is on the verge of massively escalating its military operations in the war-torn country.

While Donald Trump continues to increase his dominance in opinion polls on voting intentions in the US Reublican party's contest to be nominated official candidate for the Presidential election in November 2016, over in the democrat camp, while Hillary Clinton inexplicably still leads the field (apart from being married to a former president Mrs. Clinton's only qualification to lead the country is a disastrous term as Secretary of State for foreign policy,) another political maverick though not quite as much an outsider as Trump, is polling consistently well.

Indications are that when campaigning gets serious sometime very soon as the first primaries are only weeks away) we could see Sanders closing the gap as Hillary's enemies (of which there are many) start to undermine her very dubious reputation.

Bernie Sanders may not be topping polls yet but has broken Barack Obama’s fundraising record from individual donors with more than $33 million in the last three months of 2015. And we must remember that Sidi Obama was not leading the race at this stage in 2008.

The Sanders campaign released the news of his financial success this weekend. It increases the campaign's year-end total donations to more than $73 million from over 1 million people. The boost could not have been better timed for Sanders with the critical Iowa caucus just a month away.

The significance of the record cannot be overstated as Sanders, initially considered a dark-horse candidate because he chose to run without the super PACs used by all of his main rivals is a socialist and represents a rejection by registered democrat voters of Washington machine politics. In the same way Donald trump represents a rejection by Republicans of the status quo. It is very unlikely that the party machines will allow either Sanders or Trump to win their party's nomination, but that is likely to lead to the election by political fiat of a candidate with even less credibility than the man with no past, Barack Hussein Obama.

After a controversial Supreme Court ruling on a legal challenge brought by big business lobby Citizens United, political action committees (PACs) can help candidates collect unlimited, anonymous donations independently. That gives cover to a small group of wealthy contributors who support other Democrats like Hillary Clinton and Republican candidates. It is well known however that Hillary Clinton is the candidate preferred by corporate power brokers

Sanders has responded by calling for the repeal of the Citizens United ruling a central part of his policy platform, calling election finance "corrupt". Hillary Clinton has not commented but for either her or her husband to condemn corruption would attract accusations of hypocrisy.

A new opinion poll from Quinnnipac University shows Hillary Clinton's lead in the contest to become the Democratic Party Presidential nomineee has almost completely evaporated. From a lead of around thirty points in early December, the numbers are now 44% Clinton, 42% Sanders, which is such a narrow gap the only two contenders left in the race are in a statistical tie.
At Both Ends Of The Political Spectrum Americans Agree The Government Is FUBAR
For the Democrats there is, on the left a socialist, selling a political philosophy that has peviously been anatemas to American voters, yet generating the most enthusiasm of any of the other candidates. On the other end of the spectrum, Republican voters are gravitating, nay stampeding, toward Donald Trump. The only serious rival to Trump is Ted Cruz although it is early days yet and we can expect a compromise candidate to emerge
Could The Unthinkable Happen - Bernie Sanders Looks like Winning Democrat Nomination
At Last, A Candidate I Feel I Could Support Were I An American Voter
Lefties Trying To Troll Trump Show They Are Illiterate Morons
Maverick Sanders surpasses Obama, with $33mn from individual donors
Loud Trump Resonates Throughout America. 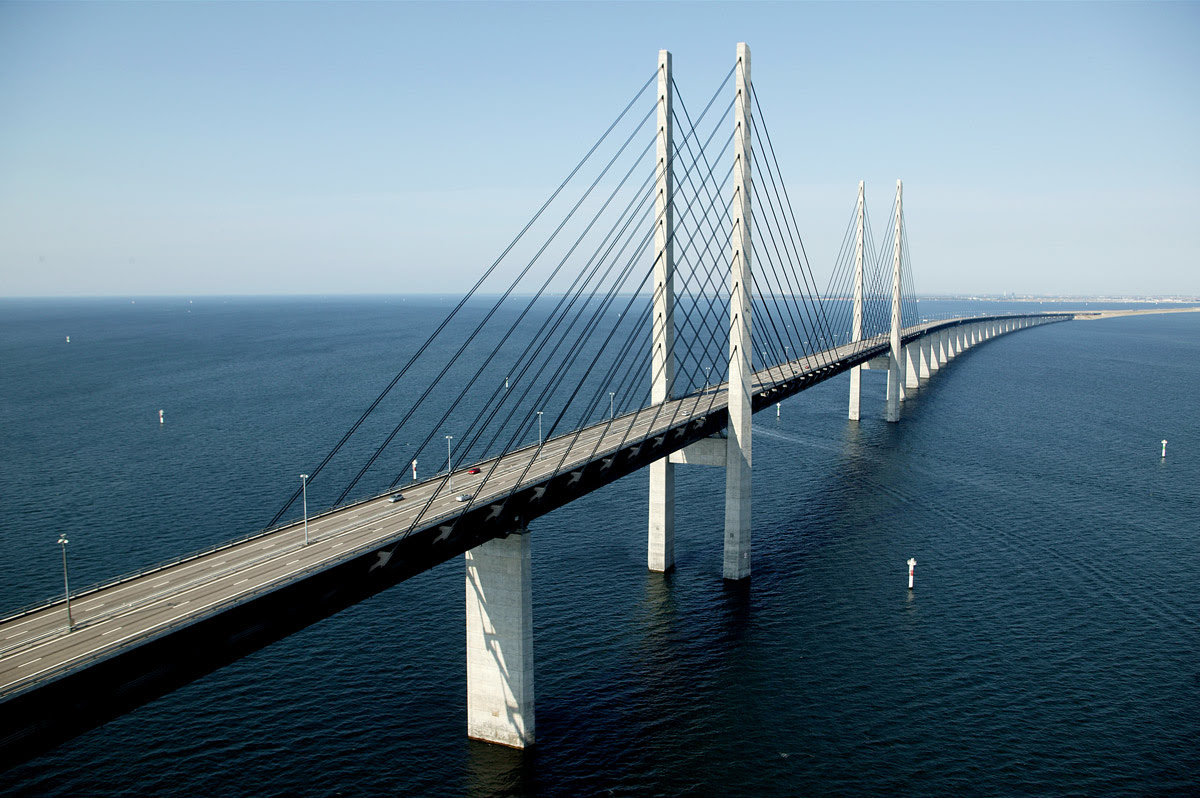 The border is no longer open to all travellers The Oresund Bridge spans the channel between Denmak and Sweden. (Image Source)
As we have reported many times over the past year, Sweden has been more hard hit by the crimes and lawlessness of illegal immigrants from primitive third world societies than anywhere else in Europe. This is because it's relatively small population of around nine million mean migrants make up a larger proportion of the total than in nations such as Britain France and Italy with populations of around sixty million, and also because the seld righteousness of the socialist elite that has governed Sweden for decades led authorities to turn a blind eye to what was going on in cities and towns.

Even the Sweden hating socialists cannot ignore the epidemic of rape crimes, assaults and the general contempt for Swedish society, law, culture and traditions that illegal immigrants from Africa and the middle east have expressed through their actions. While Swedish people are being imprisoned for 'hate crimes' because they have expressed very reasonable ctiticisms of migrants and the Islamic faith, violent hate attacks on Christians are going unpunished in the interests of multiculturalism.

Things are changing however, the problems caused by migrants have resulted in a swing to the right in Swedish politics and the rise of the anti - EU, anti - immigration Sweden Democrat party appears to have shocked the political estblishment so much they have fallen victim to a rare attack of common sense.

From today, Sweden has reinstated border controls and will require migrants to present valid travel documents and work permits as they enter the nation, a major shift from the previous policy of welcoming all comers without question (and not even checking them for weapons). While the move been welcomed by many the news has been received very negatively by the United Nations’ own migratory body which gives every indication it is committed to a course that will destroy European nations. TheLocal, Sweeden reports.

Working to campaign on behalf of migrants and to encourage migration worldwide, (although interference in the domestic politics of member nations is not part of its charter) the UN Refugee Agency announced in a press conference: “Unfortunately, it looks as though those wishing to gain asylum to Sweden will have to present valid identification… There is a tremendous strain to be on the run and you can not expect that those who are entitled to asylum will also have the right documents with them from the beginning – it is quite impossible.

“But that’s where we find ourselves now, unfortunately. We look on this with growing concern”.

The idiocy of these people is utterly gobsmacking. When the terrorist group ISIS has announced its intention to flood Europe with jihadists posing as refugees, how is it unreasonable to control who enters a nation.

The reinstatement of border controls by Sweden, probably the softest of soft touches for bogus refugees among European nations could trigger a wave of similar moves across Europe, as hardening attitudes towards migrants become more acceptable to the otherwise reticent media and political elites. The supranational bureaucracies and the smooth faced deal makers who lead them may be horrified that their push towards global government (to which the elimination of national borders would represent a huge step) may express anger at being defied but in the end there is nothing they can do if national leaders choose to ignore them.

Despite the rhetoric surrounding the new border checks, which will mean travellers on trains and buses have their paperwork checked as they cross the border into Sweden from Germany and Denmark will actually be effective is another matter entirely. Despite police being deployed to the frontiers they were banned from profiling individuals for passport checks, were under-staffed, and in any case continued to admit migrants even if they didn’t have any paperwork at all, as long as they signed asylum papers. According to official figures, on the first full day of checks there were 1,600 asylum applications — no reduction from the same period in the previous week.

The world is run by wankers.