Organizations That Paid Hillary Clinton From 2013-2015

We asre not globalist at this blog, we are internationalists, all of our contributors love to travel in Europe and elsewhere, and we enjoy meeting the people and absorbing the culture. The DIVERSITY of these cultures and the varieties of way human communities make their society work is endlessly fascinating. But we are not globalists, we believe in nations running their own affairs without meddling from the big powers or supranational bureaucracies. Call us old fashioned if you like possums but we think the Westphalian system worked well.

And so, though not Americans, we dread the prospect of another incompetent liberal meddler following Barack Obama as US President. Because not only is Hillary a hypocritical liberal, she claims altruistic motives but is really the ultimate corporate crony, even more driven by self interest that Obama has been. A look at the list complied by The New York Post of corporate
clients that paid Hillary for speeches and such (aka buying influence with someone likely to become President of The United States) shows she is the kind of person who will happily take money from the richest, most ruthless corporate clients while being hypocritical enough to present herself as a friend of the poor FFS.

The actual list of corporate clients that paid Hillary Clinton a minimum of $225,000 for her speeches is too long to publish here, follow the link if you want to see them all.. Even if she was someone who had  built up a moderately successful business into a Billion Dollar international property and leisure empire, and could consequently claim to be a business mogul that's a lorra lorra money for a half hour speech (and she isn't a great orator by any means).

So if you are one of those naive people who is thinking of voting for Hillary because fairness and equality, read just a few names from a long list of firms that between them paid Hillary Clinton $21 million in 2015 for doing very little, ask yourself what they could have been expecting in return for that kind of money. And then think again about whether you want such a greedy, self inteested person as president a nation that has the world's most powerful economy and some of the most appalling levels of deprivation in the world.. 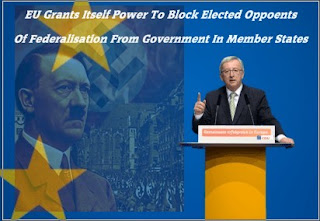 Jean Claude Juncker the President of the unelected European Commission, the executive arm of the European Union (EU) or more accurately the bureaucratic dictatorship that now runs Europe has vowed to block all 'right wing extremists' from power across the continent, shortly after acquiring the power to exert “far-reaching sanctions” on elected governments. Juncker and his European Commission colleagues have a rather idiosyncratic definition of what constitutes right wing extremism. To them a 'right wing extremist' is anyone who opposes their plans to turn Europe's twenty eight member states into a single fascist dictatorship.

Before the final run off for the Austrian presidency last Sunday, Juncker promised to overturn the result and exclude conservative, anti immigration candidate Norbert Hofer, the leader of Austria’s Freedom Party (FPÖ), from all EU decision-making if he was elected. In the event, as we predicted, from holding a comfortable lead with only twelve per cent of the vote to be counted, Hofer was narrowly beaten by a left wing extremist who supports uncontrolled immigration, open borders and the surrender of Austrian sovereignty to the Nazi European Union superstate.

“There will be no debate or dialogue with the far-right,” the authoritarian liberal bureaucrat told Agence France Presse.

The FPÖ has been Austria’s top-polling political force for some time. However, after leading the pack for most of the presidential race, the right-wing candidate lost out by 0.6 per cent to the Green party, after the inclusion of postal votes, and months of Europe’s mainstream media calling the centre-right right Hofer a "far right extremist".

Populist social conservatives are regularly topping the polls across the Europe, but have been victims of EU orchestrated stitch ups to keep them out of power and ddeny the democratic will, in France, Sweden, Holland, and now Austria – and anti-migrant populists are already in power in Hungary, Poland, and the Czech Republic.

Mr. Junker’s definition of “far right” is somewhat broad, noted by him previously describing Hungary’s conservative president, Viktor Orbán, as a "fascist". This is wonderful unintended irony from Juncker (or the man reputed to have brandy for breakfast was simply too rat arsed to know what he was saying) because the tree EU Presidents, Juncker, Martin Schulz (European Parlaiment) and Donald Tusk (Council of Europe) have all shown considerably more fascist tendencies than Mr. Orban.

With the continent-wide democratic surge against the fascist E U, the anti-democratic Commission could be in for a challenge in their attempt to exclude each and every elected government they deem to be 'far right' (i.e. opposed to their authoritarianism and lunatic policies).

However, as of 2014, the Commission granted itself a tranche of new powers that it now intends to use to do just this, powers already being mobilised against Poland’s elected, conservative leaders.

The Commission can now invoke a “rule of law mechanism” (Article 7 TEU) against nations it perceives as deviating from "the common constitutional traditions of all Member States." Ultimately, "far-reaching sanctions" can be exerted, and a country can be stripped of all voting rights in the EU and have funding blocked.

In January this year, Frans Timmermans, the first ever unelected Commission “vice president,” who is in charge of "human rights," used the mechanism for the first time against Poland’s government which came to power in a record-breaking, landslide election in 2015. We should remember that the E U also deposed elected governments in Greece and Italy a few years ago, when the leaders of those nations defied Brussels diktat on austerity.

Mr. Timmerman and Commission gave Poland an ultimatum and deadline to back down by, which expired yesterday. As reported by Breitbart London today, the commissioner has now travelled to Poland to “negotiate” with the government there. There is no precedent to indicated what will happen next.However, the backlash has already begun against the new, explicitly anti-democratic EU Commission. Hungary’s Victor Orbàn has vowed to help Poland fight the Commission, and other Eastern, Visegrad group nations are likely to join the growing coalition.

Brexit: Another Honest Opinion Of The EU

On the day that UK Prime Minister David Cameron lost the plot completely over the EU 'Brexit' Referendum by accusing people intending to vote LEAVE of being unpatriotic, a member of another site where I promote myself another site left this articulate and passionate comment explaining very clearly why she will vote OUT in the EU referendum:

from Rowena: To be honest, I see a vote for out as a vote FOR Europe. The EU, as both Remain and Leave campaigns are happy to declare, and as millions of fellow Europeans agree, is in serious need of reform. Yet somehow a remain vote will help this happen? I don't buy it. Not when it seems patently obvious that the Eurocrats in charge don't want reform; they want more of the same. Even the monthly move of the European parliament from Brussels to Strasbourg, which costs €100m+ annually and is widely regarded by EU employees themselves as ridiculous, can't be changed.

The only thing I can see having a chance of causing real reform is a real shock to the EU status quo. Brexit. Even if that reform is, ultimately, of the break it up and start from scratch variety.

I'm not even going to go into the inherent racism of our current migration system, where the likelihood of any more of my Malaysian family being able to live and work here, even for a short while, is close to zero, no matter how many skills they might have that could be of serious benefit to our economy.

Just look at those European countries who are seriously suffering now. Massive youth unemployment. Unable to devalue their currencies in order to kick start a boost in trade. Falling birth rates as people are scared to have kids that they can't afford. What is the EU proposing to do in order to help these countries? There doesn't appear to be a plan.

I do think that our economy is likely to suffer in the short term. Markets hate uncertainty and it's going to take a while and some serious wrangling to sort out trade agreements, especially with some terribly affronted and petty bureaucrats. But we need to look longer term if we are seriously to consider what we want for future generations.

And us leaving may provide the impetus for others to leave - others who, I assume, would be only too happy to form agreements with us for trade, migration, security and other issues.

Why is the EU seen as the only way for European countries to collaborate? Perhaps because it holds too much power over individual countries. How can this change?

I don't see the virtue in going down with a sinking ship, especially when I don't believe it to be the best way to save fellow European passengers.

I love Europe. I'm proud to be European. I'm voting out.

Absolutely right. A lot of lefties and globalists are supporting 'Remain' because diversity

But it is neither racist nor Xenophobic to oppose mass migration and the deliberate destruction of our national culture. I am anti EU, anti mass immigration and anti globalisation, but I love the European nations I have spent time in and their people and cultures. And because I enjoy the DIVERSITY, I want Britain to stay British ( warts and all) and the French, Germans, Italians, Spanish, Portuguese, Danes and Swedes and Belgians to stay as they are too. Where's the effing diversity in living in a pan European federal superstate whose Nazi founders aim was to abolish national identity and imposed a synthesised monoculture?