The woke left are scaring voters into supporting Trump

Written for RT by Tony Cox, a US journalist who has written or edited for Bloomberg and several major daily newspapers. 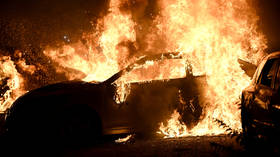 Cars burn in a lot as protests turn to fires after a Black man was shot several times by police in Kenosha, Wisconsin, U.S. August 24, 2020 © REUTERS/Stephen Maturen


Democrat presidential nominee Joe Biden has the right strategy in campaigning from his basement, staying mostly out of public view to avoid exposing his cognitive deterioration and his bad ideas.
If only far-left activists could have done the same, staying in their mothers’ basements until after election day, Stealthy Joe might just be able to glide to victory. He might have become president without really having to show voters whether he can coherently utter an unscripted sentence or offer a platform beyond “Trump is evil.”
Luckily for President Donald Trump, the woke mobs have been more active and visible than ever. Americans are getting a chance to see more and more what the woke brigades are about, and in this case, to know them is not to love them. Voters also can’t help but notice how the cowards who run the party are trying to condone, ignore or deny away the reality of what’s happening in the streets.

It’s gone so far that this week’s rioting in Kenosha, Wisconsin, escalated to the point that CNN host Don Lemon sounded the alarm Tuesday night, warning that Biden will lose votes in November if he doesn’t stand up to rioters. “This is a blind spot for Democrats,” Lemon said. “I think Democrats are ignoring this problem or hoping that it will go away. And it’s not going to go away.”
A Pew Research Center poll published this week concluded that violent crime is a major issue according to 59% of voters (almost as much as coronavirus): 74% of Republicans and 46% of Democrats. But during the DNC, held after the poll was already out, the issue wasn’t addressed at all. Democrats talked about police violence, but not riot violence.

Another sign that things are changing came from a Zogby Analytics poll, Trump’s job approval numbers are now at record high levels. Polls -and pollsters- can be biased, and so can the press quoting them, but to see three in a row, Reuters/Ipsos, Rasmussen, Zogby, all reporting similar movement, may still be significant.


Buoyed by blacks and independent voters, as well as urban dwellers shocked by the Black Lives Matter protest violence raging in some cities, President Trump’s approval rating has hit a new high, according to a survey heavy with minority voters. The latest Zogby Analytics poll just shared with Secrets had Trump’s approval at 52%. “The president has recorded his best job approval rating on record,” said pollster Jonathan Zogby.

At their convention last week The Democrats pushed Trump’s Republicans into the role of the party of law and order, and they’re all too willing to take up that role. But I was wondering about something else, or “bigger”, this morning. That is, Joe Biden et al are very light on policies, in their view their most important issue is to get people to vote *against* Donald Trump, rather than *for* Biden.

And these latest figures plus the Democrats refusal to criticise Black Lives Matter suggest maybe that’s starting to boomerang, to blow up in their faces, whether perhaps people are beginning to lean towards NOT voting for Joe Biden, instead of NOT voting for Donald Trump. In that context, it appears telling that according to a new Reuters/Ipsos poll, Biden, always an uninspiring candidate, saw no “convention poll bounce” in his numbers after the DNC, while ironically, Trump did.


Paul Joseph Watson, Summit News
24 August, 2020
After a night of rioting and looting in Kenosha, Wisconsin, one of the buildings to catch fire was a community church which displayed a marquee outside the building celebrating ‘Black Lives Matter’.

Picture: News screenshot via Summit News
Oh, the irony.
Kenosha was hit by violent unrest after a video emerged showing a police officer firing several shots at close range into an African-American man’s back.
Jacob Blake is currently in serious condition at Froedtert Hospital in Milwaukee as of early Monday morning.
The fact that Blake had walked away from police and attempted to reach inside his vehicle before he was shot didn’t seem to matter to BLM protesters, who almost immediately gathered at the scene of the shooting.
A state of emergency was declared after an officer was knocked out with a brick, stores were looted and numerous fires were started by the rioters who subsequently attacked a courthouse… Continue reading >>>
MORE ON RACE ISSUES
[Daily Stirrer] … [Boggart Aboad] … [ Greenteeth Home ] … [ Medium.com ]

June 3, 2020 Anti – racism protestors enjoy their immunity? It must be well known to our readers that the collective opinion of contributors to this blog on “scientists” and “experts” is that they are all wankers. This does not include practicioners of the sciences who have the self awareness to describe themselves as chemists, biologists, physicists, medical … END_OF_DOCUMENT_TOKEN_TO_BE_REPLACED