Adolf Hitler: His Part In Our Downfall

In Britain the news is all about the 'Brexit' vote, should Britain leave the undemocratic, unaccountable and increasingly authoritarian bureaucratic dictatorship known as the European Union or should our brave nation that not very long ago dominated the developed world militarily and economically, surrender our freedom and national sovereignty in order to reap the dubious benefits of being ruled by a bunch of unelected, tesicularly deficient, smooth face office boys. If you are a British voter this free e book might help you make up your mind. If you are not British but wonder what it's all about, this book explains it all from the Nazi roots of the European project to the expansionist ideas of the ruling elites who want to stretch Europe beyond its geographical boders so they can rule the middle east and north African too. 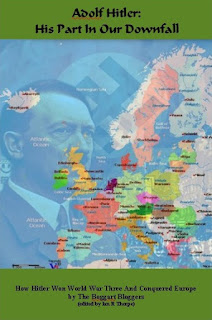 An incisive examination by someone who has worked in the European Union, of the true ideology that underpins this undemocratic and unaccountable.
If you have been worried by EU bureaucratic waste and unaccountability this 35,000 word free ebook is a must for you.


The title is a parody of the hilarious war memoir Adolf Hitler, My Part In His Downfall by British comedy genius Spike Milligan, but the subject matter is very different.
While Milligan tells of how a poorly armed and ill prepared conscript army defied the Nazi advance through Europe, the middle east and north Africa,, this book, by various authors and edited by Ian R Thorpe traces the well documented origins of the European Union in Nazi ideology and demonstrated how a bureaucratic elite with ambitions to rule the whole of Euroipe, along with the middle east and north Africa, has insidiously extended its control of sovereign states lawmaking and policy making processes in fulfilment of the aim first stated by Hitler's aides of 'ever closer unity' leading to a federal European superstate.
If you have believed the propaganda of EU supporters and dismissed the idea of Nazi Europe as a 'conspiracy theory', this 35,000 word book will probably change your mind if you are prepared to read the case made by its authors.

Adolf Hitler: His Part In Our Downfall - free download for Kindle


Adolf Hitler: His Part In Our Downfall
as a .pdf or read online. Other formats to follow in the next few days.

Having done more over the past decade to destroy European Unity (which was always something of a fairy tale anyway), Angela Merkel now wants to rescue it.

Hausfrau Volksfuhrer Merkel is not leading a bid by German politicians to devise a plan to lift the anti-Russian economic sanctions the USA's Obama administration bullied the EU into supporting. Berlin plans to abolish a range of trade restrictions imposed at Obama's insistence after Russia annexed Crimea following ethnic cleansing of Russian speakers in the area by the US backed regime in Kiev. Germany hopes that in exchange for removing sanctions Moscow's assistance in the organization of the local elections in Eastern Ukraine will be secured, according to Der Spiegel. Crimea - in dark red - was traditionally part of Russia until the 1950s, when Ukraine was still a Soviet Republic
In August 2014, the EU and the US imposed economic sanctions on Russia, accusing Moscow of fueling civil conflict between pro Russian rebels and the neo - Nazi regime put in place after a CIA backed coup deposed the democratically elected government. Russian authorities have repeatedly denied the allegations and in response introduced a food embargo that negatively affected the economies of a number of European countries. In other words, while Obama's sanctions have not affected the USA which has very little trade with Russia, and has been a minor inconvenience to Russia because they can get what they need from non EU countries, a lot of smaller EU nations with fragile economies have suffered damaging effects.

Until now, Germany's position on the removal of imposed restrictions has been not until the Minsk agreements are fully implemented, the article said. Now, however, Berlin is willing to make concessions and ease sanctions if the countries are able to reach at least some progress in the Minsk process. antagonising Russia has hurt Germany, already beset with massive domestic problems, too.

"I have always held the position that the sanctions are not a goal in itself. The easing of sanctions can be discussed if visible progress in the implementation of the Minsk agreements is achieved," German Foreign Minister Frank-Walter Steinmeier is quoted as saying.

According to the magazine, Berlin is likely to unilaterally lift some sanctions in exchange for Moscow's assistance in the organization of local elections in Eastern Ukraine. However, the move will probably include the removal of a travel ban rather than restrictions which are of actual importance for Russia, such as financial sanctions or sanctions imposed with regard to Crimea.

"In this way, Germany seeks to maintain EU unity and to reconcile the supporters and opponents of the sanctions," the magazine wrote. A few weeks ago we reported that the resistance within EU, mostly among the Visigard group natioons, against the continuation of sanctions is growing. It is becoming increasingly difficult to achieve a common position on this issue, he said. According to the magazine, the most important goal for the German government is to keep unity within the EU so that the Russian President does not get the impression that he can split European countries.

RELATED POSTS:
Soros Encourages Obama Administration To Further Interference In Ukraine
While western leaders continue to pose as the guys with white hats in the confrontations with Russia and China, hacker collective CyberBerkut has leaked some hacked documents which show Russia is not behind the escalation of provocation, but the guys in black hats who really run western governments, led by George Soros.

Ukraine President Has Tripled His Wealth While In Office
Ukraine is in a mess, the civil conflict goes on, with sporadic outbreaks of violence. The economy is in tatters, unemployment and inflation are out of control and many Ukrainians cannot afford basics like food and energy.
World War Three? Kiev Reinvades Donbass, Deliberate Provocation Trashed Minsk Agreement
When America wants to provoke Russia it uses proxies, a rabble in Libya, Islamic fundamentalists in Syria and Iraq and neo - Nazi thugs in Ukraine. So far Russia has resisted the urge to kick Obama in the balls, but sooner or later the Russia - China - Iran alliance will respond.
US Presidents Of The Past warned Against Secret, Shadow Government.
By now it should be obvious that peacemake, joybringer and putative aquatic pedestrian Barack Hussein Obama was never really in charge of the US Government. Whatever Obama said would happen, all the American government's policies ensured the opposit would happen. The embedded article throws some light on how the US government really works
Teacher Forced To Resign For 'Sharing' Material Critical Of Obama And His Beloved Muslim Terrorists
The supporters of the wannabe King of the American Empire like to describe themselves as 'liberal', 'progressive', and left wing. If they were really any of those things they would not be as fanatically committed to the idea of suppressing free speech as they are.


According to as yet unconfirmed reports from Iranian news agency Farsnews, "Saudi Arabia has sent around 5,000 Takfiri mercenaries to fight against the Yemeni army and revolutionary committees," Yemeni Army Commander Colonel Abdel Sattar al-Boushali told FNA on Saturday night.

Libya, Syria, Yemen: Sectarian conflict threatens entire Middle East
Another failure of US foreign policy leads to threat of war as a coalition of 10 Sunni Arab states launches a military offensive against Shiite Houthi militants in Yemen, recently proclaimed by America’s president as a brilliant example of war on terror, but now catapulting the Middle East into the inferno of battle.

Aside from Washington's usual lust for war, and the enthusiasm of American politicians to act as cheerleaders for death and destruction (so as to secure their billions in military industrial complex campaign donations, (graft, bungs, slush money, payola), a key part of a new bill before the House of Representatives which calls for lethal aid to Ukraine, has nothing to do with Ukraine at all.
U.S. versus Russia War: Top Russian Politics Scolar Stephen Cohen Tells The Truth

We have been blogging for four years about the US drive for war, provocation of Russia in Syria, Iraq, Ukraine and elsewhere made it obvious. But I'm just a news junkie with a strong sense of curiosity and have wondered why the US seems set on this course. Good to see experts like Stephen Cohen, a prominent expert on, Russia are coming onside.
Venezuela's Maduro given executive powers to face U.S. 'imperialism'

We have learned via Reuters news feed that Venezuela’s National Assembly on Sunday (15 March) voted Sunday to grant President Nicholas Maduro powers to rule by decree in defense and security affairs amid an escalating confrontation with the US Government in Washington. The special powers were approved by a show of hands in the assembly after two hours of debate ...