Those climate change scaremongers are at it again, we get a few days Mediterranean style hot weather here in the UK and the climate sciencetits are screaming that we are all going to die unless we cancel civilization 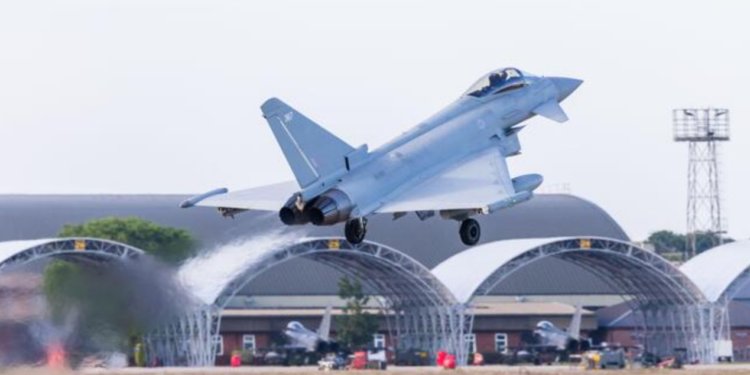 The climate Thermageddonites got their U.K. heat record of 40°C in the end, courtesy of a measuring device in Coningsby, Lincolnshire. The BBC noted on Radio 4 last night that the record temperature arose in the “village” but co-ordinates on the Met Office site place the device halfway down the runway at RAF Coningsby, home of two squadrons of frontline, combat ready squadrons and a training base for Typhoon pilots. In joint second place, perhaps to nobody’s great surprise, was Heathrow, one of the busiest airports in the world.

The last two days in England were very hot, probably the hottest for over 100 years, although the possible distortions caused by urban heat (and jet afterburners!) need to be taken into account in the surface record. On the Radio 4 late news, BBC meteorologist Ben Rich explained that the heat was caused by southerly winds bringing hot air from the Sahara. The wind direction then changed to the west, and by the time he spoke on Tuesday evening, the rain was falling in London and the temperature had plunged 20°C. This of course was the sound scientific reason for the high temperatures, although science was laid to one side at the end when Rich said it “feels like a tipping point”.

In a similar emotional outburst, the serial Covid lockdown campaigner Piers Morgan told his audience on TalkTV that if we are not very careful, “we are heading for an apocalypse”. Also signed onto the apocalypse theme was London Mayor Sadiq Khan. He pulled the ‘things were much colder in the old days’ line, by telling Nick Robinson on Wednesday’s Today programme that when he was growing up, “you had heatwaves every 20 years”.

Brendan O’Neill captured the hysterical wittering with an entertaining article for the Spectator. Is anyone else tiring of all this green nonsense, he asked. “There is something medieval about it. There is something creepily pre-modern in the idea that sinful mankind has brought heat and fire and floods upon himself with his wicked, hubristic behaviour. What next – plagues of locusts as a punishment for our failure to recycle?” O’Neill noted the thoughts of the Guardian Environment Editor who claimed we were as “guilty as hell”. He sounded like “one of those crackpot millenarian preachers you’d see on street corners in the old days”. ... continue reding at The Daily Sceptic

Now Even ‘Hockey Stick’ Mann Admits The ‘Pause’ In Global Warming Is Real
“It has been claimed that the early-2000s global warming slowdown or hiatus, characterized by a reduced rate of global surface warming, has been overstated, lacks sound scientific basis, or is unsupported by observations. The evidence presented here contradicts these claims,” the paper in Nature Climate Change says.

It was a story to melt the hardest heart, a tale of global warming catastrophe so tragic even the most stubborn 'denier' would have to accept 'the science is settled' and start campaigning for a one million per cent tax on every gram of fossil fuel burned because the victims were not working class people, but the most irresistibly cute creatures on the planet ...

Climate Change and Leftist Psycological Malware.
It may seem far fetched but it is possible to link the techniques of the climate change / anti capitalist lobby to the brainwashing prorammes used by the Nazis in Germany, Stalin's Soviet regime in Russia and Chaitrman Mao's brutal government in Communist China. Thus it becomes quite similar to malware that infects computer systems. The left do not care about saving the planet, all they are interested in is advancing their totalitarian, globalist agenda.

Fellow Slams The Royal Society as Nothing But a Lobby Group for Climate Change.
Another respected scientist comes out and denounces the science behind the climate change scare as a fraud. The whole thing has been a scam to justify punitive taxes on fuel and enable the rich to make fortunes trading carbon credits. Again it shows what a sack of rogues the climate science community really are.

Temperature Was Not Rising But Climate Chief's Cock Was
RAJENDRA Pachauri, until this week one of the world’s most influ­ential climate politicians, has been grounded in India and barred from the Delhi institute which provided the springboard for his chairmanship of the International Panel on Climate Change, as a third woman came forward alleging sexual harassment.

We said 2014 was the warmest year on record… but we’re only 38% sure we were right - NASA
Nasa admits this means it is far from certain that 2014 set a record at all. Does that mean 97% of climate experts are 62% sure they are wrong? The thing with half-truths is that they generate a glorious fog, but it has no substance. Ask of the spin-cloud a couple of sensible questions and the narrative collapses.

Arrogance, Intolerance, Snobbishness and Corrupt, Self Interested Practices. It's modern science. The world sems to be waking up the the fact that while in the past scientists tended to be rather detached, slightly obsessive people not driven by material goals, the modern science academy has been very largely corrupted by political patronage and corporate money. The academic field of climate science it especially notable for this.


UN IPCC Climate Change Report Will Warn Of 'Severe, Pervasive' Effects Of Global Warming
After various leaks of draft version showed the latest IPCC Climate Change report had at last admitted that the real world behaviour of the global climate showed the mathematical modelling based scaremongering of the climate science lobby to be at odds with the real world evidence, the final published report seems to have been rewritten line by line by the Warmageddonist lobby and their political and corporate masters. Unfortunately the cat is out of the bag and nobody trusts the buggers any more.

Bad News for the alarmists: 'Missing Heat' from Non-Existent 'Global Warming' isn't Hiding in the Ocean After All
The already mortaly wounded cause of climate alarmism has bean dealt another blow in a new study published by a NASA research project carried out at the Jet Propulsion Laboratory in Pasadena, USA.
Satellite observations and empirical measurements gathered by Argo temperature probes enabled the NASA team to calculate temperature variations and thermal expansion in ocean waters over 6000 feet deep.

'There is Only One Planet': The Bemusing Claims of London's Climate Warriors
Apparently blissfully unaware of their hypocrisy, marchers have left placards emblazoned with complaints about the government and environmental issues strewn around on the pavement. The thousands of left-wing activists who descended shouting and stomping through London’s streets no doubt moved on to bars, restaurants or their homes to smugly congratulate themselves on having done their bit for Mother Nature, unsurprisingly not only expecting other people to pay for everything they demand,

After Years Of Denial US Government Admits Geo - engineering experiment
Again the science academe have been exposed as a bunch of crooked, lying, self serving, sociopathic shits who will do anything for a research grant. After yers of denials by scientists, universities and government departments it has finally been admitted that geoengineering experiments ale a likely cause of environmental chaos.

Global Warming Theory Debunked By NASA
NASA, America's National Aeoronautical And Space Agency was in the forefront of the Anthropogenic Global Warming scare. Do you remember 'The Science Is Settled'? Well it wasn't, a trickle of thoise really awkward bastards who insist on thinking for themselves became a torrent and now even NASA are admitting it was all a hoax based on dodgy statistics and fraudulent physics.