US Democratic Party presidential candidate Hillary Clinton launched a hysterical, irrational attack, filled with half truths and blatant lies, against the most prominent figure in the campaign to get Britain out of the EU (Brexit), UK Independence Party leader Nigel Farage, during a speech at a rally today. Mrs Clinton, responding to Farage's address to a large and enthusiastic audience at a Donald Trump rally, may have been rattled at the prospect of having such a hihly effective campaigner in the rival camp, a man so eloquent, comparisons expose the "soaring rhetoric" of Barack Hussein Obama for the banal, platitudeinous drivel it has always been. 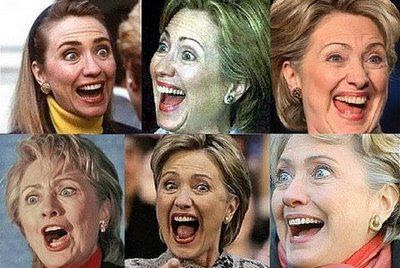 Crazy Hillary Clinton (image source: skewsme.com
Mrs. Clinton ranted at some length about the outgoing UKIP leader who appeared at a rally for her political rival as well as slamming Trump for having Farage appear on stage to talk about the Brexit vote. Ignorant, ill-informed and egomaniacal as usual, Hysterucal Hillary even suggested the UKIP leader of being in bed with Russian president Vladimir Putin, solely because Farage once appeared on a Russia Today television broadcasts. He has expressed admiration for Vladimir Putin's leadership qualities, but has never endorsed the Russian leader's politics.

"Just yesterday, one of Britain’s most prominent right-wing leaders, a man named Nigel Farage, who stoked anti-immigrant sentiments to win the referendum to have Britain leave the European Union, campaigned with Donald Trump in Mississippi," Clinton said, completely inaccurately. nigel Farage is far more liberal than Hillary Clinton or barack Obama, in fact Farage actually understands that liberalism is a rejection of most of what the war - loving, crony - capitalism supporting US Democratic Party stand for.

"Farage has called for a ban on the children of legal immigrants from public schools and health services, has said women are quote “worth less” than men, and supports scrapping laws that prevent employers from discriminating based on race — that’s who Trump wants by his side.The godfather of this global brand of extreme nationalism is Russian President Vladimir Putin," Clinton outrageously claimed.

Mr. Farage has told Breitbart London exclusively: "I think Hillary Clinton is running scared. Her attacks on me are completely baseless. She sounds rather like the bad losers in Britain who can’t accept Brexit and keep trying to launch legal challenges to overturn the democratic vote. He added: “Perhaps Mrs. Clinton should spend more time speaking to normal, working people in her country than trying to attack me using dodgy half-quotes".

Far from suggesting that the children of legal immigrants be banned from public schools, Nigel Farage made the prefectly reasonable suggestion that people who have not paid in to the UK tax system should not be the beneficiaries of public money until they have begun to contribute. His comments, taken wildly out of context by Mrs. Clinton, also included the idea of having private insurance to use Britain’s public services – a common thing in the United States.

He has also previously acknowledged that women who take maternity leave are perceived by employers to be "worth less" than men, but has never said whether or not he believes that is fair. He also supports scrapping EU discrimination law, but has stood by the fact that the British parliament could easily enact these laws, if necessary, themselves.

Her comments linking Mr. Farage and Mr. Trump to Vladimir Putin were reported on by Breitbart London recently. It was a “Project Fear” tactic used by the ‘Remain’ campaign during the European Union referendum which Mrs. Clinton and Mr. Obama’s side lost, with a big swing in favour of LEAVE occurring after Barack Obama visited Britain and threatened British voters with reprisals if the vote did not go the way The White house wished.

Mr. Farage has never claimed to be a member of the “alt right” as Clinton accused him of being, in fact he has actively distanced himself from many public figures who are perceived as such. His party, UKIP, which is 23 years old, has consistently stood by the position that left and right are now useless monikers in politics, and that the battle is now about the corporatists and globalists versus average people.


Teresa (the Appeaser) May facing Tory revolt amid signs she’s pushing for softest Brexit possible
Theresa May is facing yet another cabinet revolt, as hardline Brexiteers in the Conservative Party are reportedly furious at her apparent desire for what has become known as a ‘soft-Brexit’ but to us it seems like No Brexit except in name. Teresa the Appeaser would rob us of the few benefits of EU membership while saddling us in perpetuity with all the current disadvantages while adding a few specially created for ex members..


Rebellion Against EU Authoritarianism Escalates As 8th Member Nation Threatens Referendum
Brussels went too far, they crossed the line in moving from an economic union to a political pan - European political empire. In the end it was a race as to which member state would quit first, Britain, Natherlands, Denmark or Italy. In the event it is Britain.

BREXIT vs. GREXIT – The Truth About The European Union And How It Treats Members

Unless the testicularly deficient politicians stand up for their nations he only thing that will halt the European Union's push beyond Europe's geographical borders to incorporate Asian, middle eastern and north African nations is war. Power is addictive and the bean counters of Brussels have ambitions far beyond Europe.


When I had to defriend a Facebook contact because she was arguing in favour of the EU, it was not simply because I support Brexit that I had become pissed of with her, it was the snobbish and condescending way she dismissed supporters of LEAVE and their case. People are entitled to their opinion on the European Union, but they should check the 'facts' they post in support of their arguments.


The Labour Case For Brexit by Kate Hoey M.P.

After my short intro is a savage indictment by Brexit supporting Labour MP Kate Hoey of the way the Labour Party has abandoned the working class and is now trying to betray the party's proud heritage and its roots in the industrial areas by taking Britain into an undemocratic, corporate controlled, capitalist friendly, elite dominated globalist control freak project.

Dutch Referendum This Week Shows why We Should Leave The EU.

Few of you were aware probably that there is an EU referendum vote in The Netherlands this week. As usual with anything negative about the EU barely a word has been printed in the topic in mainstream media and the silence from our notionally unbiased national broadcaster The Bolshevik Broadcasting Corporation (BBC) has been deafening.

Head Of European Institute: Brexit â€˜Betterâ€™ For Everyone

Brexit would be the best result of Britainâ€™s in / out referendum for both Britain and the EU i a Belgian professor who heads up the European Institute at the London School of Economics (LSE) has said.

Essential reading for our american readers who must soon decide who they want as their next president. Important too for non Americans who cannot influence the outcome of the election but are entitled to know why their arses might be blown from here to eternity sometime in the next few years.