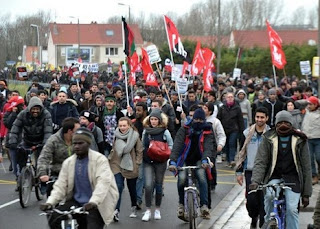 A bunch of migrants march through Calais

Most people who matter (i.e. those who think for themselves) are aware that we are spun a web of lies and government propaganda by print and broadcast media news on every topic to which any controversy attaches. Moreover we are aware that far from being political opponents, UK Labour and Conservative politicians are singing of the same politically correct song sheet. Likewise the US Democrats and Republicans, Frances socialists and conservatives and Germany's Christian Democrats and Social Democrats.

These people rely on our stupidity. They rely on us watching repeat episodes of Spooks and trusting that the government is watching over us. They rely on us using as our sole source of news, government controlled or corporate owned mainstream media and engaging in politics once every few years to cast a vote that has no more significance than a fart in a hurricane.

The left leaning Independent recently published this article,"David Cameron, this is what that ‘bunch of migrants’ is running from" a full seven days on from "bunch-of-migrants-gate".

In the article, Independent Voices writer Nishaat Ismail links to a video of Homs, Syria’s third city, making a totally spurious link between the drone footage and the Calais migrant crisis. It has been established by EU and United Nations aid workers that most of the 'refugees' in The Jungle as the Calais shanty town is known, are from East Africa, not Syria.

But Ms. Ismail is being willfully deceptive. She writes:


Drone footage of Homs in Syria published today shows apocalyptic scenes of a city in ruins after five years of ravaging and relentless war that has claimed the lives of over 250,000 people. The video confirms the sheer and irrefutable destruction that has engulfed the third largest city of the country, now almost razed to the ground. It also accentuates the cold and insensitive words spoken by our Prime Minister David Cameron in last week’s reprehensible installment of PMQs when he referred to people escaping the horrors of war similar to those displayed in this footage as merely a “bunch of migrants”.
Even her previous employer, the Guardian, the most left wing of British newspapers reported: “There are about 1,300 migrants in the northern French port. Most are from Eritrea or Somalia and are hoping to reach England rather than seeking asylum in France.”
Clearly Nishaat Ismail hasn’t done her research. Nor would we expect her to. You see Ms. Ismail, far from being the objective reporter she is presented as, the lovely Nishaat (I don't know whether she is lovely or not but I know the best ways to piss of left wing activists) has a track as one of a growing number of victimhood propagandists who have inflitrated the media, her social media pages littered with ARREST BENJAMIN NETANYAHU posts, links to Islamist-friendly blogs, questionable UK-based Muslim-run charities, and a recent obsession, it seems, with anti-extremism campaigner Maajid Nawaz of the Quilliam Foundation.

This latest distortion is typical of how they operate. Remember that three year old who was lifted dead from a Turkinh beach and how the left immediately portrayed that needless death as the result of heartless western xenophobes and racists who prevent governments from opening the doors of our nations to the three and a half billion third world poor who are 'entitled' to share our prosperity?

And do you remember how that tear jerking narrative was exposed as pure, unadulterated bollocks when it was reveald the kid's Dad was a people trafficker who took his son along on his latest smuggling run for the boat ride. Despite irrefutable evidence supporting that leftist activists and socialists still deny it was so. But then supporters of the left would not recognise truth if it ran up to them and pulled their pisser / ticked their tits (delete as appropriate)

Ms. Ismail, also wrote on the issue of electoral fraud in the London Borough Of Tower Hamlets. She used quote marks to refer to the guilty verdict passed down by a court, and wrote of the affair: The dismissal of Lutfur Rahman is a forewarning for aspiring Muslim politicians who want to have a voice independent of mainstream political parties. If they venture to challenge the status quo, they risk facing the same vilification and slander faced by Rahman and his colleagues.”

Again she excuses criminal acts (electoral fraud) by claiming racism and victimisation. Playing the 'victim' card as trumps is a noted way Islamist extremists recruit young people – making them feel targeted and oppressed by a country that has welcomed three million Muslims, many of whom have integrated, done well and have no problem with British traditions such as Christmas, dog ownership and bacon sandwiches.

She has shared articles about the now debunked “terrorist house” case, when a Muslim boy was falsely reported to have been targeted for a spelling error. She has excitedly shared articles claiming that Hillary Clinton is not pro-Israel.

Ms. Ismail boasts about her links to the Al Khair Foundation – a group that was set to host Salafist ideologue Dr. Zakir Naik, who claimed, according to the Independent itself, that “every Muslim should be a terrorist” and expressed support for Osama Bin Laden.

Hardly what one would call impartial and objective then. What is most disgusting however is that the precious meeja darlings who run the independent continue to give this person a platform from which to use lies in order to promote Islamic extremism.

Jews Fleeing From France In Record Numbers Because Of Antisemitism
Europe's new wave anti - semitism. Jewish people are fleeing france but not because of Front National or nationalism. The stupid, self righteous left alone must take credit for this outbreak of Jew hating.
Indonesia Tells Aussie Loudmouth Tony Abbott, STF UP Over ‘Reform Islam’ Call
The solidly Muslim government of Indonesia has attacked former Australian Prime Minister Tony Abbott after he said that Islam needs to be reformed. Sources in Indonesian capital Jakarta dismissed Abbott's comments as “unhelpful” and “divisive”. Ambassador to Austrialia responded to Mr Abbott’s critique by adding that violent extremism is “common in all faiths.”

Christians Are Not Safe In Europe, European Parliament President Says
In a meeting on religious tensions in Europe today (3 December, 2015), European Parrliament (EP) President Martin Schulz said that the persecution of Christians in Europe is under - reported and does not receive enough media attention, which has also meant that it "has not been properly addressed".
Multi-Cultural England: Are You Feeling The Progressive Diversity.

As racial and sectarian tension increase on the streets of britain while politicians gear up for the election campaign, we take a look at the state of Britain today, Imigrant child abuse gangs, Clerics of alient faiths dictating moral strictures, and everywhere we look, foreigners being given provieged status. Is it any wonder the voters are angry?
Charlie Hebdo: No Wonder There Are Conspiracy Theories
With a little distance between us and the Charlie Hebdo killings, questions remain unanswered and are likely to remain so. These questions inspire conspiracy theories, which in turn trigger authority worshippers to dismiss anyone who asks legitimate questions as 'right wing nut jobs'...The War On Terror
A large collection of articles with an active contents list, this page looks at the war on terror being waged by the USA and the democratic nations of the developed world. At the moment freedom does not seem to be winning.
Lawless, Leaderless Libya Becoming Terror Hub
As the French government calls for international action to halt the development of Libya, a failed state since GFadaffi was deposed, as a hub of international terrorism, we wondr when western leaders will learn that all their interventions so far, Libya, Afghanistan, Iraq, Egypt, Syria, Ukraine, Mali, South Sudan etc. have caused far bigger problems that the ones they hoped to solve.
We Have Been Threatened - It's Our Duty To Carry On As Normal

The NATO summit on Ukraine and ISIS wound up yesterday having achieved exactly what it was expected to achieve - nothing ... There was some kind of agreemant that Britain will join the US is launching air strikes against the Islamic State militias ... A war against ISIS would be a continuation of the war waged in Iraq from 2003, initially to overthrow the tyrant Saddam Hussein, and since his capture to restrain the wannabe tyrants queueing to replace him.
What A Joke These Leftie Hypocrites Are

Much of the build up to the NATO summit at Newport's Celtic Manor on 4 and 5 September, which will attempt to formulate a united strategy for dealing with 'threats' to western security in Ukraine and Iraq, has been focused on the world leaders who will be attending, along with the security operation