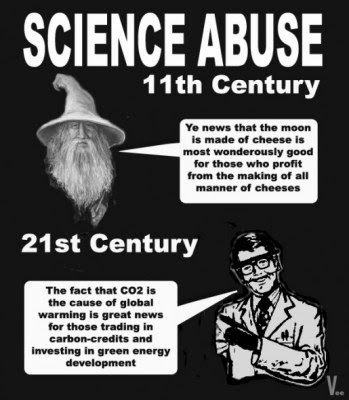 I've had many arguments with the Warmageddonists, the people who have been saying that the 'scientific consensus' had agreed if we did not shut down all coal, oil and gas related activites (that is, just about all human activities except unprotected sex and sleeping) the earth was going to turn into a giant furnace and we would all burn.

Those of us audacious enough to ask when this was going to happen felt the horizon shifting. When the scaremongering first started, the deadline for frying was "after dinner". Then it go to "Tomorrow ...... or the day after tomorrow perhaps," then "next year", "before 2050," and eventually "soon."

Don't you love that scientific precision.

The reason the Warmageddonists and CAGWARTS could not give a sensible answer of course was that the scientists were studying computer models of reality and worse, they were changing the fictitious data they put in when the algorithms did not give the answer they wanted. In the real world, rather than warming like a fire someone has dumped a few gallons of petrol on, the earth ws warming a tiny little bit, just as it always has.

What's more while the Warmageddonists screamed "the science is settled" and insisted that "97% of scientists agree global warming is happening faster than the models predict and will wipe out man, beast and beetroot if we do not stop living NOW!

There was no such scientific consensus, the study cited as proof of it had falsified the figures by looking at a lot of climate studies and simly assuming any that did not specifically state climate change was NOT being caused by carbon dioxide emissions from human activity agreed with that proposition that it was.

In fact most of those studies did not even look for causes but at likely effects.

The purported but ridiculous derogatory term "climate deniers" was invented to belittle people intelligent enough to question the dodgy science on which the Warmageddon scare was based, although none f the sceptics had ever tried to deny that there is a climate (there are in fact many, depending on what part of the world you are in).

But all the while as the Warmageddionists screamed "scientific consensus and demanded a one million per cent tax be put on everything their puritanical left wing prejudices dictated was not polititically correct, sensible researchers were looking at many possible causes of the changes in climate that have happened in cycles for billions of years. Like this one:

Global warming theorists have taken yet another hit with a new study out of Denmark which demonstrates that variations in Earth's orbit are the primary causes of climate change, and have been for at least the last 1.4 billion years.

Scientists from the University of Southern Denmark and the China National Petroleum Corporation investigated marine sediment from the Xiamaling Formation in China and determined that the sediment shows evidence that "the same orbital forcing that caused the climate to change 1.4 billion years ago is the underlying force behind global warming today,

The research, published in PNAS (Proceedings Of The National Academy Of Sciences Of The United Stastes Of America), states: "There is a wealth of evidence pointing to dramatic short-term climate change on Earth over the last few million years. Much of this climate change is driven by variations of Earth's orbit around the Sun with characteristic frequencies known as Milankovitch cycles."


The fact that the research has been published exposes the lying nature of the Warmageddonist lobby. They have always argued that no respectable scientific journal would publish any research that did not support the consensus because "The Science Is Settled". RELATED POSTS:


Fellow Slams The Royal Society as Nothing But a Lobby Group for Climate Change.
Another respected scientist comes out and denounces the science behind the climate change scare as a fraud. The whole thing has been a scam to justify punitive taxes on fuel and enable the rich to make fortunes trading carbon credits. Again it shows what a sack of rogues the climate science community really are.

Another Kick In The Bollocks For Warmageddonists And CAGWARTS*
I've had many arguments with the Warmageddonists, the people who have been saying that if we did not shut down all coal, oil and gas related activites the earth was going to turn into a giant furnace and we would all burn. When the scaremongering first started, the deadline for frying was "after dinner". Then it got to "Tomorrow ...... or the day after tomorrow perhaps," then "next year", "before 2050," and eventually "soon." U.N. Official Reveals Real Reason Behind Warming Scare
We said it was a scam, now a United Nations official has admitted the whole climate change scare was really about destroying capitalism. But what doo the elites plan to replace it with, A Corporaite Global Dictator ship in which the world is run by unelected bureaucrats selected from withing a small, elite class? Actually we predicted that as well.
EU Policy Mash Roils Markets Before Paris Climate Deal.
First of two stories which show that while failing in their stated objectives to save the planet, EU and United Nations policies have been outstanding in their real objectives which were to advance the global government agenda and to tighten the control of the wealthy elite on the lives of the masses
Thanks To The Dishonest Climate Scientists, the Public Doesn’t Know Water Vapor Is Most Important Greenhouse Gas.
Yet another exposure of the lies that have propped up the scientific dishonesty and corporate greed behind the global warming scare. Climate change is real, but the climate has changed constantly for millions of years and whatever the final outcome of what is going on now is not likely to be catastrophic.
We said 2014 was the warmest year on record… but we’re only 38% sure we were right - NASA
Nasa admits this means it is far from certain that 2014 set a record at all. Does that mean 97% of climate experts are 62% sure they are wrong? The thing with half-truths is that they generate a glorious fog, but it has no substance. Ask of the spin-cloud a couple of sensible questions and the narrative collapses.
Earth’s CO2 Levels Pass Global Warming ‘Milestone', Nothing Happens - Daily Caller.
After two decades of panic stricken scientists and screeching lefties wailing about the catatrophe that would ensue once the concentration of carbon dioxide (CO2) in the atmosphere passed 400 parts per million, that figure was reached in December 2014.


Insane Science Pushing The Earth Towards Ecocide. At the Daily Stirrer we have suspected it for a log time, science is insane, a game for the ethically challenged and sociopathic to compete to be first to develop a new plague, or a death ray, or to trash the enviromnent in pursuit of political power or corporate profits for their paymasters. There's even a name for what they are doing now, Ecocide.
Arrogance, Intolerance, Snobbishness and Corrupt, Self Interested Practices. It's modern science. The world sems to be waking up the the fact that while in the past scientists tended to be rather detached, slightly obsessive people not driven by material goals, the modern science academy has been very largely corrupted by political patronage and corporate money. The academic field of climate science it especially notable for this.
Climate Change: Study shows carbon dioxide dangers are OVERSTATED
That old demon Carbon Dioxide is in the news again today, not because the scaremongering science screechers have come up with a new lie to sell their 'tax-the-rich' globalist agenda but because yet another group of sensible scientists have found that carbon Dioxide levels in the atmosphere are overstated. Hardly a surprising result when you consider the global figure is derived from measurements taken on the slopes of Mauna Loa, an active volcano in Hawaii.
The left lost the climate change argument, noe they can only smear those who beat them
Retired professor turns whistleblower on climate change The climate change fraud has been exposed
Greenpeace were involved in the climate change fraud
Climate change index