Reuters reports that amid escalation tensions in Ukraine and a resurgence of hostilities in the Donbass region where ethic Russians are opposing Kiev's ethnic cleansing efforts, Russia has deployed its advanced S-400 air missile system to Crimea, the area annexed by Russia following the replacement of Kiev's democratically elected government in a coup known to have been engineered by the CIA on behalf of Washington. 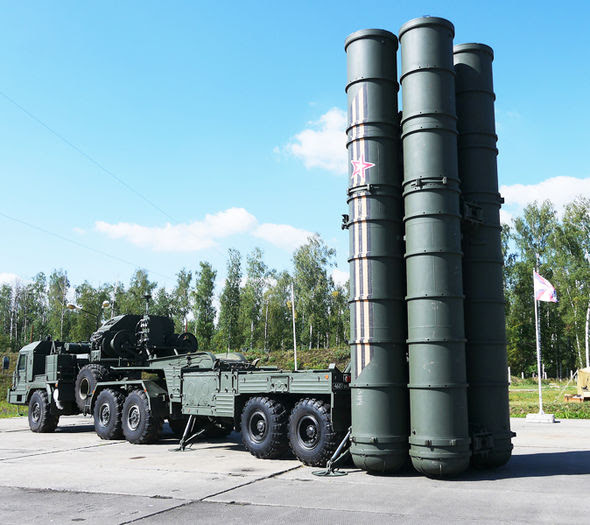 Russian S400 Growler air defence missile system (Image source: Express)
In the latest escalation between the Kremlin and Kiev, it was reported yesterday that Ukraine had deployed troops near the Russia border on combat alert, following an incident that according to Russia was an attempted terrorist attack.

Russia’s secret service, the Federal Security Service, said on Wednesday that it had foiled “terrorist acts” prepared by Ukrainian military agents against infrastructure in the territory, with the aim of disrupting Russia’s parliamentary elections due on 18 September. Kiev denied the allegations. In response to Kiev's alleged actions, Russian president Vladimir Putin said he was pulling out of international peace talks on the conflict in eastern Ukraine. He said he was no longer ready to meet his Ukrainian counterpart, Petro Poroshenko.
This probably means the Minsk peace process, brokered by German chancellor Angela Merkel and France's President Francois Hollande, has been effectively put on hold ( read more here).

Ukraine has denied all accusations, while president Petro Poroshenko and the Ministry of Foreign Affairs rejected Putin's accusations that Kiev is committing terrorist acts in Crimea. "Accusations against Ukraine of terrorism in occupied Crimea are as preposterous and cynical as the statements by the Russian leadership about the absence of Russian troops in Donbass region," Poroshenko said.

President Poroshenko escalated the rhetoric when he announced yesterday morning that he has put all forces forces on the border with Crimea and eastern Ukraine at the highest combat readiness,  and said "we expect Russia to respond in kind very shortly, at which point we will update this story."
Overnight, Russia responded not once but twice.

First, after meeting the security council in Moscow, Putin and the Russian Navy announced war games in the Black Sea. This came only a day after the Russian president accused Ukraine of trying to provoke a conflict over Crimea, which Moscow seized and annexed in 2014.  The Russian Defence Ministry said its navy - whose Black Sea Fleet is based in Crimea - would start to hold exercises in the area to practice repelling underwater attacks by saboteurs. As Reuters adds, there were reports on Thursday evening that the authorities had cut off Internet access in northern Crimea close to Ukraine.

Ukraine called the accusations false and claimed they are a pretext for Russia to escalate hostilities. Such an escalation could be used by Putin to demand better terms in the Ukraine peace process, or to inflame nationalist passions at home ahead of Russian parliamentary elections next month.

The announcement comes after President Putin promised to take counter-measures following reports of clashes between Russian forces and Ukrainian saboteurs in northern Crimea.

Though Ukraine may protest loudly against what it will call an unprovoked aggression by Russia, the real targets of Putin's move is NATO, which as was reported in late May, installed the long delayed US missile shield called Aegis Offshore in the Romanian town of Deveslu. Located a few hundred kilometers from Crimea, and hence, in defensive range of the new Russian rockets, this was seen as part of the USA / NATO to surround Russia with missile bases. Aegis Offshore has also been installed in the Baltic States which prompted Putin to warn that Poland and Romania "are now in the crosshairs."

To hear the wailing and gnashing of teeth from the left of the political spectrum whan anyone in western Europe mentions the need for border controls to stem the flow of illegal immigrants into the European Union from third world nations in north Africa, the middle east and even further afield,st countries to be flooded it would be easy to think that only supporters of fringe groups on the extreme right are resistant to abolishing national borders and allowing the world's most prosperous counties to be flooded with semi - literate, uneducated, unskilled, unemployable wastes of space. In face a recent global survey revealed that a majority of people around the world support border controls.

The open borders scam, which would destabilise advanced societies, is a favourite tool of those who would establish a global government. In fact the main sponsor of 'philanthropic' groups promoting unlimited immigration and free movement of goods and people is none other than billionaire oligarchical collectivist, George Soros as we have previously reported HERE and HERE.

The globalists, having had things their own way for the past couple of decades are however facing a pushback of unanticipated ferocity. The latest demonstration of this comes in a news item from Bulgaria.

As Turkish President Erdogan has threatened Europe with releasing as many as 3 million new migrants, Bulgaria has stepped up its plans of adding a 20-mile-long wall along its border with Greece and Turkey.

Bulgarian authorities have expressed concerns that the closing of Macedonia’s border with Greece might drive migrants to enter the EU en masse through Bulgaria, if Erdogan carries out his threats.

The challenge, said Bulgarian Prime Minister Boyko Borisov, “is not only to keep the channel of communication with Ankara open, but also to ensure that Turkey will not allow the free passage of refugees to Bulgaria.”

Erdogan has said that Ankara will annul its agreement with the European Union (EU) to restrain migrations into Greece if the EU does not lift its visa requirements by October, allowing Turkish citizens to travel freely throughout Europe.

Turkey is home to some 2.8 million Syrian refugees alone, without counting the many thousands of Afghans and Iraqis who are anxious to get into Europe.

“The European Union is not acting sincerely with Turkey,” Erdogan said in a recent interview with the French daily Le Monde. “We have taken in 3 million refugees, whereas the EU’s only concern is keeping them out of its territory.”

The Turkish President has been using the prospect of new waves of millions of migrants to pressure Brussels into accepting his demand that Turkish citizens be allowed to enter Europe freely without visas, which he sees as a first step toward eventual Turkish membership in the EU.


DC Leaks Hack Of Soros Open Society Foundation Reveals How Billionaire World Domination Freak Plans To Control The Media
DC Leaks is a new kid on the block in the whistleblowing business but they are very successfully going after billionaire investor and puppet master. Having already exposed Soros' sponsorship of US terror group Black Lives Matter, and his links with the corrupt and careless Hillary Clinton, they have now reveald how Soros manipulates the media.

The Birth Of Cultural Marxism
Ever wondered when and where the idiotic pseudo -philosophies of hippys and the idiotic and divisive politically correct dogmas of the modern left were born. The Social justice Warriors (aka 'liberals' or progressives' though they are really neither of these things but instead are moralistic authoritarians who hate free speech and personal liberty and support censorship, government control of media and criminalisation of dissent.

If You Look At How Fast Global Trade Is Unravelling, You'll Get Dizzy
Governments constantly make positive noises about the health of their economies although most people who are in work have felt no improvement on the position they were in after the crash of 2008. Wagest are stangnant, employment has reduced somewhat (see below) and while the banks are printing money and the super rich are widening the gap between themselves and ordinary people faster than ever, the real situation is frightening.

Bilderberg: It's That Time Of Year Again
Every year, the world's richest and most powerful business executives, bankers, media heads and politicians sit down in some luxurious and heavily guarded venue, and discuss how to steer the global economy in a way that maximizes profits for all involved, while perpetuating a status quo that has been highly beneficial for a select few, even if it means the ongoing destruction of ...

News From Davos: America Is Finished Global Governance And NWO To Rule
The World Economic Forum held their annual conference at the exclusive Alpine resort of Davos-Klosters this week. Two thousand five hundred politicians, celebrities, and business leaders from all over the world gather every year for this “Bilderberg style” meeting [ ... ] One of the most significant discussions held at this year's Davos powerfest concerned the growing hostility between citizens and the power elites. "If [the] growing disconnect between governments and citizens is not fixed rapidly, there can be no legitimate, accountable and trusted global cooperation, problem solving or governance." - WEF Everybody’s Business Report

The International Elite's Contempt For National Sovereignty
One of our themes in The Daily Stirrer has been the new elise and their push for global government. Here in a cross post with Philo and Sophia we look at the political philosophy behind multiculturalism global view thinking and the push to abolish national sovereignty and hand power to supranational bureaucrats.

CEO Of World's Leading Shipping Company Delivers Downbeat Assessment Of Global Economy
While governments and mainstream media news continue to peddle a rosy picture of economic prospects, achieved by statistical jiggery pokery, money printing and they good old fashioned political ploy of telling blatant lies, the real economic indicators tell us this economic view is an illusion. Every month governments tell us the unemployment figure is down but do not tell us how many people have been eliminated from the figure

New World Order Stopped? Russia Bans Soros Foundation "A Threat To National Security And Constitutional Order"
BOGGART ABROAD 30-Nov-2015: In a statement released on Monday, The Russian Prosecutor General's Office announced the activities of the Open Society Institute and the Open Society Institute Assistance Foundation, both fronts for the gloabalisation and global government promoting Open Society, a political activist group founded and backed by billionaire George Soros, were a threat to the foundations of Russia’s Constitutional order and national security ...

US Presidents Of The Past warned Against Secret, Shadow Government.
By now it should be obvious that peacemaker, joybringer and putative aquatic pedestrian Barack Hussein Obama was never really in charge of the US Government. Whatever Obama said would happen, all the American government's policies ensured the opposite would happen. The embedded article thows some light on how the US government really works
Elsewhere: [ The Original Boggart Blog] ... [ Daily Stirre.shtml ]...[Little Nicky Machiavelli]... [ Ian's Authorsden Pages ]... [Scribd]...[Wikinut] ... [ Boggart Abroad] ... [ Grenteeth Bites ] ... [ Latest Posts ] [Ian Thorpe at Flickr ] ... [Latest Posts] ... [ Tumblr ] ... [Ian at Minds ] ... [ Authorsden blog ] ... [Daily Stirrer News Aggregator]
Posted by Boggart Blogger at 7:17 AM No comments: