Dozens of Rallies Across Germany as Anti-Lockdown Protests Continue 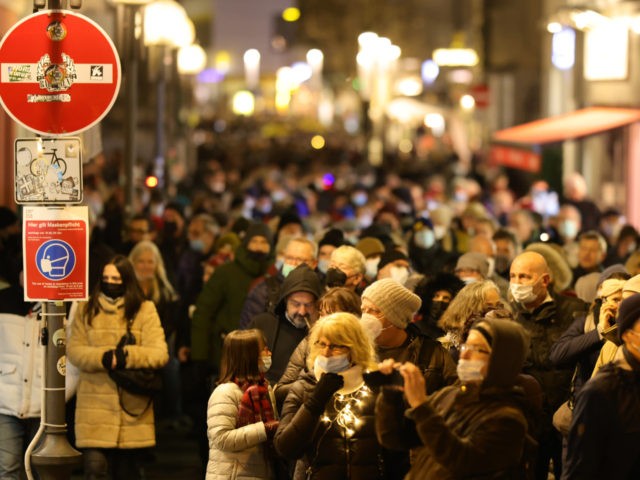 Dozens of rallies have taken place across Germany, as tens of thousands continue to protest COVID restrictions in the federal republic.

Tens of thousands of people took to the street again on Monday in Germany, as dozens of rallies in opposition to COVID rules took place across the federal republic.

The events followed a weekend of anti-lockdown demonstrations in the country, with thousands of people turning up to protests in Hamburg, Saarland, Düsseldorf and beyond on Saturday and Sunday to march against measures.

According to a report by Bild, police counted around 30 separate demonstrations taking place in Upper Bavaria alone, while Die Zeit reported that around 15,000 people protested in Mecklenburg-Western Pomerania across 20 separate locations.

Meanwhile, around 17,300 individuals protested measures in Thuringia, while around 3,000 took part in an unannounced march through the city centre in Cottbus.

A further one thousand also took part in a declared demonstration in Bonn. ... Continue reading >>>

For the past two years we have been trying to report on the crime against humanity perpetrated by the corporate business elites (particularly those corporations that make up The Big Pharma Cartel, the political establishments of world nations, the medical professions and mainstream media under the umbrella of "The Covid Pandemic."
Now, although the groups involved in the propaganda campaign to pump up fear levels in the populations and convince people that a killer disease was rampaging through societies, and that vaccination with experimental, untested vaccines employing a discredited technique, mRNA, which in experiments in the 1980s and 90s was found not only to be ineffective in immunising recipients, but also likely to cause severe illness or injury as it rearranges DNA so that the auto - immune system, our protector since humans began to evolve, is cause to attack healthy cells in our bodies.
Evidence of this crime is now emerging so rapidly us three old guys simply cannot keep up, so we have decided on a daily round up for people who want to expand their understanding by pointing readers to other sites.

Read more »
Posted by Boggart Blogger at 10:40 AM No comments: