While Crazy Joe Biden Claims Victory Over Russia, NATO's Expansion Plans Have Been Derailed By Putin 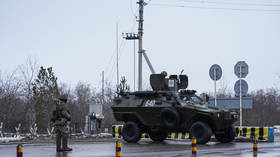 While Joe Biden's administration in the USA continues to beat the war drums about Russian aggression against Ukraine with talk of a Russian false flag even involving an attack on an infants school (in reality this incident was part of the eight year old conflict between Ukranian troops and rebel fighters in the breakaway region of Donbas,) yet simultaneously claims credit for the current de-escalation of tensions on the Russia / Ukraine border (in reality nothing to do with the US President's efforts to provoke a Russian invasion of its neighbour,) NATO’s policy of expansionism at the expense of Russia’s security concerns has suffered a major setback.

The US / UK / European alliance's policy of blaming Russia for everything was never intended to ensure Ukraine honoured its commitments to the Minsk agreements, designed to put an end to fighting in the Donbass, as autonomy in Eastern Ukraine would challenge NATO's (and by extension America's influence in Europe, particularly in among the east European states that gained independence after the break up of the Soviet Union.

Instead, NATO countries aimed to undermine the Minsk agreement of 2014 by constant references to absorbing Ukraine into the alliance, a move Russia would never tolerate, supplying Ukraine with advanced military technolgy to shift the balance of power in the region and neutralise the threat of Russian reprisals should Ukraine try to end the rebellion by using overwhelming force to crush the ethnic Russian Donbas rebels. On top of that stringent economic sanctions  were intended to weaken Russia while Ukraine was to be strengthened economically through being granted strategic partner staus by the EU.

It was obvious last year, asfter seven years of conflict that the Minsk agreement was not working and needed to be renegotiated but instead Ukrainian forces mobilised along the border of Donbass while the government in Kiev, backed by NATO and the EU, threat ened to retaking the region by force. Only fools would ever suppose Russia or Vladimir Putin would tolerated such behaviour but nobody has ever accused the junta of neo - Nazis installed in Kiev by NATO and Washington after 2014's colour revolution of being intelligent.

Predictably Russia responded by moving extra troops and military hardware to te already heavily garrissoned Ukraine border. NATO responded by pledging their support to the authorities in Kiev and threatened Moscow with devastating sanctions if it moved against Ukraine in defence of the breakaway regions.

The recent military build up on the Russian side of the border is in response to Ukraine's threats against the Donbas rebels and NOT as a precursor to a full scale invasion. However Russia's military presence along the border established clear red lines regarding what would trigger an intervention, and sent the message that further Western sanctions would merely intensify Russia’s economic decoupling from Europe. As this I have commented many times in the past eight years and as recently as yesterday, economic sanctions against Russia tend to hit America's European allies harder than their intended target. This is particularly true now because due to EU led loonytoons green energy policies some economically significant north European nations are dependent of Russian gas for the electricity that powers their economies. If Putin wants to break NATO all the has to do is shut down the pipeline.

So the result of this latest exercise in NATO expansionism as the likely consequences of Russia's cutting off the oil and gas? Germany, the nation that would suffer most and also the EU's most powerful economy has broken ranks and is challenging the US assumption that America pulls NATO's strings. The UK has recommissioned several coal fired power plants, throwing the United Nation's green energy policy out of the window. Western states are reconsidering pan-European security and finally acknowledging that Russia has legitimate security interests. For 30 years Russia has sought rapproachment with the west, Yeltsin, Putin and Medvedev have all suggested Russia could join NATO but the American deep state's need for an enemy has blocked any serious discussion. Putin even suggested an EU - Russian Federation union in 2010, so the Russian aggression narrative has always been hollow.

Meetings between representatives of Ukraine and Russia have negotiated terms for a compromise over Donbas without American or EU intervention. One of the things they agreed is that NATO membership for Ukraine is no longer on the agenda. Think tanks on both sides of the Atlantic are discussing if NATO has already expanded beyond its practical limits, the A stands for Atlantic yet recent proposed additions to the organisation include Ukraine, Georgia, Turkey and Kazakhstan, none of which is anywhere near the Atlantic ocean. The possibility of a neutral status for Ukraine, similar to the model  of  Sweden, Finland or Austria is also being considered. The French president even suggested that we need a new approach to pan-European security and observed what should have been obvious: Europe cannot have security if Russia is denied security.

The USA will struggle to spin Moscow’s withdrawal after promoting a narrative of Russian expansionism for the past eight years. Joe Biden's idiotic but widely publicised speech on  “invasion day” reveals the absurdity of the Washington narrative maintained under the presidencies of Obama, Trump and Biden that Russia is pursuing territorial conquest or attempting to restore the Soviet Union. Even the Europeans appear to be exhausted by Washington’s confrontational approach and war hysteria. The simple fact is that id Vladimir Putin had wanted to attack Urkaine he would have done so long ago, probably soon after the 2014 revolution which deposed a democratically elected, pro - Moscow government.

The US will claim that a Russian aggression against Ukraine has been prevented because NATO maintained solidarity against the Russian threat. In reality, the collapse of alliance solidarity gave peace a chance. As long as the bloc is an instrument for collective hegemony in the pan-European space, the obsession with alliance solidarity functions as a rallying cry for uncompromising power politics.

Subsequently, NATO’s “alliance solidarity” has been a disaster for pan-European security. The bloc’s expansionism violated all the major pan-European security agreements by ignoring the principle of “indivisible security,” and stationing permanent combat troops in new member states violated the NATO-Russia Founding Act of 1997. When the US unilaterally withdrew from the AMB-Treaty in 2002, the INF Agreement in 2019, and the Open Skies Agreement in 2020 – the demand for alliance solidarity meant that the Europeans either muted their apprehensions or even blamed Russia for the subsequent collapse of pan-European security agreements.

Putin Could Win World War 3 Without Firing A Shot
This post war originally published in 2015, the names of western leaders have changed, little else hasLeaders of the USA and EU continue on their lunatic course of provoking confrontation with Russia, forgetting Russia's most powerful ally is China and with Iran onside and India, Brazil, Pakistan, most African nations and the oil producers of the middle east not having many reasons to love the west, it looks as if Obama, Cameron and Co. may have misread the situation ...

In Real Life The People Who Wear White Hats Are Not Always The Good Guys
We have been blogging for four years about the US drive for war, provocation of Russia in Syria, Iraq, Ukraine and elsewhere made it obvious. But I'm just a news junkie with a strong sense of curiosity and have wondered why the US seems set on this course. Good to see experts like Stephen Cohen, a prominent expert on, Russia are coming onside."

The Russian Are Coming
Mainstream media's hyping of the threat to Ukrained posed by Russian aggression is the latest in a long line of attempts to lay blame for western foreign policy disasters at the feet of Russia. In fact had Joe Biden not started to babble about Russian aggression, talking up the threat of conflict, there would be no crisis ...

Is Ukraine The Latest New World Order Target For Failed Statehood?There are many civil conflicts going on around the world, the on generating most media coverage being Syria. All of them, including Iraq, which has slid into a state of near civil war after the american troops were prematurely withdrawn as an election sop to American voters by warmonger President Barack Hussein Obama, are the result of meddling by the western powers. Now Ukraine looks set to go the same way for the same reason.