The Pope Wants You to Pray for a One World Religion 'You will all obey the world religion' - Pope Francis (Image source)
The Marxist, globalist, Soros apparatchik currently posing as head of the Catholic faith wants to scrap the Catholic Church. He didn't say that in so many words but he has called on Catholics to pray for the creation of a world religion (because love and peace) which would embrace Catholicism, the Protestant denominations, Orthodox, Syriac, Armenian, Ethiopian and Coptic Christians, Christian Scientists, Rosicrucians, Theosophists, Freemasons, Jehovah's Witnesses, Seventh Day Adventists, Amish, Latter Day Saints, and presumably Muslims, Hindus, Buddhists, Jain, Sikh, Shinto, Pagans, Shamanistic Animists, Jedi, Wiccans and Satanists. In other words they guy's a deluded fuckwit.

from Truthstream Media:
The Hegelian dialectic has been defined as “the framework for guiding our thoughts and actions into conflicts that lead us to a predetermined solution”. What we’re seeing now is the thesis + antithesis = synthesis of a centuries-long plot unfold before our eyes — politically, economically, and religiously.

The Pope (or the guy with the pope robe and silly hat everyone is calling the Pope, whichever you prefer) is now openly calling for everyone to pray for a one world religion “because love and peace”. It’s the closest we’ll get to a one world religion commercial, complete with swelling emotional music and claims that this is about peace and love and acceptance and love and peace. They sure do always promise a utopia, don’t they? Reminds us of Jeremiah 6:14, when they say “peace, peace,” when there is no peace…

Funny, while he calls for this open discussion about religions coming together, the comments section of the original YouTube video have been closed.

For the rest of the article and a video CLICK HERE The punchline? The video was put together by the Jesuit global prayer network.

This latest move will come as no surprise to those who have dubbed Frankie, "The New World Order's Pope" because of his support for globalist, anything-but-christian ideology, his contempt for Catholic theology, dictatorial attitude towards the College of Cardinals and his determination to trash traditional Catholic values.

It is very doubtful that Pope Frankie is The Antichrist as some are suggesting, he seems to us to be just another shallow, opportunistic, egomaniacal world domination freak pitching for a global totalitarian government in which he probably has been promised a role. 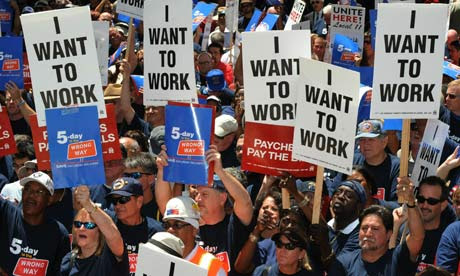 Manipulating statistics is not the same as creating jobs Image source
One of the greatest idiocies uttered by President Barack Hussein Obama in his "State Of The Union" speech earlier this week was the president's claim that his administration had turned the economy around and was creating millions of 'new jobs' every year.

The official narrative from the US Labor Department claims the resurgent economy created 292,000 jobs in December alone. This prompted another round of celebrations from the Obama administration and its supporters and a lot of orgasmic screaming and shouting from people who insist Obama should be judged solely by the colour of his skin, regardless of the 'quality of his character', the paucity of his achievements, the overtly racist tone of his speeches, the numerous foreign policy disasters or the failure to address any of the problems that concern the majority of Americans (clue: gay rights are not a priority for most Americans.

In spite of the US economy having created almost 6 million jobs over the last two years according to official figures, more Americans than ever (93 million according to estimates) are out of work. The unemployment rate has fallen much more rapidly than most economists expected, and at 5 percent, is relatively low by historical standards but the published statistics do not define how many of those jobs are part time, how many are bar staff and waiters and how many are zero hours contracts (casual work with a condition that the contracted person cannot take other casual jobs.

While brainwashed Democrats celebrate Obama's huff and puff about the improving economy, most people in the USA still don't have much reason to be happy (don't worry US readers, things are no better in Europe). Real earning are only slightly above pre-2008 levels, and have only risen by around 7 percent in the past fifteen years, while prices have risen more quickly, even according to official inflation figures . Even small gains in real earning recorded by reliable (i.e. non government economic surveys that workers have seen recently result mainly from the collapse in oil prices on world markets. When prices rise, as geopolitical developments suggest they will, those gains will quickly be reversed

Even if we accept official figures as correct, as unemployment has fallen there has been no rise in the rate of nominal wage growth. In fact data actually indicate the rate of growth slowing slightly. Workers are not getting their share of the new prosperity and are certainly recovering back what they lost in the crash.

Other statistics are consistent with a weak labor market. Turnover rates remain low, close to recession levels, suggesting that few workers are confident enough enough to leave a job without another lined up. Also, the typical length of unemployment periods is similar to what we would expect in a recession, as does the number of people working part-time involuntarily.

The disconnect between the low unemployment rate and other measures of labor market strength is explained by the large number of people who have dropped out of the labor market over the last five years. Workers are only counted in the data as being unemployed if they have looked for work in the last month.

"Workers are only counted in the data as being unemployed if they have looked for work in the last month," says the US Labour Dept. in its T&Cs (nobody reads the small print.) Workers are considered employed if they have one hour of work per month, and conversely if they send out resumes from Monster they are considered unemployed. So, the distortions are large and official numbers mean little. Go with your gut feeling on this one.

Many workers have given up looking for work after being unable to find jobs and are no longer counted as being unemployed, instead they are classified as 'not economically active. This causes the unemployment rate to hugely undercount the number of people who would actually like jobs.

Read articles John Williams at Shadowstats.com or go read Paul Craig Roberts to see informed analysis on how manipulated and massaged these government's numbers are. The numbers we see 'corporate puppet' politicians mouthing on TV screens or read in mainstream media are massaged to the max, and are pure propaganda.

So what are we to make of Barack Obama's claims on unemployment? Some reality needed here. When a full time worker retires of quits, replacing them with two part times is not 'creating two new jobs', nor even one new job in fact. Two half jobs equals one job - i.e. the one formerly done by the guy who quit.
It happens in the UK too, I know a young mother who registered as available for work after maternity leave and was offered a two-hours per day position. It's could not possibly provide a living wage, but as far as government statistics are concerned she is 'in work' and thus off the unemployed statistics.
Anyone who believe government statistics is terminally naive.

Lies, Damned Lies and ummm, those other things
One of the most unfortunate aspects of modern scientific work, apart from the deification of science by people who don't really understand what it is, is the tendency to conflate science with mathematics ... Worse than that, they conflate statistical data with facts and thus trick themselves into believing mathematical models generated by computers are more reliable indicators than empirical evidence.