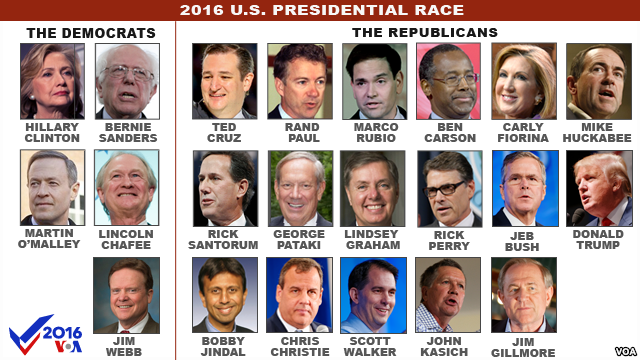 The starting line ups. Quite a lot of Republicans have already dropped out and only two of those left standing look to have a chance (Image source)

Back in 2008, very early in that year's campaign for presidential nominations, I was breaking my self -imposed rule of not taking sides in the political debates of nations other than the UK to warn that the man who had appeared from nowhere, the first term senator whose performance in Congress and the Illinois state legislature before that, had been lacklustre to say the least, would not be HopeyChangeyman, the superhero who would save the world, but a deeply divisive figures whose economic and social policies were doomed and who in foreign policy would be a warmonger whose administration would side with Americas enemies.

Part of that I came to understand by reading and listening to the man's own words, other stud I learned by researching online using techniques only someone with thirty years experience in computer networking should go anywhere near, and that nobody should go near unless they have a proper computer with a proper operating system (I had a DEC microVAX / VMS back then, it runs UNIX for me now. The story of how millions of small individual donations financed Obama's campaign was straight from fairyland. The campaign was bankrolled by some very nasty, neo - con billionaires.

Armed with that knowledge it came as no surprise when Obama's administration was like the Bush Presidency on speed. And of all the negative consequences of governing solely in the interests of corporate pirates, the worst was the deep and festering divisions it caused in U S society.

Those divisions can be seen most clearly in the campaigns of contenders in this year's election cycle.

For the Democrats there is, on the left a socialist, selling a political philosophy that has previously been anathema to American voters, yet generating the most enthusiasm of any of the other candidates including the anointed one, favourite of party elders and mainstream media, Hillary Clinton. Among many Democrats today, Hillary Clinton is simply “not liberal enough” and no longer represents their values. For many others her honesty issues are a problem, while still others worry about her rack record as Secretary of State, the only 'proper' job she ever has, and that by virtue of the fact that her husband is a former president.

On the other end of the spectrum, Republican voters are gravitating, nay stampeding, toward Donald Trump. The only serious rival to Trump is Ted Cruz although it is early days yet and we can expect a compromise candidate to emerge, some party hack whose only virtue is that he / she has never offended anyone who matters (the King Of Saudi Arabia for example). Both of the leading Republican candidates represent a complete break from how party establishment has embraced the politically correct consensus in recent years.

On mainstream news and commentary broadcast and internet forums we see the voters are bitterly divided too. It appears there is just thing that Americans can agree on these days. Almost everybody, right or left, hates the government. CBS News has released an article titled "Americans hate the U.S. government more than ever", and a meta - analysis of recent surveys carried out by Real Clear Politics found that 63 percent of all Americans believe the country is heading in the wrong direction and only 28 percent of all Americans believe that the country is heading in the right direction. In just a few days the first actual votes of the 2016 election will be cast in Iowa, and polls suggest the big story of this cycle, the rise of "outsider" candidates initially written off as eccentrics who hadn't a snowball in hell's chance. Donald Trump and Bernie Sanders are beneficiaries of widespread disgust that the American people feel regarding what has been going on in Washington, for the warmongering of a man who claimed as president he would be the peacemaker and joybringer.

Others are disgusted at Obama's authoritarianism and contempt for democracy and the U S constitution.

And it isn’t just Barack Obama or members of Congress that Americans are disgusted with. According to the CBS News article that referenced above, dissatisfaction with various federal agencies has fallen to an eight year low…

So if everybody is so fed up with the way that things are running, it should be easy to fix right?

Unfortunately, things are not so simple. Thanks to the hippy influence thinking of 'progressive liberals' on one side and the Biblical literalism of evangelical Christians, black Christians and Hispanic Catholics on the other there is no longer a single shared set of values or principles that unites the nation, and therefore it is going to be nearly impossible to bring it together together on specific issues let alone an all embracing program of reform.

In fact, people who talk of 'shared values' in an age of moral relativism are likely to be dismissed as a radical right-wing wacko nut - jobs who believe God created the universe quite recently, and therefore who should be locked up for the safety of those who shout about diversity of skin colour but fear and loathe diversity of ideas.

America today is a nation more divided than ever with the fault lines in society being race, finance, employment, and education as well as religion and politics. If you ask 100 different people what is needed to fix the country, you are likely to get 200 different answers.

And should Bernie sanders, Donald Trump or somebody not currently in the race become president, I can't see how things can be improved to any great extent.

Republican Party Hierachy Meltdown Over Trump?
Whatever it may or may not have achieved, the obviously management - approved intervention of 'Captain Underpants' Mitt Romney who urged Republicans to unite against Donald Trump did not go down well with some parts of the US Media. Here's an extract of somebody called Judge Jeanine, letting rip at the Party's ruling cabal for simply not getting it.

Is Bernie Sanders Pulling Clear Of Democrats 'Anointed One' Hillary?
Offering further proof that it’s “Sanders’ moment,” Bernie Sanders makes enormous gains and poses a real threat to Hillary Clinton’s once-wide lead among Democrats, according to two polls released Friday.Fox News‘ latest national poll finds that more Democratic primary voters now back Sanders at 47 percent, up from 37 percent in January. Clinton’s support, on the other hand, is at 44 percent

In Parallel With The Upheaval In European Politics, A Similar Cataclysm Is Happening In The USA
Having reported for three or four years now the rise of the anti - Integration parties in European Union member nations, UKIP in Britain, the FN in France, AfD in Germany, Denmakr's Peoiple's Party, Five Star and the Liga Nord in Italy, the Sweden Democrats and others in every E U member state, we now look at what is going on in the USA as campaiging for the presidential election gathers pace.

New Hampshire Primary:Sanders and Trump Victory For Vox Populi
Today in New Hampshire where both US political parties have a proper ‘primary’ election as opposed to a caucus a system that apparently chooses candidates by tossing coins, drawing lots, cutting cards or maybe in extreme cases, making the candidates have a fight, it was a different ... New Poll Shows Clinton, Sanders Tied As Hillary's Lead Crumbles

A new opinion poll from Quinnnipac University shows Hillary Clinton's lead in the contest to become the Democratic Party Presidential nomineee has almost completely evaporated. From a lead of around thirty points in early December, the numbers are now 44% Clinton, 42% Sanders, which is such a narrow gap the only two contenders left in the race are in a statistical tie.
Could The Unthinkable Happen - Bernie Sanders Looks like Winning Democrat Nomination
World Economic Forum: The controllers Plan Our Future
At Last, A Candidate I Feel I Could Support Were I An American Voter
Lefties Trying To Troll Trump Show They Are Illiterate Morons
Maverick Sanders surpasses Obama, with $33mn from individual donors
Loud Trump Resonates Throughout America.
Latest Posts we read