Seattle BLM protesters demand white people ‘give up’ their homes 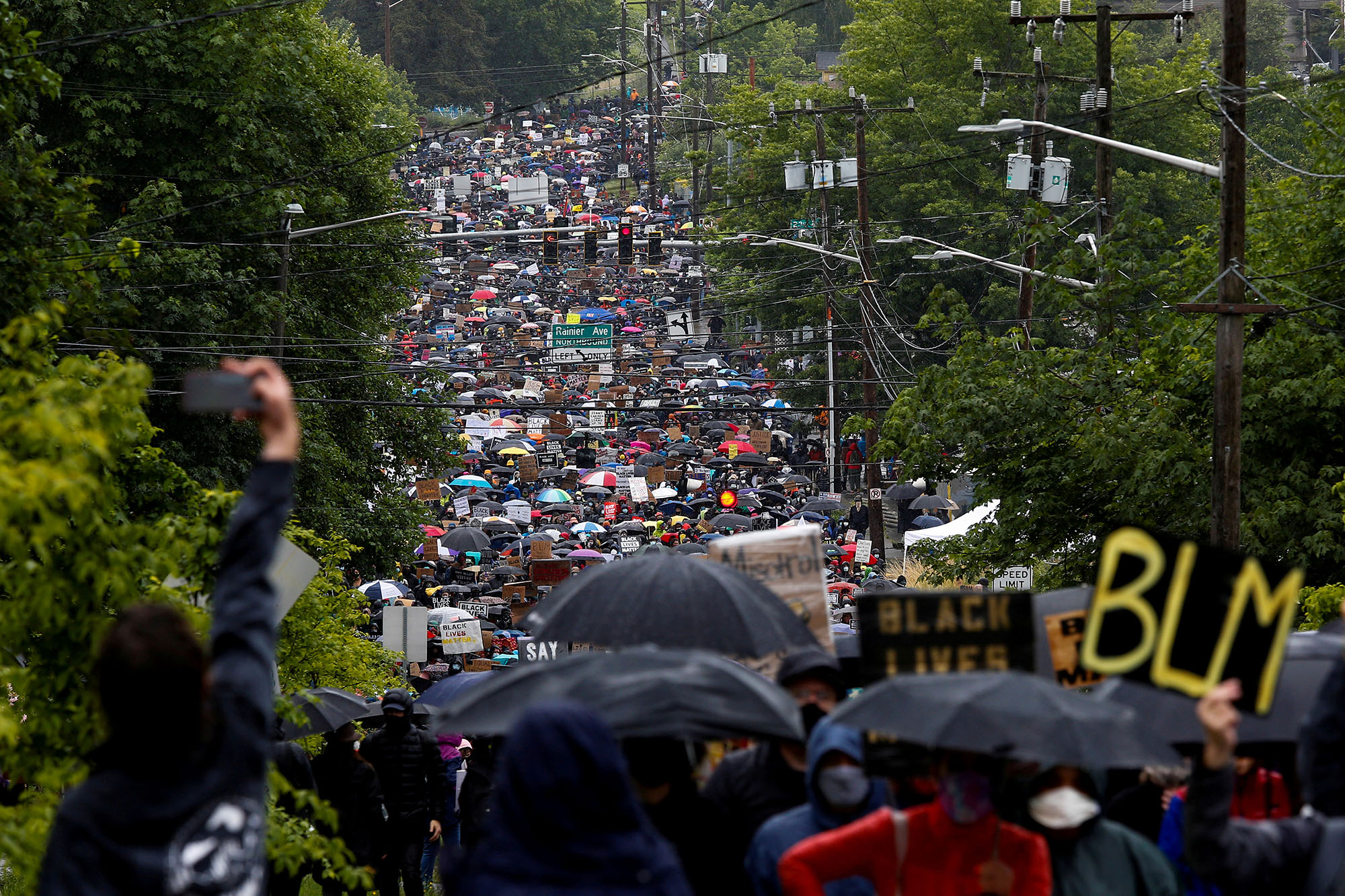 Picture - New York Post / Reuters
Black Lives Matter protesters in Seattle, Washington State, one of the U.S. cities in which civil unrest has continued unabated since the death of George Floyed back in May, marched through a residential suburb this week demanding that white residents give up their homes to be occcuppied by blacks. dramatic video shows.

The video shows a crowd of protestors, including some virtue signalling whites chanting “Black lives matter” before an unidentified man steps up to the lens saying they are living in a historically black section of the city as another woman in the crowd yells that they should “give up” their homes.

“Do you know that before your white ass came here, this was all black people?” the obviously unstable man says. “Do you know people like you came in here and basically bought all the land from the black people for less than what it was worth, kicked them out so you could live here? Do you know that?”

The man continues: “’Cause if you don’t, now you f–king do — now do something about it!”

A woman in the crowd then urges the residents to “open their wallet” as the man continues to yell at the unidentified residents off-camera.

“So how do you plan to fix it?” the man continues. “As a gentrifier, because you are part of that problem.”

A woman with a megaphone then urges the residents to “give up” their house, the footage shows.

These people are obviously suffering a collective mental breakdown, one of the things they claim they are aiming to achieve is the removal of Donald Trump from The White House. Howeveer no sane person could possibly believe their violent, criminal behaviour is doing anything other than helping the Trump campaign win re - election.


MORE ON RACE AND RACIAL PROBLEMS:

EU Parliament Passes Resolution On Ban Of ‘Neo-Fascist’ Groups, Lists Identitarian Movement
The most undemocratic democratically elected body in the world, The European Union Parliament this week passed a resolution demanding that member-states ban ‘neo-fascist’ parties and groups and have intelligence agencies fully co-operate with ‘anti-racism’ NGOs. Ironically the 'anti - racism NGOs they mention are all offshots of globalist, anti - democracy organisations such as Open Society Institute and the Immigrant Defence Project.


Jailed by UK Gov't For Speaking Their Minds
We Stirrers are really starting to worry that Britain and the USA are going in the same direction as the EU nations that signed up to German dominance by joining the single currency. It's as disheartening as it is embarrassing at this point. The establishment is trying to silence dissent and make diversity of opinion a crime. This suppression of individual freedom and our hard won civil rights has come to the point it just feels like something is about to break. They're clearly scared of something.


Diversity" Is a Weapon Against White People
Visit some parts of most British cities with large immigrant populations and you will be hard pressed to recognize it, certainly my granparents would struggle to recognize the towns they knew. Appeasement of foreigners has destroyed the character of our communities but as usual the political left advise solving the problem by doing over again the things that caused it.


‘Why is My Curriculum White?’ Campaign Forces Oxford Uni to Introduce Compulsory Black History Exams
Britain’s oldest and one of its most prestigious universities has come over all Brack Obama and yielded sanity and academic impartialityto politically correct bigotry from a National Union of Students (Special Snowflake branch)campaign with rejoices in the title, ‘Why is my curriculum white? The snowflakes who are mainly white themselves but are too thick to have noticed that, are protesting against the alleged “Eurocentrism” of history teaching.

The most undemocratic democratically elected body in the world, The European Union Parliament this week passed a resolution demanding that member-states ban ‘neo-fascist’ parties and groups and co-operate with ‘anti-racism’ NGOs [...] The motion, which was introduced at the request of Italian MEP Eleonora Forenza, was passed by a vote of 355 MEPs. Many MEPs were not present in the 751-seat chamber for the vote.
Lord’ Sugar Sugar called ‘racist’ for Senegal World Cup team tweet (but it was funny)
Alan Sugar (one of Blair's dodgy 'lords' and front man of the UK version of ‘The Apprentice’ TV show, has come in for a shitstorm of criticism online after tweeting a typical market traders gag about the Senegal World Cup team. Sugar posted a photoshopped image of the Senegal players standing over a row fake designer sunglasses and handbags and gave it the caption “I recognise some of these guys ...”

Ten Truths You Can’t Tell In Britain Without Being Accused Of Racism.

by Arthur Foxake The screenshot below is from an article written by Trevor Phillips, former head of the Equalities and Human Rights commission for The Daily Mail (or Mail On Sunday) Trevor Philips home truths on racism. Image source Finally, we?re having that open and honest debate about immigration and race everyone has been calling … Continue reading

White Girl Is Burned Alive, 17 Black Gang Members Arrested. Mainstream Media Blanks The Story
Remember how the Social Justice Warriors of the politically correct 'left' screamed when a young black man named Trayvon Martin was shot by Hispanic George Zimmerman, because it was assumed someone named Zimmerman would be white? Remember how they wailed and stirred up civil unrest when a black man was shot by white cops in Ferguson, Missouri, automatically assuming the the killing was racially motivated. more >>>
Politician Blasts Conviction For Speaking The Truth On Anti-Semitism In Europe

A Danish politician has been reprimanded for posting comments on Twitter about the resurgence of anti semitism in Europe. Apparently while hand wringing and breast beating about violent attacks on Jewish people is fine, stating the obvious by linking the Europe migrant crisis to this new wave of anti Semitism is a crimin al offence ...
15 More Men of South Asian Descent Charged With Child Sex Offences

West Yorkshire Police have charged 14 men and a 16-year-old boy with sex offences including the rape of a girl under the age of 16 in Keighley, a small town in the old Woollen Industry distict of the county. The offences centre on one female victim, with one allegation involving a second who was also under 16 at the time.
Racist Student Union Officer says 'I Can't be Racist'

We have often made points about the hypocroisy of the left, but a Student Union diversity officer from London beats all comers. Having tweeted 'kill all white men' she justifies herself by saying that as an ethnic minority woman she cannot be racist or bigoted.
Multi-Cultural England: Are You Feeling The Progressive Diversity That's Enriching Your Life
Visit some parts of most British cities with large immigrant populations and you will be hard pressed to recognize it, certainly my granparents would struggle to recognize the towns they knew. Appeasement of foreigners has destroyed the character of our communities but as usual the political left advise solving the problem by doing over again the things that caused it.
US Soldiers Forced To Sit Through P C 'White Privilege Presentation. Not Happy Bunnies
The U.S. Army is investigating an unauthorized diversity training presentation on “white privilege” shown to hundreds of Georgia soldiers, USA Today reported, citing an Army spokeswoman. The Equal Opportunity training presentation was shown to about 400 soldiers of the 67th Signal Battalion at Fort Gordon on Thursday, according to Captain Lindsay Roman.
If a black person acts like a twat is it racist to say he's a twat.

Examples of US rapper Kayne West behaving in ways that show what a cupid stunt he is occur to frequently for mainstream media to report them any more it seems. Or maybe it's just that because Kayne is an African American those mainstream journos were afraid of being called racist if they report his latest fuckwittery.
The British Jihad, Islamism And The Curse Of Multiculturalism.

As the world recoils in horror at images posted on the internet of an American journalist being cruelly and brutally beheaded by an (allegedly) British terrorist fighting for the extremists of the Islamic State in northern Iraq, we ask is the left wing folly of multiculturalism coming home to roost.
Shock; horror. Human Barbie Doll has her own opinions

The human Barbie girl Valeria Lukyanova has become something of an online phenomenon and is regarded as a sex symbol by many young men of the kind who have more computers than friends. Personally I find her apearance bizarre and about as sexually alluring as cold porridge. Still each to there own, where would we be without diversity of opinion.
Immigration - the elephant in the political debating chamber


‘White Racism’
For too long the neo – Fascist left have been allowed to get away with dividing all of humanity into two racial groups, black and white. This has allowed those extremists who support the idea of an authoritarian, global government to dub white people generally as racist, because we have (again generally)been more successful throughout … Continue reading