translated and commented on by fatsally from original story in Der Spiegel: 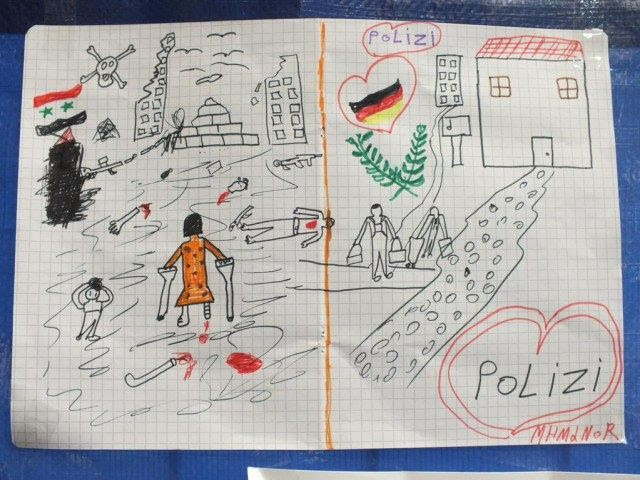 In the past few hours a picture purported to have been drawn and coloued by a Syrian child has prompted a knee jerk reaction from thousands of online handwringers It is a drawing that is supposed to have been given by a refugee child to the Federal Police officers processing refugee applications in the German town Passau.

It shows how brutal life has become in the home country of the child and what is expected from his new life in Germany. Since the Bavarian officials photographed the image and tweeted on Friday morning, it was shared and liked thousands of times in the social networks.

Most users were moved, but some doubted also that the drawing was genuine. "The picture was never painted a child," commented one user on Facebook. The figures were drawn deliberately childlike. "In addition, a child paints no roof in perspective". A Licensees suspected behind it a "propagandistic staging of the police".


While the Politically Correct Though Police at the Washington Post seem to have accepted the official version of events, Der Spiegel, the original source, doesn’t seem convinced, stating: “Whether the girl painted the picture alone or whether she got help from an adult, or whether perhaps only handed over the drawings of another child, is still unclear.

It is typical of those gullible dupes who think they are left wing but are just mawkishly sentimental that they would fall for such an obvious fake. The timing alone, just as the public opinion backlash against Hausfrau Volksfuhrer Merkel's Bilderberg sponsored 'open doors' immigration policy is gathering unstoppable momentum, should be enough to make people suspicious.

As the lawless hoard of migrants imported by Chancellor Merkel in her efforts to suck up to Obama threaten to turn Germany into a third world human cesspit, it seems public opinion in Europe is waking up.

This content is so gobsmackingly evil, all we can say is if we had not spent hours authenticating it, we would not believe it. If after reading and watching this you still think uncontrolled mass immigration from the Muslim nations of Africa and the middle east, you need to see a psychologist.