And of course ordering a 747 to fly him and his wife from Washington to New York for a 'date' then lecturing us ordinary punters on the evils of burning fossil fuel (image source)
Some say Barack hussein Obama is the most evil human being ever. Not being religious I don't go in for evil, Satan, Asmodius and all that, but if we are talking about the most despicably hypocritical human being ever, Brack Obama has to be a contender. The man is so full of shit a torrent of the stuff pours out every time he opens his mouth. Take this shitstream from the warmonger in chief for example:

"America’s world supremacy is not about the number of occupied countries and fired missiles, believes the US president. Its international strength relies on diplomacy, protection of human rights and cooperation with other nations.

"The measure of strength internationally is not simply by how many countries we’re occupying, or how many missiles we’re firing, but the strength of our diplomacy and the strength of our commitment to human rights and our belief that we’ve got to cooperate with other countries together to solve massive problems like terrorism, but also like climate change,” the Washington Examiner cited Barack Obama as saying on Wednesday while addressing a 350-person fundraiser in Potomac, Maryland."

Obama made the statement on the seventh anniversary of his first-term presidential election, answering Republican critics that label his external policy as toothless. The case is of course that Obama has involved the USA in more wars and external conflicts that any other president (even that peace loving Democrat Bill Clinton), that his foreign policy has become a subject of ridicule is due to the incompetence of his administration in managing those interventions.

As recently as February 2015, the president publicly acknowledged that US foreign policy relied on military strength and economic leverage to achieve its aims. He said at that huncture that "American leadership" sometimes involves "twisting the arms” of nations which “don’t do what we need them to do."

"We occasionally have to twist the arms of countries that wouldn’t do what we need them to do if it weren’t for the various economic or diplomatic or, in some cases, military leverage that we exercised — if we didn’t have that dose of realism, we wouldn’t get anything done, either," President Obama said in an interview with Vox.

In May 2015 Obama gave a speech at West Point Military Academy’s graduation ceremony in which he said “America must always lead on the world stage.

"If we don’t, no one else will. The military that you have joined is, and always will be, the backbone of that leadership," Obama said.

He stressed that the US military potential remains at the core of America’s ability to influence changes abroad, therefore the Pentagon reserves the power to launch unilateral attacks when US interests are directly threatened.

So having stated so plainly and recently that Washington foreign policy relies on bullying, why is he backing off from that position now. Maybe it is because, having been exposed by Vladimir Putin over the Syria situation as a leader who lacks the testicular fortitude to back up his threats, Obama is trying to save face by reclaiming his peacemaker and joybringer, Obamessiah image.

Unfortunately that is not going to get him very far with the USA's standing in world politics at an all time low. 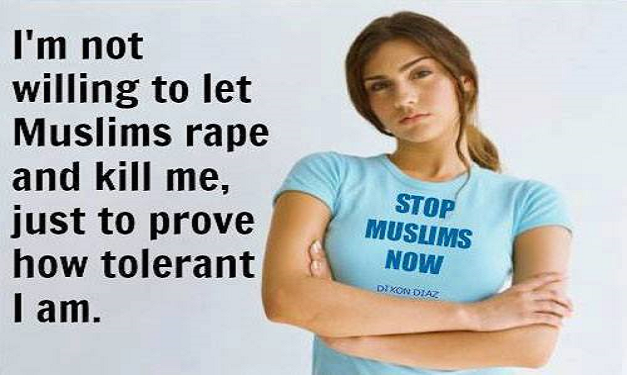 German and Swedish women are waking up to the dangers of uncontrolled immigration and the realities of Islamic attitudes to female freedom (picture source: barenakedislam)
A group of teenager immigrants from north Africa, living in Stockholm as refugees, have been found guilty of the horrific gang rape of a 23-year-old Swedish woman on the Södermalm island, a fashionable residential area in the Stockholm archpelago.

The attack took place two months ago (late August), but was almost unreported by mainstream media, so commonplace have such outrages become in Sweden where the politically correct idiots in government have operated an 'open doors' immigration policy that has earned their country the unenviable title of 'rape capital of Europe.'. Stockholm District Court heard that the woman had been sitting crying when two of the teenage boys came and offered her a beer and comforted her.

From the witness stand she said she had declined the alcohol but ended up sitting with the teenagers at a nearby viewpoint looking over the city. At first the atmosphere was calm and she even phoned a friend. But then one of the men gripped her neck, ripped her clothes off and raped her.

The woman said that several other boys then arrived and she was raped many more times, by at least four different people.

She managed to get away at around 3am and board a night bus in the area, she told the court.

On Thursday the court sentenced two of the thugs, who are all aged between 15 and 18 years old, to six months in a juvenile detention centre and another to nine months. A third boy who was arrested was not brought to trial, Swedish tabloid Aftonbladet reported.

The teenagers are reported to be from north Africa and had been living in a refugee camp in Stockholm.

After the verdict, the rape victim told Aftonbladet she thought it was “sick” that the young men had been given such short sentences but said she was “glad that they were all convicted”.

While her physical wounds have healed, she said: “mentally I feel bloody awful”.

Södermalm is one of Stockholm’s most heavily populated islands, situated south of the city’s Old Town. Previously an industrial area with a reputation for violence, it has transformed into a trendy neighbourhood in recent decades, popular with professionals and business people.

Immigrant criminals and Swedish criminals are viewed differently in the eyes of Swedish law.
We ask why it is, in Sweden, that when a Swede kills two immigrants it is an act of terrorism that shames the nation, but when an African immigrant kills a Swedish mother and her young child, in the eyes of the government it is somehow the victim's fault? The big concern is that, given the desperation of our Conservtive and Labour party leaders to make us more European, such politically correct insanity will be inflicted in Britain next
White genocide in Sweden by order of white government
Sweden: Suicide by immigration
Immmigration omnibus
A young Swedish girl recounts her rape on YouTube
Sweden Rewards murderers and rapists
Latest Posts