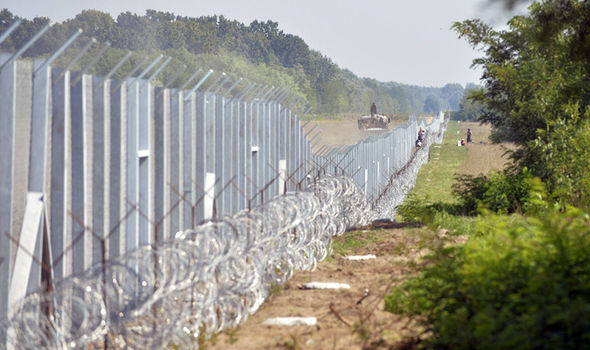 The fence built along Hungary's southern border to stop illegal immigrants entering the country en route from Greece and Turkey top Germany. It is worth noting that international law provides for refugees t seek refuge in the closest safe nation to the one they are fleeing. The moment they start trying to choose a destination they become economic migrants (Image Source)
Europe's problematic 'borderless' Schengen Area looks to be on the brink of total collapse because a furious government in Hungary has launched a rebellion against open borders. The country's prime minister Viktor Orban has totally rejected the mandatory migrant quotas the European Union bureaucracy in Brussels wants to impose on all member states.

Orban is currently touring Europe’s capital cities, rallying support for a new plan for passport free travel with greater protection for individual states, dubbed "Schengen 2.0." It is thought the plan will involve reverting to the original borderless travel plan which enabled citizens of EU nations to move freely between member states but required non EU trsvellers to show passports and where appropriate, visas.

Currently, EU countries are forced to comply with orders from Brussels to offer no obstruction to any cross border by movement within the EU even it is involves travellers who have arrived illegally in EU nations, and to accept and settle a specified number of economic migrants whom the bureaucrats insists are refugees even though they are obviously not fleeing from combat zones. Orban has described these quotas as "wrong-headed" and is now leading a group of other countries determined to re-take control of their borders.

He said during a speech in the Lisbon leg of his trip: "We must protect the borders.The EU cannot create a system in which it lets in migrants and then prescribes mandatory resettlement quotas for every member state."

Orban also promised a referendum in Hungary on whether the country should accept these orders, warning that some of the settled migrants were unlikely to integrate, leading to social friction. He said: "If we do not stop Brussels with a referendum, they will indeed impose on us masses of people, with whom we do not wish to live together."

Other countries may follow suit in opposing these plans and hold their own referendums, taking the power from Brussels and putting it back in the hands of their residents. Only two weks ago in a plebiscite in The Netherlands, Dutch voters threw out a proposal to fast track the accession of Ukraine to full EU mermbership. War torn Ukraine does not mmet any of the democratic, economic or social citeria for EU membership so the attempt by Brussels to recruit the country to the community can only be a calculated provocation to Russia.

The action plan, which will be shared with the Czech Republic, Slovakia and Poland as well as the prime ministers of several other unspecified countries, is just the latest nail in the Schengen coffin. Other countries may follow suit in opposing these plans and hold their own referendums, taking the power from Brussels and putting it back in the hands of their residents.

The stubborn, arrogant stupidity of the unelected bureucrats who run the EU is being very clearly illustrated here. They are trying to usurp the sovereign powers of democratically elected governments on an issue which has caused a massive surge of anti EU sentiment in public opinion thrughout the Union. Their dictatorial attitude can only serve to harden anti EU feelings and swell support for anti EU parties such as France's Front National, UKIP in britain and Germany's Alternatif Fur Deutschland.

European Parliament President Says ‘Vast Majority Of Europeans Do Not Want Borders’
The Europhile German Social Democratic Party (SPD) politician stated that if the populist, anti-mass migration Norbert Hofer becomes president "this will change Europe’s character". Last month Hofer came top in the first round of the Austrian elections, and in two weeks voters will go to the polls for the second round, to choose between the right wing FPO figure and his Green rival Alexander Van der Bellen as the nation’s next head of state.

OK you are thinking, this is the umpteenth example of lying, crookedness, corruption and playing fast and loose with national security that should have (would have) ended the political career of anybody but The New World Order's darling, the anointed one, the compliant drone willing to unquestionably do the bidding of that ruthless cabal of faceless, secretive, super wealthy creatures of dubious humanity who really run the world.

The case is human beings are easily manipulated and a propaganda campaign consisting of a toxic mix of lies and scaremongering has frightened the weak of will, the apologies for human beings who rather than face life as a great adventure instead desire instead to cringe behind the apron of Nanny State.

Such people get what they deserve. The sad thing is the rest of us here in the west, where snivelling cowardice is in the majority it seems, the rest of us do not deserve such a fate. So here again is why only snivelling cowards who are not fit to be called human would want to vote for a repugnant hypocrite like Hillary. Thanks to The AntiMedia for making this article available on a creative commons licence. If you love or respect democracy and individual freedom please share it and the embedded video as widely as possible.

Evidence of said rigging isn’t difficult to find — it’s written directly into the electoral process in superdelegates, whose 700 “unpledged” votes remain uncommitted to a candidate until the nomination. This is “to ensure nominees are hand-picked party insiders,” as Martin explains in the video.

“The single vote of a superdelegate is worth thousands of ours,” Martin notes. “Many of these people are current and former members of Congress, and dozens more are literally corporate lobbyists working on behalf of every industry from healthcare to private prisons.”

In fact, the employment of superdelegates was initiated precisely for situations when the people’s choice doesn’t align with the establishment’s — such as the current overwhelming popularity of Bernie Sanders.

But the web of corporate media executives and insiders contributing directly to Hillary Clinton’s campaign couldn’t possibly explain the extreme bias, lack of criticism, and virtual media blackout on Sanders’ success, right? And her campaign, dripping with corporate lobbying cash, wouldn’t concern the American voting public, even though lobbyists literally act as superdelegates — would it?

This article (The Video That Could Bring Down Hillary Clinton’s Campaign) is free and open source. You have permission to republish this article under a Creative Commons license with attribution to Claire Bernish and theAntiMedia.org. Anti-Media Radio airs weeknights at 11pm Eastern/8pm Pacific. Image credit: Gage Skidmore. If you spot a typo, email edits@theantimedia.org.

RELATED POSTS:
Bernie Earns less In A Year Than Hillary Gets For One Speech To Bankers
Low And Middle Income Whites and Blacks Feel Threatened As Crime Soars Under Obama
Why Won’t The Panama Papers Lefty Leakers Expose EU or American Establishment Figures?
The Panama Papers and the real news this story is hiding.
'I Pray for Sanders' - Oliver Stone Condemns Clinton’s ‘Corrupt’ Policy
The Hope That Springs Eternal?
With Hillary Clinton’s Email Lies Unravelling, 147 FBI Agents Are On Her Heels
Servergate: Hillary Clinton, Arrogant, Ignorant or both?
Why Should Obama Be Given A Platform From Which To Lecture Britian
Undemocratic Democrats – Nearly 10% Of Democratic Party Superdelegates Are Corporate Lobbyists