The Asia-Pacific region is in danger of being destabilised by the growing rivalry between China and the United States as we reported yesterday.

At the opening ceremony of the China-US Strategic and Economic Dialogue in Beijing, Chinese President Xi Jinping said that as long as both the parties resolve differences on the basis of mutual respect and equality, relations between China and the United States can avoid serious complications. It was a typically Chiese veiled warning to the US to stop provoking China.

The president pointed out that major powers having some differences with each other is normal, but at the Asian security summit taking place concurrently in Singapore, US Defense Minister, Ashton Carter, accused China of “expansive and unprecedented action” in the South China Sea.

According to Carter, China’s steps to create artificial areas in some parts of the South China Sea threaten security in the Asia-Pacific region. While US Secretary of Defense acknowledged that other states also engage in such action, however, according to Carter, “Beijing is destabilizing the situation.”

The interaction of two factors, “competition” and “cooperation” in relations between Beijing and Washington is increasing tensions throughout the region.

Sino-US relations are subject to rapidly changing and difficult to predict dynamics of international relations in the region as a whole. The United States is clearly trying to manipulate the situation in the South China Sea region to contain China by strengthening old ties and trying to create new military alliances (and recolonising Philippines according to some regional pundits.)

US attempts to shift regional burden on its allies can only achieve limited results. In terms of military capacity the abilities of Japan, Thailand and other states not allied to Beijing are weak. South Korea spends more on the policy of maneuvering between US and China than it does on defence.

A containment policy to neutralise the threat from China in the foreseeable future will become more of a burden for the United States, given that the Americans have not managed to reduce their involvement in regional security in other regions of the world. In the meantime China, Russia and Iran are operating an economic strategy that is undermining the status of the US dollar as global reserve currency.

In the next few years, the US may be faced with having to make a difficult choice; deciding on whether their presence in the middle east or south east Asia is more advantageous to them.

RELATED POSTS:
US Warned It Is Playing With Fire by Repeatedly Provoking China in S China Sea
The True State Of The US Economy: Retail Companies Reporting Sales Targets Missed
Baltic Dry Index Crashes. The Global Economy Is Coming To A Standstill
America Today: How Empires Die
China and Russia Challenge US Dominated IMF
Why It Really All Comes Down To The Death Of The Petrodollar
China Stumps Up To Help Beleagured Russian Economy
Propaganda War: US Officials Working to Keep Russia, Europe at Odds
Ruling Elites In Panic: Trump Presidency Would End Their Golbal Government Dream
Chinese Lunar Rover Finds No Evidence of American Moon Landings
As Russia, China and Iran line up behind Assad, has the USA (and its proxies) lost the middle east war?

Turkey Resorts To Blackmail (Again), Will Unleash Refugees On Europe If No Visa-Free Travel

After the frentic reporting of events in Syria throughout the early party of the year,  May was relatively quite news wise for us on the middle east.  It was, however, a month that marked new lows in recent EU / Turkey relations.

Following months of appeasement as EU bureaucrats and politicians led by Angela Merkel sucked up to Erdogan, offering money and political favours in return for help in controlling the migrant flow into the EU, which concluded with Merkel offering a deal on behalf of all EU states which she was completely unauthorised to make, under which Turkey would hold Syrian refugees within its borders instead of allowing them to continue onward to Central Europe, in return for cash and fast trcked acession to full EU mermbership, with instant visa free travel within Europe for Turkish citizens as a sweetener. Things promptly fell apart when several EU member states governments pledged to veto any such deal. 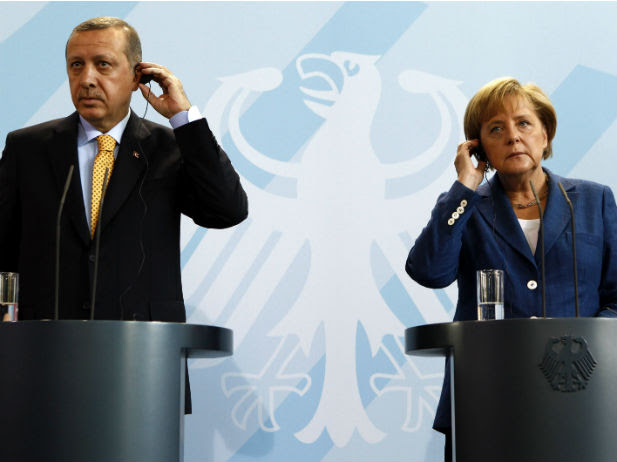 Erdogan and Merkel: No longer on the same wavelength? (picture source: ukrturk.net)
As the best laid plans of Merkel and Erdogan went 'a - gely', less than a month ago a high-ranking deputy for Turkey’s ruling AKP party, Burhan Kuzu and former special adviser to President Erdogan made an explicit threat to Europe which was at that time discussing whether or not to grant Turkey visa-free travel within the continent in spite of the fact that despite several cash payments, promised help from Turkey had not been forthcoming. Specifically, he tweeted, "The European Parliament will discuss the report that will open Europe visa-free for Turkish citizens. If the wrong decision is taken, we will unleash  the refugees!." Where I come from that is called blackmail.

Fast forward two weeks and  we learn that the EU plan to extend visa-free travel privileges to Turkey as of July 1 would be delayed over worries Ankara won't meet the key conditions relating to human rights on time. Erdogan is reported to have said the EU cannot tell Turkey how to run its affairs. Or as The Godfather might have put it, "I'm going to take a leak, by the time I get back your signature or your brains will be on that document."

As Deutsche Welle reported "Chancellor Angela Merkel is in no mood to budge" in what is the first actual indication of resistance by the German to the increasingly more outrageous demands by the Turkey's gangster president.

Erdogan's response was to escalate the threat level:

"The current system falls short... the burden is shouldered only by certain countries, everyone should assume responsibility from now on," he said, making it clear he believes Turkey can tell EU member states how to run their affairs.

"Needs increase every day but resources do not increase at the same pace. There are tendencies to avoid responsibility among the international community," he added. Turkey claims it has spent $10 billion on hosting Syrian refugees, compared to $450 million from the rest of the international community. We should bear in mind perhaps that $10 billion is only a fraction of what Turkey has made from illegally trading oil stolen by ISIS.

The implication was straightforward: send even more money over and above the $3 billion handed previously.

Today, things really hotted up, when Turkey's Foreign Minister Mevlut Cavusoglu told state broadcaster TRT Haber on Tuesday that Turkey would have to suspend its agreement with the European Union to stem the flow of migrants into the bloc if there is no deal to grant visa-free travel to Turks.
In other words, no visa-free travel - something both German and the EU are against as of this moment due to concerns it would permit terrorist to slip through Schengen's border - would mean Turkey floods Europe with hundreds of thousands of more refugees.The simple answer to that would be to disband the Schengen zone and for the EU's stronger states help the weaker nations of southern Europe to police their borders and deport illegal arrivals.