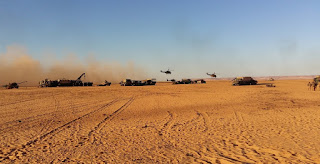 France has already deployed hundreds of elite troops with sophisticated hardware to check the advance of ISIS fighters into Niger and Chad (picture: Blogger)


A couple of days ago I stumbled across one of the most idiotically self righteous posts I have ever seen. A 'liberal blogger' had written a vicious attack on Americas who support Donald Trump combined with a hymn of praise to Islam as the self styled 'religion of peace'.

The author (I'm not going to give him a link, he does not deserve it) is, like myself, British. Now apart from the fact that British bloggers should not get involved in American election politics because we don't see a true picture of the candidates and don't have a vote in US elections, (and for the record I wouldn't vote for Trump, Hillary Clinton, Bernie Sanders, Ted Cruz or Marco Rubio even if I could,) not only was the writer of the article wrong and uninformed in calling Trump supporters ignorant and fascist, his praise of Islam as the 'religion of peace' rested on an entirely false and anachronistic premise.

He cited in support of his argument the medieval principal that when a traveller turned up at your door seeking shelter, an honourable person would treat the visitor as an honoured guest rather than a supplicant. Where he was wrong lay in his describing this as something exclusive to Islam.

In fact, when the world was only sparsely populated, the virtue of hospitality was common to all early civilisations, the Greeks, European Pagans, the Zoroastrians of Assyria and Persia, Hindus in India, the Celtic and Gothic cultures, throughout north Africa and Asia, the whole of the known world in fact, and for several thousand years before Mohammed created the Muslim religion. So in fact his claim that only the Islamic faith could create such generosity of spirit was wholly false.

Now let's look at a new aspect of the threat to civilised values emanating from 'The Religion Of Peace'.

Although there has traditionally been deadly rivalry among the various jihadist groups operating in North Africa (mostly in the deserts of Libya since the Obama - led humanitarian bombing campaign turned that once prosperous country into a failed state) , new alliances being formed among the different flavours of radical Islam have resulted in collaboration, better organisation and a more coordinated approach to public relations and propaganda. These developments surely carry a warning of more trouble for European and American nations with large Muslim immigrant communities and 'open doors' border control policies. Politicians babble about the war on terror, it's time they realised it is a serious problem, not just a convenient topic for campaign speeches.

According to reports like this one in The New York Times, the growing unity among jihadist factions has led to increased sharing of communications technology and a "sophisticated system of roving trainers to share military tactics, media strategies and ways of transferring money without attracting the attention of the US - UK internet surveillance system."

As long ago as March 2015, Nigerian terrorist group Boko Haram took up the the Islamic State (ISIS/ISIL) banner, adopting the name, “Islamic State West Africa Province,” or ISWAP. The title change is more than semantic, it links the radical Islamist forces in Africa and the Middle East.

In October, Nigerian news site Today reported, Boko Haram reached out to the Somali jihadist organization al-Shabaab,urging it to follow suit and switch its loyalty from al-Qaeda to the Islamic State, which part of the group eventually did.

Earlier in the year, ISIS approached al-Shabaab, encouraging leaders of the group to launch attacks “inside Kenya, Tanzania, and Ethiopia.”

Al-Qaeda has been active in Libya since the 1990s, but has not opposed the arrival of Islamic State in the region.

In mid-December, 2015, the government of Saudi Arabia, along with the USA a major sponsor of ISIS, took a break from recreational beheading tournaments to announce the creation of a coalition of 34 countries to wage war against terrorism, with Morocco emerging as regional leader.

Saudi Arabia’s execution of a prominent Shiite cleric and 46 other men on Saturday January 2, in the name of a crackdown on Islamist terrorism, has been criticized as needlessly provocative. This blog has always maintained that as far as the Obama Administration in Washington and their main middle eastern ally, the Royal House of Saud in Riyhad are concerned, Sunni Muslims can do no wrong while Shia' Alawite, Yazidi and Ahmadiyyas are heretics and terrorists. Given the bloody and brutal conflicts between these sects and their various offshoots, anyone who claims impartial objectivity and then describes 'Islam' as a whole as The Religion Of Peace is not just ill informed, he is uninformed and worse, is not prepared to consider any argument that challenges his prejudices.

Another Humanitarian Crisis Looms In Africa

USA Extends Drone war To Africa
So why we wonder is the USA taking its drone war against the third world into deepest, sub Sahran Africa? There cannot be any reason for it, the cited aim of neutralising Boko Haram is not valid because boko Haram are not a standing army but a guerilla force that strikes and then melts away into the civilian population.

The War On Terror Freedom Is Not Winning
Captured ISIS fighter says ‘trained in Turkey, ISIS thinks it’s safer than Syria’
Nigerian President Lies: We Have 'Won the War’ Against Boko Haram.
In The War On Terror Freedom Is Not Winning - Here You Might Learn Why
Tacit Approval From US Liberals For Islamic Indoctrination In US Schools.
Convert Or Be Beheaded’ – Chilling Message Posted Through Doors Across Sweden
Turkish Convoy Allegedly Carrying Weapons To ISIS Bombed In Syria
War On Terror
Sweden Dystopia Omnibus
Immigration Omnibus
Immigration Germany
War On Terror omnibus
Greenteeth Media Catalogue on Terror