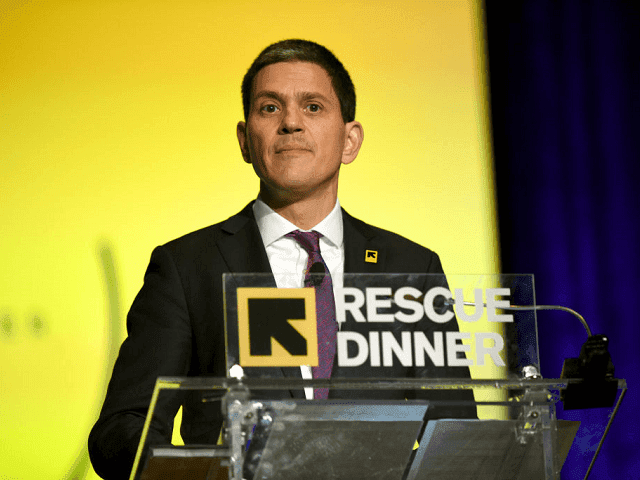 
Britain should have another Brexit referendum before the nation completes the already considerably delayed process of leaving the European Union, and to do any less would be the death of democracy, says former Labour leadership loser David Miliband, who since being rejected by his party in favour of brother Ed has worked for the profoundly undemocratic International Rescue charity which has been instumental in engineering the current flood of legal immigrants entering Europe.

After throwing a hissy fit and flounching out of British politics to become president of the Soros funded International Rescue Committee migration charity, Miliband slammed Brexit, calling it a "humiliation", while speaking to The Sunday Times.

Making clear he not only thought Britain leaving the EU is a mistake, but that the negotiating process was being badly handled by remain-supporting Theresa May, Miliband — the son of a Marxist academic and author — said the prime minister had "bent over so far backwards to prove she’s no longer a Remainer that she’s ended up looking ridiculous".

Referring to Brexit, Miliband called it "the biggest threat to the unity and prosperity of the UK since the Second World War", "the humiliation of Britain", and said he wanted to see a second referendum because "democracy cannot be allowed to die on June 23 2016".

In view of that we should heave a collective sigh of relief that Labour party members did throw the blairite Miliband out. He clearly does not understand how democracy works and shares the view of EU leaders that in a democratic referendum if voters return the wrong result they must be made to vote again.

Britain, most people will recall, voted 52-48 to leave the EU, but a number of pro-remain voices including several leading Conservatives and former Labour Prime Minister Tony Blair have called for another referendum, giving the British people a second chance to stick with the Euronazis in Brussels.

Miliband, who compared himself to his friend, failed Democrat presidential nominee Hillary Clinton as someone who is "probably better at government than at politics", (on the available evidence we conclude that both as equally as shite at government as they are at politics,) continues to work hard to enable and encourage more mass migration and the dismantling by stealth of border controls which makes it easy for terrorists, extremists, murderers and rapists from the third world to enter civilised nations. Despite his admission of having been part of a government that let too many people into Britain, in January Miliband was among the first to criticise President Trump’s immigration policies, and slammed the U.S. for vetting potential refugees.

In 2016, when the Marxist billionaire George Soros announced he was to give $500 million to migrants and refugees, he named Office of the United Nations High Commissioner for Refugees and the International Rescue Committee, of which Mr. Miliband is president, as close allies who would help him to guide his investment.

Miliband is an enemy of Britain and of European civilisation. His support for Blair's demand that we rerun the Brexit referendum only strengthens the case for us to leave immediately, with out any deal the corrupt and undemocratic EU might try to impose. Only our enemies, those who would destroy our culture and hand sovereignty of our nation to a bureaucratic dictatorship want to keep us in the EU.

As UK National Socialist Leader Jeremy Corbyn Corbyn makes 'socialist case' for EU ...
As Jeremy Corbyn goes over to the dark side and tries to pretend the EU is a democratic, socialist organisation, George Soros reveals his plan to marginalise educated Europeans by flooding europe with ignorant, illiterate third world migrants to provide cheap and easily controlled Labour for industry

According to Hungarian Prime Minister Viktor Orban, The Open Society Foundation network, a pseudo – charity founded by American-Hungarian billionaire Marxist, George Soros has, through patronage and generous hospitality to those who might be useful in advancing the hedge fund operator’s global government agenda, amassed vast influence over European Union bureaucratic institutions in Brussels, including … END_OF_DOCUMENT_TOKEN_TO_BE_REPLACED


Starting Pistol Fired In Race To Succeed Merkel
While the odds of Merkel being deposed by a putsch in her own party may seem slim, they have been improved vastly by her party’s monumental failure in German state elections on Sunday, with her migration policy as the rationale for huge numbers of voters abandoning the CDU for the anti - integration, anti - immigration AfD party.

Hungarian lawmakers from Prime Minister Viktor Orban’s Fidesz party approved a law that could force a university founded by financier George Soros out of the country despite a protest against the plan in Budapest and condemnation abroad. The legislation passed with 123 votes in favor and 38 against, while 38 deputies did not vote. Voting … END_OF_DOCUMENT_TOKEN_TO_BE_REPLACED

Hungarian Government Minister Slams Down German Call To Show 'Humanity' To Illegals
A senior member of the Hungarian government accused a German Foreign Affairs
minister of having lost his grip on reality after the German insisted that in order to stop further atrocities like the one in Paris, more open borders and less restrictions on movement were needed.German Federal Foreign Office minister of state Michael Roth yesterday insisted the Paris attacks showed Europe should move to integrate more fully ...

Muslim Only No Go Areas For Police And Emergency Services In Our Cities? - It Already Happened In Sweden.
Sweden continues to lead the way in surrendering its nation, culture and self respect to exTremist Muslim dickheads, reasoning that the violent rapists and murderers of the relion of peace will thank them rather than kill them all. but the people all over Europe are waking to the betrayal of their elites.

Hungary speeds up fence building as criticisms of its 'no more migrants' policy mount
With the criticisms from Austrian and German leaders still echoing through the strEets of Prague, likening their treatment of undocumented travellers who are trying to enter the country illegally to Nazi holocaust deportations, the Hungarians have been rushing to finish their razor-wire fence along ...

Word on the street says The Establishment is setting up Donald Trump. The mainstream media hates him. Hollywood hates him. The “Intellectual Yet Idiot” academic class hates him. Most importantly, the CIA hates him. So does the rest of the Deep State, or the permanently entrenched “national security” bureaucracy. They did everything possible to prevent … END_OF_DOCUMENT_TOKEN_TO_BE_REPLACED

The pool of corruption and scandal surrounding Hillary Clinton keeps spreading. The latest leaked documents reveal her links with George Soros. A set of e-mail messages included in the latest batch of Hillary Clinton documents released by Wikileaks (the September 2015 State Department dump) show that while Secretary of State of the United States, Mrs. … END_OF_DOCUMENT_TOKEN_TO_BE_REPLACED


Mediterranean Immigrant Composite
The flow of undocumented migrants from Africa trying to cross the Mediterranean from the coast of Libya to Italian, Greek and Maltese territory seems unstoppable. Two factors in the problem however have been western (particularly American meddling in the internal affairs of African states, and western aid leading to a population explosion national infrastructures are unable to cope with. And of course European leaders haven't a clue how to deal with the problem.


The West Is Always To Blame For Africa's Troubles
It seems to us that according to the the political left of European and north American nation, we in the west are responsible for all of Africa's racial, economic and it was even the 'evil white man' who instigated tribal wars and genocides that took place before and parts of the continent was colonised. But excusing Africa's endemic problems is a parh to self destruction.

How immigration his European hospitals and schools
Immigration boat people

Champagne Socialists
Posted by Boggart Blogger at 1:09 PM No comments: