Yes you read that right. The fascist regime in the USA has usurped to itself the right to raid bank accounts anywhere is the world. At the moment they are only stealing money by way of tax demands from people who were born on US soil even if those people have not lived in the USA since childhood and have never be employed by a US business.
I have to wonder however, how long it will be before the rent - boy President is sending his racketeers after me, you see one of my Grandfathers was actually born in the USA so no doubt the Obama regime will be wanting me to contribute so he can offer more gifts and benisons to illegal immigrants, perverts, crooks, liars and workshy scroungers. The worst of it is our gutless, spineless, traitorous leaders in Europe are co - operating with Obama's gangster regime:- Phil T Looker. 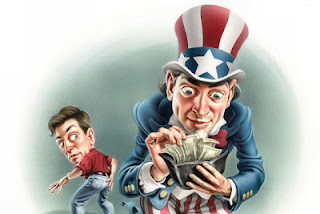 Remember when Obama raved "The Government Owns That?" Well now he thinks he owns the cash in your pocket, even if you don't live or work in the USA

Jonathan Weiss hasn’t lived in the US for 25 years. But that didn’t keep his foreign bank account from being frozen in the wake of new US tax laws. Find out how you can avoid the same fate at the hands of FATCA.
“I had been living in Switzerland for ten years, and then out of the blue I got a letter from my bank, saying that since I am an American citizen I had to file some extra paperwork,” Jonathan Weiss tells The Local. “Two weeks later my bank account was frozen.”
Weiss was born in the US, but has lived abroad since age ten, in both Asia and Europe.
“I was just living in Switzerland, working there, minding my own business,” Weiss recalls. “And then I was caught up this net. I had no idea what to do.”
That was his first encounter with the long arm of US tax law – FATCA.
If you’re an American living abroad, chances are you’ve heard of FATCA. And if you haven’t, you probably should have. Or there may be serious consequences.
“FATCA requires foreign banks to report information to the IRS regarding all financial accounts held by American clients,” Ines Zemelman, a tax agent specializing in expatriate taxes, tells The Local.
“The age of financial privacy is over.”
Over 100 nations have already agreed to provide the IRS with such information, including Germany, France, Spain, Italy, Switzerland, Austria, Sweden, Denmark, and Norway.
Click Here to read full article RELATED POSTS: Swiss Decoupling Sets The Euro Adrift, Triggers Vast Losses For Banks, And Currency Traders
Nobody is shedding any tears over the news that the deciusion by the Swiss central bank to sever the link that kept The Euro single European currency from the Swiss Franc, it is just another example of really important news you will never read of hear of from mainstream media. It is however bad news for all of us.

Google quits Spain in paid content row
]
Spain's government have defied Google's vow to shut down its Spanish online news service rather than pay for content, [ ... ] The internet search giant threatened to close Google News Spain in December, 2014, before an intellectual property law enters force in January obliging Internet news scrapers to pay for content automatically lifted from other websites. Spain's culture ministry, said it would go ahead with the new law, Google's response is "a matter for the company".

‘Bill Gates is now promoting “digital currency” in third-world countries, which will make the poor even more dependent on central banks while also turning them into guinea pigs for the development of a “cashless society” in the U.S. and Europe.

When Algorithms Rule The World

It must seem to many people that technology is taking over the world and our lives. The internet is everywhere and algorithms filter information to control the news and influence behaviour. But is the technology takeover as solid as it seems or are the hyperbolic claims based on some very dodgy logic?

Are privacy campaigners right to be worried about intrustive internet technology and the massive databases that log our behaviour and parse the data for patters that enable us to be targeted for advertising? Should we bee worried by surveillance or are those that raise doubts just scaremongering? The Orwell-huxley-Dick dystopianometer is rising.

Internet Trolls - Are They Contractors Paid To Suppress Open Discussion Of Sensitive Subjects?.

Everyone who likes to follow online debates on sensitive or controversial topics will have encountered trolls. but are these people really just angry and obsessive, excesssively self righteous individuals. Or is there anyting in th claims that they are employed by contractors to suppress open discussion and discredit points of view which do not support government or corporate interests.


Don't be Evil, Google Will Do It For You

Almost every day we hear of a new scheme hatched by insane, sociopathic scientists to dehumanise us and make us slaves to machines. One of the latest is a scheme for using robot censors to control what we see and hear on the internet. If this was just about copyright protection it would be bad enough but wen the technocrats talk of filtering undesireable content, aren't we getting close to ditital fascism?

Google buys Nest for $3.2 billion: Does this home automation acquisition point to ‘the internet of things’?

The Internet Of Things is comong, science and technology geeks tell us. These dysfunctional misfits wose only griends are machines long for the day when we finally surrender our humanity and freedom and become slaves to the machine. but how realistic are their claims, is it mostly just hype?

The Spy In Your Smartphone

An article in OS news opens by saying those of us with experience in digital technology have known about the nasties hidden in your internet enabled computers and gadgets for years.This is absolutely true. Why did people like me not sound the alarm then, you might well ask? In the case of smartphones I confess to ...