The Conscience of Silicon Valley?

By Zach Baron for GQ 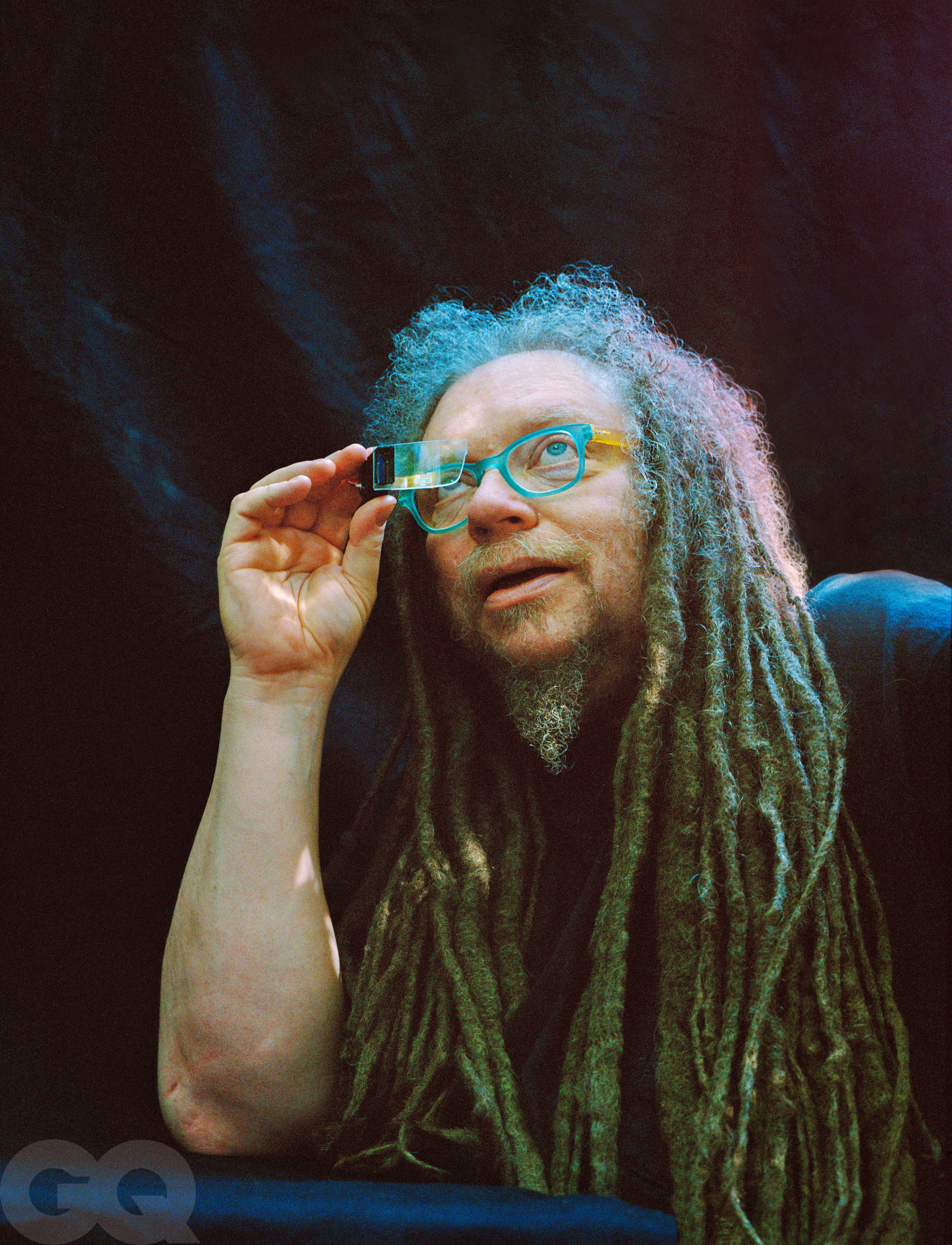 Jaron Lanier, photographed at home with a decades-old lens from an augmented-reality headset.
There Jaron Lanier and I were, side by side on my computer screen, in a virtual space that looked a little like a conference room and a little like a movie theater. We could've been jurors, maybe. I was able to approximate rubbing his head. “As you have discovered,” Lanier said, noticing, “you can reach and interact with people a little bit. So there is this shared-space quality.” He was in Berkeley, California, in the hills above the city, in a house that looks out over the bay. I was in Los Angeles. Five minutes ago we were in our own separate video-chat windows, the ones many of us now see as we're going to sleep, our dumb faces staring back at us. Then he had hit some buttons. Now we were together.
Lanier calls this technology Together mode; he helped design it this spring for Microsoft, where he has a post as an in-house seer of sorts. Initially he'd conceived of Together mode as a way to help Stephen Colbert—in whose house band Lanier sometimes performs when he's in New York—figure out how to host his show in front of a remote audience. (Lanier is sometimes credited as the father of virtual reality; he is also sometimes credited as the owner of the world's largest flute, in addition to the many other exotic instruments he collects and expertly plays.) But mostly he was trying to solve, as he's been doing since the early '80s, a problem relating to technology and how humans might use it. In this case: How could we better, more naturally communicate with one another in the middle of a pandemic?
He explained a bit more about how Together mode worked, how it soothed what the medium had previously tended to aggravate. Being side by side, instead of separated—and being able to make eye contact, as we now could—worked on the psychology; it made you a little more playful, a little more relaxed. It might even help build, in the words of the NBA—which swiftly adopted Together mode as a way to project remote fans onto courtside monitors in otherwise empty Florida arenas—“a sense of community.”

“People who are addicted to Twitter,” Lanier said, “are like all addicts—on the one hand miserable, and on the other hand very defensive about it and unwilling to blame Twitter.”
“What I'm hoping,” Lanier said, gesturing around our virtual space, “is that people find a little bit of well-being in it. Like, we can't pretend it'll do that much, because everything sucks, but it's a little something. It should help a bit.” ... Continue reading >>>

Could 'DNA editing' lead to designer babies?
Designer babies, human / animal hybrids, these things have been in wet dream territory for scientists for a long time. But now due to techniques such as DNA editing, they are getting worryingly close to reality. And as has been demonstrated many times, scientists have zero uderstanding of where the ethical boundaries lie.

Nothing Good Has Come Of The InternetWhen a technophobe denounces the internet as anti - social, anti jobs, a force for dumbing down or a waste of time it can easily be dismissed but when the CEO of a major technology company like Sony saays nothing good has ever come of the internet we should perhaps listen..

Is The Internet Making Us All Stupid.The more gullible and wide eyed among academics like to burble ecstatically about how the internet has ushered in a new age of creativity. We have to wonder just how much time these self styled experts have spent surfing scial networking sites


Computer Cops Will Arrest You Before You Commit A Crime

Innocent until proved guilty has always been a basic principle of British and before the Union, English and Scottish justice. Since late in the ninth century when King Alfred signed into law the Liber Judicialis, the presumption of innocence has stood.Thinking of committing a crime was not punishable, only in George Orwell's dystopian novel "1984" has Thought Crime ever been a punishable offence. Until now ...

We live in a world of deception, where truth is an ephemeral thing, slippery as an eel and shadowy as a spectre. What we are expercted to perceive as reality is just spin and misinformation designed to ensure the elite maintain their control. There's eff all you can do just get on with your life, say the shills for big government and authoritarianism. But are we really nothing more than slaves of the system?

Transhumanism, the creation of - or turning us into - part human, part machine cyborgs is generating a lot of discussion and a lot of spontaneous ejaculations in the scientific community as they contemplate having their brains replaced by a computer. There are no limits on the ambitions of scientists fantasies, they even envisage creating robots that can interbreed with us, but how much is realistic?

Google wants to change the way you see the world

News Used To Be Important - Now It's Just EntertainmentPeople talk about technology, mainly television, cellulat telephones and the internet having given us an unprecedented ability to communicate. But have they? OK, we can trade meaningless messages with strangers on the other side of the world, we can join the cacophony of social netwoks where everybody yells at once and nobody listens, or we can sit in isolation, shouting inmto the void. But none of those are communicating. Technology has actually inhibited communication. ...

Google Evil Empire In New Privacy ViolationOnce again the neo-Nazi nerds at Google are in trouble for playing fast and loose with our privacy. Google have bypassed browser privacy setting to track our movements on the web, the bettrer to target us with ads for poxy shite no sane person would buy. What is it these arseholes find difficult to understand about the idea that in the real world or cyberspace same rules apply ...


Google Has Comptely Forgotten 'Don't Be Evil' As The World Domination Agend Gathers PaceAt last Google has been caught stealing information from a business rival rather than private induviduals. Will people now wise up to these scumsucking pirates of the internet search engine world.

A Chronicle Of Decay

Slaves Of The Machine