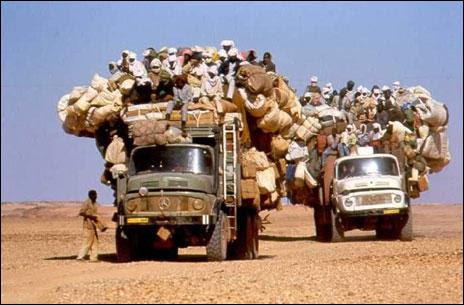 Immigration is the big issue in many north European countries and also the issue the elites and the political establishment do not want to talk about.


Bourgeois professionals might like to 'be seen' to support free immigration for purely selfish reasons related to gaining politically correct kudos, but in opting for an open doors border controls policy are our hand wringing compatriots doing wannabe immigrants any favours. It isn't a short walk from China, Pakistan or Tanzania to Europe and air travel is way beyong the budget of third world peasants.

Criminal gangs in Africa and south East Asia are recruiting desperate people for passages to Europe with promises of jobs and housing and tales of socialist utopias where the government pays all comers a good wage for doing nothing. Too often the would be immigrants are abandoned in hostile country or loaded onto unsafe boats or simply dumped on foreign shore with no money, no documents and no hope.

Death In The Desert - An Ill-Fated Attempt to Reach Fortress Europe.

RELATED POSTS: (this category tagged with Africa, Immigration)
EU Allocates Budget Of €billions To Sell Migrants back To Africa

Rhodes Statue Defaced As South Africa Slides Back Into Primitive Tribalism
A statue of colonial leader Cecil Rhodes at the University of Cape Town has been removed after students launched an uncompromising campaign to have the British explorer and businessman expunged from history. Protesters poured red paint on the bronze figure and danced on the plinth as the statue was lifted off on Friday.
More on the immigration problem affecting Europe and USA

“The United States announces $20 million to support efforts by the United Nations High Commissioner for Refugees (UNHCR) and the International Federation of Red Cross/Red Crescent (IFRC) to provide increased protection, shelter, and lifesaving assistance throughout Europe, including in Greece, Western Turkey, and the Balkans,” the release said.


Pentagon Admits US Ground Troops Involved in Somalia Raid
Pentagon officials confirmed that US ground troops were involved in a raid against a town in Somalia held by fighters of the ISIS afilliated al-Shabaab terror group. The US troops arrived by helicopter to engage the terrorists in a raid which also involved Somali forces, and which they say killed “more than 10? fighters.

Hot on the heels of child sex abuse scandals in Rotherham and Rochdale, another, bigger scandal is set to erupt in brimingham and the West Midlands. Gangs made up of predominantly Pakistani men, using the same modus operandi as the South Yorkshire and Greater Manchester abuse rings, targeted young girls and boys from broken home who were unfortunate enough to find themselves in the care of the local authority. Once groomed the children were raped and prostituted

In all these cases the abuse has been going on for many years and the general public have been aware of it. When concerns were raised with senior police officers, social services chiefs, local politicians and the media they were dismissed as the fantasies of cranks and bigots.

Offcicial paper leaked to the media show tyhis was a recommended response with pressure having come from the highest levls in government to avoid racially sensitive issues.

The financial scandal that emerged after the collapse of Kid's Company, the 'charity' founded by Camila Batmanghelidjh and supported by in turn, Labour, Coalition and Conservative Governments is a perfect illustration of corruption in the public sector and the folly of outsourcing government responsibility to self - interested privateers.