"Everyone who is coming to us would be carefully checked at the border," Fayman told national newspaper Oesterreich.

Migrants from north Africa and the middle east clash with borderr guards on the Austrian border (Image source)
Chancellor Faymann said that from now on, Austria would have to impose strict border controls, and follow neighbour and traditional allyGermany" in implementing measures to deport people who have arrived in the country without proper travel documents or refugee identification.

"At border control points everyone has to show a valid ID to Austrian authorities," Faymann said, adding that if the EU cannot impose proper border controls to secure its external borders, member countries should assert their sovereign right and start controlling their own national borders, Osterreich reported.

Austria plans to use military personnel to prevent illegal immigrants from entering the country as a result of several recent incidents in which the immigrants became violent when civilian border control officers asked for identification. Most of the illegals who enter Europe are hoping to reach Germany or Sweden to apply for asylum in what are reputed to be 'soft touch' counties for illegal immigrants. To get to Germany, having come via Turkey and The Balkans, the immigrants have to to hike across Austria. The violence does not stop once they migrants are in Europe of course, Germany, Sweden, Denmark, Norway and Finland are all experiencing huge increases in rape and sex crimes since the illegal immigrants started arriving.

This move, following the closure of borders and restoration of border controls by Germany, Norway, Sweden and Denmark, essentially means that the Schengen agreement has been thrown out the window, Hungary and several other member states having closed their borders in 2015. The Schengen zone currently has 26 member nations, including most EU countries and four non-EU states. The UK is not a member.

The idea behind the agreement is that the citizens of Schengen countries can access any country without the need to go through border controls and visitors can travel throughout the Schengen zone with one common visa that applies to each country in the Schengen zone. It was never meant to allow illegal immigrants, fugitives from justice and terrorists to enter Europe without having to provide identification or proof of nationality, this is a recent and completely illegal interpretation introduced by socialist leaders of France, Germany and other nations.

If their asylum applications have failed it is because there is no reason to suspect they face death or imprisonment if they are sent back to their country of origin. So we give them a choice, we'll give you a free passage home or you can work dor your living shovelling shit on a pig farm. These people come to us as supplicants and beggars can't be choosers.
Immigration - Europe's burden
Immigration: the plight of the Mediterranean boat people
Is Sweden's immigration policy national suicide
Immigration: there is no promised land
Immigration marginalising the white working classes
The impact of immigration on hospitals and schools
Europe's Immigration Crisis (October / November / December 2015 Moscow, Red Square (Image source)
Significant moves in the geopolitical chess game have just rendered the huffing and puffing of warmonger Obama meaningless and will break the hold Wall Street exercises in controlling oil prices, at least in markets that supply a huge part of the world demand for oil. The move is part of Vladimir Putin's long-term strategy of decoupling Russia’s economy and especially its very significant export of oil, from the US dollar, in effect responding to Obama's attempts to provoke Russia into starting a shooting war by attacking American interests in the Caucasus and middle east by waging a currency war designed to depose the US dollar as the global reserve currency.

Late in November 2015 the Russian Energy Ministry announced that it will begin test-trading of a new Russian oil benchmark. So what you might well say. Well this move has huge significance in terms of global economics. If successful, and there is no reason why it won’t be, the Russian crude oil benchmark futures contract traded on Russian exchanges, will price oil in rubles and no longer in US dollars (the petrodollar). It is part of a de-dollarization move that Russia, China, Iran, India and a growing number of other countries have quietly begun (extensively reported below).

This of course makes nonsense of Barack Obama's claim that the US economy is sound and the most powerful in the world. That Russia and China can so audaciously challenge US economic dominance shows their has been an enormous shift in the balance of global power.

Setting an oil benchmark price is the basis of the Wall Street bank's method of controlling world oil prices. The 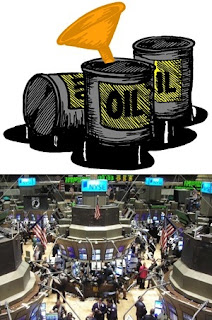 London financial community uses similar techniques to control currency trading. Oil is the world’s most traded commodity. In dollar terms it props up the US economy and gives US companies an immense advantage over non - American competitors.

At present the price of Russian crude oil is tied to the Brent price. The problem is that the Brent field, along with the UK's other major North Sea oil fields is in major decline while the US West Texas benchmark is based on fields enjoying a temporary resurgence due to the fracking of shale deposits. Thus Wall Street can use a vanishing benchmark to leverage control over vastly larger oil volumes. A quick look at historic price trends will show that Brent Crude is always a higher price than West Texas Intermediate (WTI). This is not solely because Brent tends to be better quality.

The sale of oil denominated in dollars is essential for the support of the US dollar (sic). In turn, maintaining demand for dollars by world central banks for their currency reserves to back the foreign trade of countries like China, Japan or Germany, is essential if the United States dollar is to remain the leading world reserve currency. That status as world’s leading reserve currency is one of two pillars of American hegemony since the end of World War II.

Because all nations have to buy dollars to pay for imports of oil and other commodities, countries such as Russia or China find the USA can influence the health of their economies by manipulating the price of dollar in currency markets.

That reserve role of the US dollar, since August 1971 when the USA abandoned the gold standard, has essentially allowed the US Government to run seemingly endless budget deficits without having to worry about interest rates, like having a permanent, unlimited overdraft at your bank. Nations need dollars to pay for their imports, he USA simply forces the dollar exchange rate higher.

That has allowed Washington to run up an $18.6 trillion federal debt without major concern. Today the ratio of US government debt to GDP is 111%. In 2001 when George W. Bush took office and before trillions were spent on the Afghan and Iraq “War on Terror,” US debt to GDP was just half, or 55%. The glib expression in Washington is that “debt doesn’t matter,” assumes that the world, Russia, China, Japan, India, Germany–will always buy US debt with their trade surplus dollars. The ability of Washington to hold the lead reserve currency role, a strategic priority for Washington and Wall Street, is vitally tied to how world oil prices are determined.

In the period up until the end of the 1980’s world oil prices were determined largely by real daily supply and demand. It was the province of oil buyers and oil sellers. Then Goldman Sachs decided to buy the small Wall Street commodity brokerage, J. Aron in the 1980’s. They had their eye set on transforming how oil is traded in world markets. Russia has just changed it for them.

It was the creation of “paper oil”, "paper gold", "paper metals" and so on, commodities traded in futures, contracts independent of the production and supply of physical goods, that really sowed the seeds of the economic chaos we find ourselves in. This 'derivatives' market, which has extended to include almost everything from electricity to bundles of collateralised debt obligations' (mortgages), have made it much  easier for the investment banks to manipulate markets based on rumors and derivative market jiggery - pokery.  Oil is of course the biggest by volume and most valuable commodity traded on markets.

A handful of Wall Street banks have dominated oil futures trades for years and were able to do so because their analysts knew just who held what positions, a convenient insider role that is rarely mentioned in polite company. Moving the market from physical oil to paper oil had the effect of transforming oil trading into a  Las Vegas style casino where the odds were stacked in favour of the banks such as Goldman Sachs, Morgan Stanley, JP MorganChase which own the casinos and run the run the tables.

Until the Russians made their move, Wall Street was the oil market just as London was the currency market. Oil trades in the spot markets of London, Paris, Singapore, and the financial centres of Frankfurt, Lagos, Hong Kong etc. were peripharal, made by traders acting as agents of the New York banks.  Now it will be possible to buy and sell both paper and physical oil in Moscow. And while that may or may not be good news for the rest of the world, it could turn out to be catastrophic for the USA.

We have telling the world for years (and a few thousand of you each day are listening now) that Russia and China have been gradulally executing a plan to replace the the US dollar as global reserve currency. The US of course,as ever too arrogant to care because Americasn exceptionalism, has continued to boost the Russia -China alliance by provoking both with its ill - considered meddling in regional politics and destabilisation of sovereign states. Recall that ...