Did USA Use Syria Ceasefire To Position Itself For Another Escalation Of Conflict?

After US-led airstrikes killed more than sixty Syrian soldiers it was inevitable the brief ceasefire arranged between leaders in Washington and Moscow was dead, ISIS were quick to exploit the disruption in Syria's forces to gain control of government held territory. While the USA claims the deadly air strike was accidental and the result of a 'technical error' this looks increasingly unlikely. The aerial attack and subsequent ISIS offensive (which must have been prepared with foreknowledge that the accidental attack was going to happen,) appears to be another escalation of US-led efforts to provoke Syria's allies Russia, China and Iran. 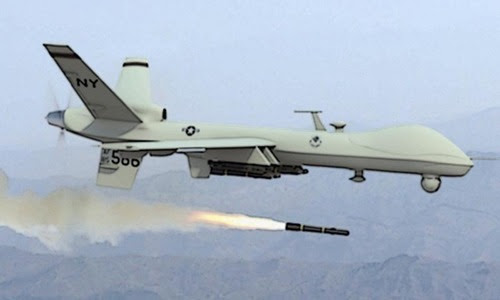 Predator drone fires its payload at a target in Syria (Image source: idawn.com)
“The US Central Command claimed they thought the base belonged to ISIS.  It does now. With the forces decimated by the US attack, ISIS quickly overran the base,” wrote Jason Ditz on Antiwar.com. In fact US CentCom are lying, the site has always remained in the hands of Syrian government troops.

Syria and Russia, both adhering to the ceasefire according to independent monitors – are furious. Syrian President Bashar al-Assad said, “every time the Syrian state makes tangible progress either on the ground or towards national reconciliation, anti-Syrian states increase their support of terrorist organisations … the latest example of this is the flagrant American aggression on one of the Syrian army’s positions in Deir Ezzor to the benefit of Daesh [ISIS]”.

Russian officials are also essentially accusing the west of backing Islamic militants. Russian ambassador to the UN, Vitaly Churkin, said, “It is significant and frankly suspicious that the United States chose to conduct this air strike at this time.” This blog has reported many times that actors the USA, and in particular President Barack Obama and Secretary of State Hillary Clinton were instrumental in forming ISIS for the purpose of overthrowing Assad.

Russian President Vladimir Putin predictatably questioned the US commitment to the [now failed] cease-fire, suggesting that Washington wasn’t prepared to break with “terrorist elements” battling Assad’s forces. Putin has faced down the wuss Obama several times but is aware of the depth of US determination to start a major war in the middle east. China is yet to comment on this latest provocation but Beijing has previously pledged to stand by its allies Syria, Russia and Iran.

Putin said, “In my opinion, [the US wants] to keep the combat potential in fighting the legitimate government of Bashar Assad. But this is a very dangerous route.”

Syrian and Russian leaders know the US airstrikes were intentionally meant to kill Syrian soldiers, and likely to either provoke a response from Assad's allies and/or to assist ISIS.

Regime change is all the US cares about, and after years of failing to oust Assad, provoking Syria and Russia militarily is the phase the US has obviously entered in Syria.

Additionally, the Pentagon confirmed US special forces are on the ground in Syria fighting alongside troops provided by Turkey to the anti - Assad forces . US officials claim the reason for the deployment is to fight ISIS, but that assertion is laughed-off by most, as Turkey’s war is with the Kurds. Throughout the war, until Iran committed its elite troops alongside Assad's battered army, the Kurdish militias have been the most successful force fighting ISIS on the ground.

Greenteeth Bites ]
UN Peace Council: The Syria conflict is a proxy invasion by the United States
This blog and our other publications have been saying ever since the 'Arab Spring' was stirred up by a stupid, demogogical speech made in Cairo by Obama, that the US aim was a proxy war with Russia and Iran in the middle east. Look what happened since then. Secular Muslim leaders in Egypt and Libya were overthrown by US led regime change campaigns ...

Russia Accuses USA & NATO Of Defending ISIS
Haiti President Blows Whistle On Clinton: "Hillary Tried To Bribe Me!"
MPs attack Cameron over Libya 'collapse'
Top Academic: Muslims Would Not Tolerate Multiculturalism in Islamic Countries
The Difference In Voting For Hillbillary or Trump Is One Promises War With Russia, (the other is named Donald)
Wiki Leak Found Email Linking Obama, Clinton To ISIS
Saudi Arabia Launches Chemical Attack on Sana'a, Killing Civilians
Genocidists Go Free, But Only If They Are The New World Orders Genocidists.
New Emails Reveal Hillary Clinton Gave Special Access To Foundation Donors
How Media Distorted Syrian Ceasefire’s Breakdown
Ukraine Ready To Explode? Russia Deploys S-400 Missile System To Crimea
Success in Syria Gives Putin The Advantage In Obama's Proxy War In Syria
It Looks As If Demonising Russia Is All Discredited Hillary Clinton And Her Supporters Have Left
Now Turkey's Lunatic Leader Wants To Start World War Three
US General Breedlove admits: NATO did foment war in Ukraine
Will 'President Trump' Mean The End Of NATO?
No to War – No to NATO: Protesters in Warsaw Condemn US / EU Aggression
NATO Baltic Mission 'All About Countering Russian Aggression'
Non-Firing Guns & Killer Ejection Seats – UK Takes Delivery Of US Advanced Fighter Jet
Why Do The Western Powers, The United nations And The EU Continue To Tolerate The Terror Sponsor Erdogan And Turkey
US Policy Of Containing China in South China Sea Will Destabilise The Region
US Warned It Is Playing With Fire by Repeatedly Provoking China in S China Sea