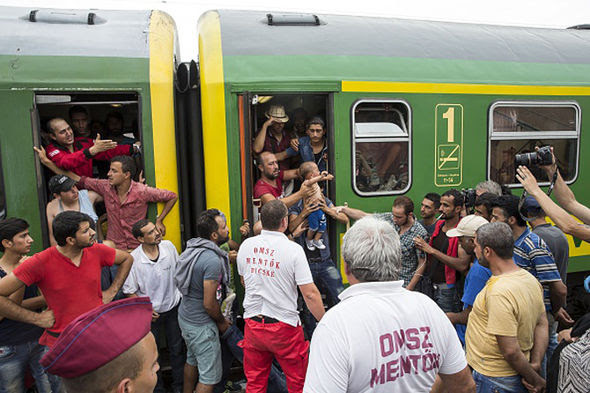 Another boatload of illegal immigrants leave Libya for Europe. Oppressed? Victimised? Fleeing in fear of their lives? They look as if they are setting out for a picnic. (Image source)
One has to wonder whether the political leaders of western nations are all stupid, are suffering from some kind of collective insanity or really hate their own countries and cultures so much they will go to great lengths to destroy both.

In their latest exhibition of collective idiocy, European Union leaders are proposing to offer Turkey huge cash payments and special treatment to push through its application for E U membership. They hope these pledges will obtain Turkey's cooperation in slowing the surge of migrants entering Europe illegally. The offer will be made at yet another crisis summit Today (29 November 2015), although key issues remain to be hammered out.

What will not be on the agenda, we confidently predict, will be the twin issues of Turkey's involvement in smuggling oil from wells in ISIS held territory into western markets, in violation of numerous treaties, international law and United Nations resolution on terrorism, and Turkey's role as middle man in supplying US arms and ammunition to ISIS

EU Officials said the European Commission is expected to agree a three-billion-euro ($3.2 billion) cash sweetener to encourage Turkey to fund efforts to stop the flow of refugees to Europe from the conflict in Syria, 2.2 million of whom are currently in Turkey. Now it is cogent here to point out the majority of illegal migrants arriving in Turkey are not refugees from Syria, but economic migrants from elsewhere in the middle east and from north Africa. This has been documented by humanitarian aid agencies working to help the migrants.

Apart from the issues of Turkey (and significantly family members of the crooked President Edrogan) being involved in the illegal trade in ISIS oil and the supply of arms to Europe's enemies, we must also ask why our leaders are not raising questions about Turkey's genocidal war against the Kurds in the east of their country and also Turkey's track record of helping and supporting anti - western organizations throughout the middle east. And of course the sure and certain knowledge that while most Turkish people are friendly and generous, their country is run by lying, extremist shits who sympathise with the Islamic State and its aims.

but this latest betrayal of Europe's people and heritage by European Union leaders committed to the creation of a global totalitarian government does not end there.

Turkish Prime Minister Ahmet Davutoglu, deputising for President Erdogan, is also set to secure a deal for the opening in December of a new chapter in Turkey’s stalled accession talks for the 28-nation bloc. This move is being pushed by Germany, whose leaders see admission of the 90 million population Islamic nations as securing a supply of cheap labour for its factories. If Turkey is admitted however it might be suicide for the Union, as several east European members are still hostile about the brutal oppression of Orthodox Christianity under the Sultan's of The Ottoman Empire before 1918.

Turkey’s act of aggression in shooting down of a Russian jet on the Syrian border on Tuesday and Erdogan’s decision to skip the summit will not do anything to ease tensions between Brussels and Ankara and have hardened anti - Turkish opinion in Greece, The Balkan States, Bulgaria, Hungary and Austria .

EU president Donald Tusk said in his invitation letter to leaders however, that the summit “will mark an important step in developing our relations and contribute to managing the migration crisis”.

Pushed by German Chancellor Angela Merkel to hold the summit as she seeks to ease the refugee burden on her country, Tusk decided to go ahead with the meeting despite a major terror alert in Brussels.

As EU leaders meet the Turkish Sultan President Recep Tayyip Erdogan,prepared to offer him whatever he asks for, on top of the five billion Euros he has already trousered in return for Turkey’s empty promises of help in controlling the flow of criminals, rapists, people traffickers and jihadists refugees from all over the middle east, Asia,and Africa Syria ...

Putin Lines Up The Big Guns As Obama 'Shoots Golf' And Kerry VacillatesThings are getting serious (and very dangerous) in Syria. ISIS do not have warplanea and SAMs are not effective against ground troops so this latest Russian move can only be interpreted as a warning to the USA

Russia's Upper Hand In Syria Forces USA To Negotiate On Assad's Future
Why is John Kerry suddenly so eager to talk to anyone and everyone about Syria now when the war between Assad and the US sponsored Sunni Jihad has been dragging on for four and a half years? Are members of the Obama administration worried that the joint Russian / Iranian campaign in the air and on land has been too successful against ISIS and exposed as a sham the efforts of the USA and it's allies to 'defeat ...

Russia Takes Over The Mid-East: Moscow Gets Green Light For Strikes In Iraq, Sets Up Alliance With Jordan
Not long ago we were reporting on the way moves in the war against ISIS had shifted the global power balance from west to east, with Putin's decisive and efficiently executed moves to drive the Islamic State forces out of Syria and Obama's failure to repond in any intelligent way demonstrating to the world that the USA had surrendered its role as the dominant military power.

NATO violates treaty to support the Evil EmpireSince the Russians got fed up of Obama using his ISIS puppets to attack Russia's long time ally Syria, exposed American claims they were fighting the ragbag army of fanatics, criminals, mercenaries and ragheads The Ministry Of Truth (i.e. government public relations departments and all of western print and broadcast media) has turned the outrage generator up to eleven in their efforts to demonize Russia and its leader Vladimir Putin.

Only 5 Percent Of Russian Air Strikes Hitting Islamic, British Defence Secretary Lies
After an amazing outburst from the delusional Brack Obama left the United Nations General Assembly in stunned silence because Obama has accused Russia and China of all the recent breaches of international law of which the USA is demonstably guilty, the propaganda departments of western governments seem to have totally lost their grip on reality.

We must vote for Brexit before Turkish accession.
Latest Posts