Could Israel Be Planning Nuclear Strikes On Iran

The USA is already engaged in one proxy war as the CIA installed puppet government in Kiev combats Russian separatists in east Ukraine, and another against Iran as the US backed, armed, trained and financed rebels fight Bashar Assad's government in Syria while US military aircraft carry out strikes against US backed, armed and trained ISIS guerillas fighting to establish an Islamic Caliphate in the middle east.

ISIS are also fighting the Iranian backed government of Iraq, the Kurds though we cannot be sure where their allegiance lies and have been involved in skirmishes with the Turks. And now we hear things may be about to get a lot worse with another of America's proxy wars about to kick off ... 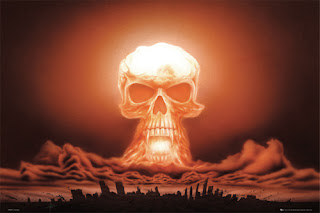 Thinking About the Unthinkable: An Israel-Iran Nuclear War
By John Bosma

The signing of a Munich-class agreement with Iran that hands it more than it ever hoped to pull off represents a shocking, craven American capitulation to an apocalyptic crazy state: a North Korea with oil. Nothing in Western history remotely approaches it, not even Neville Chamberlain's storied appeasement of another antisemitic negotiating partner.

But it also augurs the possibility of a nuclear war coming far sooner than one could have imagined under conventional wisdom worst-case scenarios. Following the US's betrayal of Israel and its de facto detente with Iran, we cannot expect Israel to copy longstanding US doctrines of no-first-nuclear-use and preferences for conventional-weapons-only war plans. After all, both were premised (especially after the USSR's 1991 collapse) on decades of US nuclear and conventional supremacy. If there ever were an unassailable case for a small, frighteningly vulnerable nation to pre-emptively use nuclear weapons to shock, economically paralyze, and decapitate am enemy sworn to its destruction, Israel has arrived at that circumstance.

Why? Because Israel has no choice, given the radical new alignment against it that now includes the US, given reported Obama threats in 2014 to shoot down Israeli attack planes, his disclosure of Israel's nuclear secrets and its Central Asian strike-force recovery bases, and above all his agreement to help Iran protect its enrichment facilities from terrorists and cyberwarfare – i.e., from the very special-operations and cyber forces that Israel would use in desperate attempts to halt Iran's bomb. Thus Israel is being forced, more rapidly and irreversibly than we appreciate, into a bet-the-nation decision where it has only one forceful, game-changing choice -- early nuclear pre-emption – to wrest back control of its survival and to dictate the aftermath of such a survival strike.

How America corrupts the news