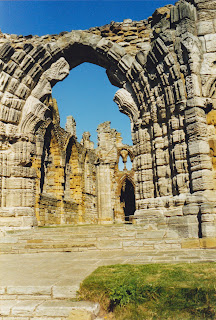 The cover pic, a portal in Whitby Abbey is more significant than most people will realise. In the seventh century Whitby Abbey was the scene of a meeting that shaped the future of Europe's political and cultural map.

As we continue to build this blog as a useful addition to our cluster of we site, t seems like a good idea to provide a daily roundup of posts to increase the significance of our most featured topics, political malfeasance, corporate corruption, scientific jiggery pokery, left wing hypocrisy and the insanity of politically correct, globalist thinking.
The page will be updated throughout the day as more posts are added.,/p>
Here we go then with the round up for January 17, 2014.
Seventy Years Down The Line And We Have Come Back To Appeasement As A Means To Peace.
As a spate of increasingly bloody and violent attacks on civilized values and the democratic freedoms of the western nations (free speech for example) continues to cause revulsion among the general population, our spineless leader are calling on us to be tolerant. The cowardly hypocrites who lead us may be ready to surrender, but anger is mounting in the cities and towns.
‘Uncaged Corporate Parrots’ Of The Political Elite and The GMO False Narrative
The Environment Secretary in the UK Coalition Government, Elizabeth Truss has argued that genetically modified (GM) food should be grown in Britain because it is more ‘eco-friendly’. She adds that steps should be taken to speed up this development.

Earth’s CO2 Levels Pass Global Warming ‘Milestone', Nothing Happens - Daily Caller.
After two decades of panic stricken scientists and screeching lefties wailing about the catatrophe that would ensue once the concentration of carbon dioxide (CO2) in the atmosphere passed 400 parts per million, that figure was reached in December 2014.

Former Pro-GMO Scientist Speaks Out On The Real Dangers of Genetically Engineered Food I retired 10 years ago after a long career as a research scientist for Agriculture Canada. When I was on the payroll, I was the designated scientist of my institute to address public groups and reassure them that genetically engineered crops and foods were safe. There is, however, a growing body of scientific research – done mostly in Europe, Russia, and other countries – showing that diets containing engineered corn or soya cause serious health problems in laboratory mice and rats.I don’t know if I was passionate about it but I was knowledgeable. I defended the side of technological advance, of science and progress. I have in the last 10 years changed my position. I started paying attention to the flow of published studies coming from Europe, some from prestigious labs and published in prestigious scientific journals, that questioned the impact and safety of engineered food. I refute the claims of the biotechnology companies that their engineered crops yield more, that they require less pesticide applications, that they have no impact on the environment and of course that they are safe to eat. There are a number of scientific studies that have been done for Monsanto by universities in the U.S., Canada, and abroad. Most of these studies are concerned with the field performance of the engineered crops, and of course they find GMOs safe for the environment and therefore safe to eat. Individuals should be encouraged to make their decisions on food safety based on scientific evidence and personal choice, not on emotion or the personal opinions of others. We should all take these studies seriously and demand that government agencies replicate them rather than rely on studies paid for by the biotech companies. RELATED:
RELATED:
Black Hat Biotech index
GMO corporate lies
Europe’s Intensifying Immigration Debate
In an absolutely gobsmacking psychological meltdown and an unparalleled display of bourgeois self hate, the former Swedish Prime Minister Fredrik Reinfeldt demonstrated how wide the gap between the political and academic elite and reality has become in the materially advanced democracies. He also made himself an early fron runner for the title "cupid stunt of the century.
Posted by Boggart Blogger at 6:22 AM No comments: