No to War – No to NATO: Protesters in Warsaw Condemn US / EU Aggression

POLAND, Saturday 9 July, 2016: Crowds of anti - war protestors gathered in Warsaw to stage a rally against NATO expansion into Eastern Europe. Police tried to stop groups of people joining the demonstration, but the organizers managed to avoid confrontation and settled the issue with police officials. 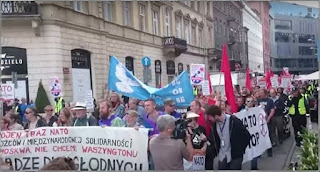 "No to war — No to NATO" — the chants and placards of peace protestors demanded, as a substantial crowd gathered in the center of the Polish capital as close as they were permitted to get to the venue of a summit meeting attended by US President Barack Obama and other NATO national leaders.

According to protesters, the North Atlantic Treaty Organization's repeated provocations of Russia, including increased troop movements and military exercises in Baltic States Estonian and Latvia, only a few kilometers from the Russian borders Europe, represent a threat to peace and stability, and indicate that the US and its allies are preparing for a major war.

Filip Ilkowski  No , speaking for the 'No to War — No to NATO' initiative told news agencies that Polish peace activists have a long tradition of protesting against militarization. They predicted the negative consequences of the 2003 war against Iraq which has led directly to the current chaos in the middle east, and are now warning against militarization in Eastern Europe.

Ilkowski's group was one of 6 Polish organizations taking part in the 2016 Warsaw counter-summit, a series of meetings and a demonstration against NATO activities.

"From a symbolic point of view this is a very important demonstration," says Ilkowski. "Because the whole Polish political establishment and the majority of Polish media is united for both militarization and NATO troops in Poland. So when we have an alternative view and at the same time organize protest, of course it's not easy. But, at the same time, it's clearly important and in the long perspective, I think the question of militarization will be very important in Poland."
Besides local activists, the demonstration was attended by people from 18 countries including Russia, Czech Republic, Ukraine, Poland, France, Germany, Great Britain, Belgium, Spain and the US.


Phil Wilayto, a  member of the United National Antiwar coalition traveled to Warsaw from the US to voice his concerns about NATO expansion which is planned to drasg Ukraine, Georgia, Armenia and several highly unstable Balkan states into the alliance, in parallel with a similar expansion of the European Union. Wilayto said that people in the US get little  information from the media about what's really going on in the world. As we have reported earlier this year, though Obama claims his administration is "the most transparent ever" US citizens and the rest of the world get more information on US Foreign Policy from Wikileaks than from The White House ot The State Department.


"This is Presidential election year, and none of the candidates, from the right or the left is really talking about what the US is doing, how we have military forces in 150 countries around the world, how the US military budget is equal to the next 9 countries combined, how the US is pushing NATO to expand eastward, toward Russia. How the US is responsible for the increasing tensions, how the US was behind the right-wing coup that overthrew the president of Ukraine, and the new president, that came in now, wants to join NATO — what a surprise!" Wilayto said.
RELATED POSTS:

Hacked E mails Prove US, EU and NATO Policy Of Provoking And Escalating Conflict With Russia
Why Do The Western Powers, The United nations And The EU Continue To Tolerate The Terror Sponsor Erdogan And Turkey
One Day Czechs Will 'Wake Up To Find That US Troops Are Here to Stay'
US Missile Shield; Loved Up Obama And Cameron Laugh As Putin Warns Poland, Romania Now In The "Cross Hairs"
Germany Involved in NATO War Games Near Russian Border
After Yugoslavia NATO changed from a mutual defence alliance to an organisation for military aggression.
Castrating Project Fear: Former-UK Army Chief Shoots Down Claims of Brexit Impact on NATO
Propaganda War: US Officials Working to Keep Russia, Europe at Odds
NATO Warships in the seas Odysseus Sailed Spell Trouble For EU
Ignorance Is Strength: European Parliament Ready To clamp Down On Free Speech
Fear and Panic: EU Defence Budgets Boom Amid ‘Russian Threat’ Paranoia
‘I’m back from Syria. The media are lying to you.’ Eva Bartlett
NATO Rhetoric About Russian Threat is 'Absurd'
Is USA preparing for all out war with Russia
More Evidence That Hillary Clinton Leaked Secrets damaging To The USA
Why is Washington Worried As Georgia's Turns To Russia?
NATO’s humanitarian Convoys Delivering Arms And Ammo To ISIS Halted at Syrian Border
NATO violates treaty to support the Evil Empire
Is USA Preparing For War Against Russia In The Baltic Region?
Support For EU / US Sanctions On Russia Declining In Central Europe
'We Got Duped': Ukraine Billionaire Slams EU Free Trade 'Fraud'
The Demise Of Dollar Hegemony: Russia Breaks Wall Streets's Oil-Price Monopoly