Rumours circulating in the business community suggest Europe may have trouble replenishing its natural gas reserves kept in storage facilities around the continent by next winter as storage levels are at their lowest levels for over a decade.  Although sanctions have not yet been applied to prevent EU nations buying oil and gas from Russia, which supplies one-third of Europe's natgas needs, pressure from politicians and media is forcing oil companies and energy generators to shun Russian sources.

On top of this, with Germany having blocked the certification of Nord stream2 pipeline with runs from the Gulf of St. Petersburg, through the Baltic to Germany, much of Europes essemtial suply of natural gas is delivered by pipelines that run through Ukraine. Should the conflict escalate to the point at which Putin decides to up the pressure on EU member states by cutting off the gas, these pipelines will be a natural target. 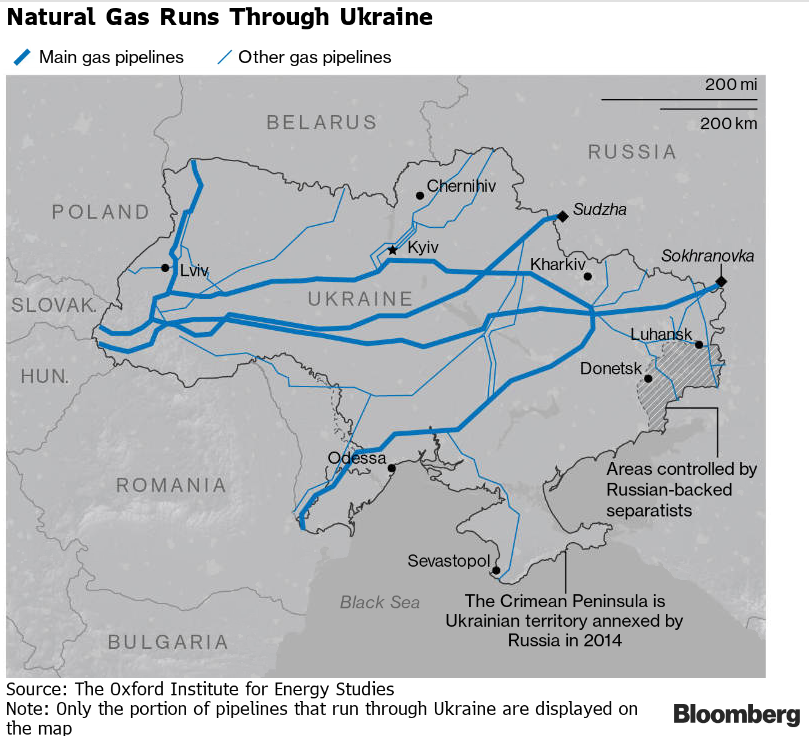 On Monday (28 February), Russia's biggest energy company Gazprom issued a warning that there will be "serious challenges" in restocking European gas storage facilities before next winter considering "such significant gas volumes" are needed. This happened ahead of the summer months before.

Gazprom said there could be daily restrictions on volumes because of the technological capacities of the pipeline infrastructure. There's also a risk of damage to pipelines from Russia through Ukraine. On top of this, Gazprom added, European markets will be competing with increasing demand from Asian markets.

Bloomberg published data last month showing that underground storage tanks in Germany "are depleted" by 70.6%, while French ones are 77.1%. Gas withdrawal from European storage lasts until late March and, in some cases, early April. Gas injections begin shortly after to resupply the continent for the summer months and ahead of next winter. However, since storage levels are so low lev els, and the extraordinary circumstance of a regional war in the area between Russia's oil and gas fields and Europe's industrial areas means restocking in preparation for next winter's peak demand could be a problem.

Then there's the risk of Russia cutting off or rationing supplies to Europe in retaliation for the economic sanctions imposed as a punitive measure after the incursion into Ukranian territory and the  freezing of Russian central bank assets. The way Russian banks were removed from the SWIFT financial messaging system, which has caused utter chaos in Russian markets on Monday, especially in FX markets has not helped either. Western political leaderrs should have taken stock of how vulnerable their economies have become to hostile Russian actions before they started throwing their weight about

All in all it looks like Joe the demented paedo, BoJo the Clown, Little Emmanuel, Justin Turdeau and the rest of the gang have hamstrung their own nations while failing to perturb Russian leaders. Quel surprise,  who would have expected such complete incompetence from our ruling elites.

What The Right Gets Wrong About Putin

A fracture on the international right may seem small fry given everything that is going on right now. But it is worth loitering over. Because in recent years an interesting divide has grown among conservatives on both sides of the Atlantic. On one side are the Cold War warriors and their successors who have continued to view Vladimir Putin’s Russia as a strategic threat. Meanwhile, a new generation has arrived at a different view.

While the West has deranged itself with assaults on its own history, on biology and much more, an assortment of conservatives have come to see Putin as some kind of counterweight. A bulwark – even an admirable corrective – to the madness of our own societies.

As a guest on Steve Bannon’s talk show recently said: ‘The Russian people still know which bathroom to use.’ Of course knowing which bathroom to use isn’t everything. Certainly it is no basis for a foreign policy. But such shorthand has become commonplace. ... Continue reading >>>