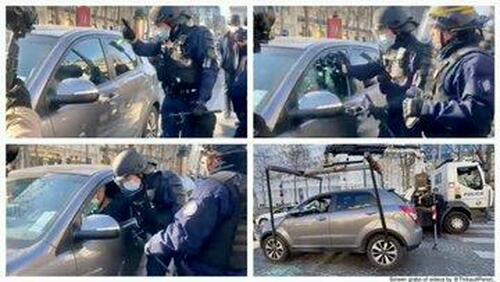 Reports from French News agency AFP  told of, "thousands of cars, vans and trucks" entering the Paris metro area, blocking routes and bringing the French capital to a standstill. The Paris protest was the climax of a rolling protest, a Freedom Convoy which expressed the anger of French people against President Emmanuel Macron's medical tyranny, the heavy handed policies of lockdownsvaccines, mask and social distancing laws, forced vaccines mandates and the imposition of vaccine mandates to enforce the social exclusion of people who refused the now discredited COVID vaccines.

Althoygh protests are currenty banned in the city as part of Marcon's deperate attempts to maintain some kind of authority in a nation drifting towards anarchy, police leave was cancelled and  more than 7,000 officers were deployed to deal with the "Freedom Convoy."

Like the original Freedom convoy protesting the authoritarian (fascist some commentators have said,) measures introduced by the regime of Justin Trudeau, which has now been crippling the Canadian economy for almost two weeks, France's Freedom Convoy is making the headlines beyond national borders. The New York Times website commented on the police action:

Officers had set up checkpoints at several of the main entrances to Paris on the road that surrounds the city, known as the Boulevard Périphérique. That prevented many demonstrators from entering.

But small clusters of protesters who managed to get past the checkpoints gathered at several places in the city, honking their cars and waving French flags. Some joined up with the anti-vaccine-pass marches that had been held on most weekends in Paris but had waned in recent months.

The different convoys, which had started out in cities like Nice, Brest, Lille and elsewhere, appear to be only loosely coordinated on social media and on instant messaging platforms. -NYTimes

There have not yet been any reports of violence in central Paris though French protests are oven volatile affairs with the paramilitary Gendarmarie always eager to confront the more unruly protestors. So far  people waving French and Canadian flags and chanting: "QR code, never again!" "Freedom!" "No to the vaccine pass!" represent to most strident aspects of the protest. 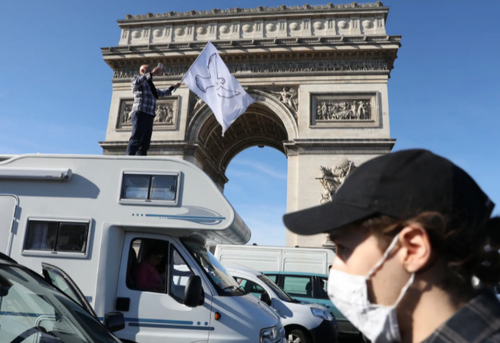 French Canada-inspired "Freedom Convoy" of protestors faced the usual attempts to scare them into compliance that have become the trade mark of the Macron presidency. Throughout his term in office the president has not learned such tactics only harden opposition to his autocratic style of governing and in spite of the threats and intimidation the protests went ahead.

"The stated objective of these demonstrations is to 'block the capital' by preventing road traffic from circulating in order to further their demands … from Friday, before moving on to Brussels on Monday," Paris' police authority said.

"Because of the risk to public order, these protests will be banned from 11 to 14 February," police said, adding that anyone blocking public roads will face severe fines and jail time.

"We've been going around in circles for three years," said demonstrator Jean-Marie Azais, who was heading to Paris. "We saw the Canadians and said to ourselves, 'It's awesome what they're doing.' In eight days, boom, something was sparked."