US Military Contractors Happy With Escalating Conflicts in the Middle East

My friends and I have been telling you since the US led coalition invaded Afghanistan in 2001 that the USA's perpetual war on terror was not about making the public safe and secure but instead about corporate profits and political power.

If you are not convinced yet, read this:

Major defense contractors Raytheon, Oshkosh, and Lockheed Martin assured investors at a Credit Suisse conference in West Palm Beach this week that they stand to gain from the escalating conflicts in the Middle East.

Lockheed Martin Executive Vice President Bruce Tanner told the conference his company will see “indirect benefits” from the war in Syria, citing the Turkish military’s recent decision to shoot down a Russian warplane.

The incident, Tanner said, heightens the risk for U.S. military operations in the region, providing “an intangible lift because of the dynamics of that environment and our products in theater.” He also stressed that the Russian intervention would highlight the need for Lockheed Martin-made F-22s and the new F-35 jets.

And for “expendable” products, such as a rockets, Tanner added that there is increased demand, including from the United Arab Emirates and Saudi Arabia because of the war in Yemen.

So there you have it. War makes everybody happy. Except the taxpayers and of course the families of military personnel who lay down their lives.


The US Helped Overthrow Gadaffi And Create A Liberal Democracy. Now It Is A Failed State. 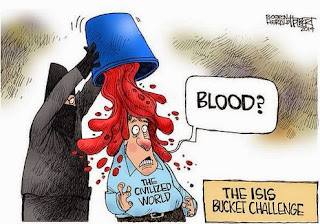 Change is the same (Image source)
We want to avoid the usual hyperbole on this story, but victory for France’s Front National in the first round of regional elections on Sunday (6 December, 2015), in which the anti EU party led by Marine Le Pen lead the vote in six of France's thirteen regions, will shake up the political landscape not only in France but throughout Europe and possibly further afield.

With the FN vote boosted by fears of further terrorist outrages following the Islamic State attacks that left 130 people dead and many seriously wounded in Paris on Nov. 13, as well as by the socialist government's abysmal economic record and catastrophic levels of unemployment and immigration, Le Pen’s party secured 29.4 per cent of the vote nationally with over 85 per cent of the votes counted, according to official government figures.

Twenty-five year old Marechal-Le Pen, the granddaughter of party founder Jean-Marie Le Pen and niece of party leader Marine, led the first round in southeast France with 42 percent – twice her grandfather’s score there in 2010. Run-offs will be held on Dec. 13.

With attention shifting from these regional polls to the 2017 presidential and parliamentary elections, with French politics now clearly a three-way race after Sunday’s election, ending decades of domination by the Socialists and conservatives. The election results have caused so much panic in the political establishment that traditional enemies, the socialists and conservatives are collaborating to block the anti - EU party and usurp the democratic process. In France, as in the UK and USA, voters perceive little difference between the mainstream parties, which all support globalism, politically correct policies on immigration and minorities and globalism, with the possibility of a global, totalitarian government of unelected bureaucrats being frequently raised in forums like the United Nations, the G20 meetings and other gatherings of world leaders.

While the FN is well placed to win one or more regions in the Dec. 13 run-off, especially after Marine Le Pen attracted over 41 per cent of the votes in the north, the third placed Socialist party demonstrated it's anti - democratic nature by announcing that it was pulling its candidates out of the race there and in the southeast.

The Socialist party is putting up a “barricade” to the right where it is far behind, party chief Jean-Christophe Cambadelis said. “The Left is the last shield of democratic France against the xenophobic far-right,” he said. There speaks a true effing democrat. NOT!

Opinion polls before the election had, however, shown that Le Pen could win even if the Socialists pulled out, a result which would encourage anti - tyranny voters everywhere, especially in the UK where just a few days ago we witnessed the leaders of both Conservative and Labour parties tacitly condoning electoral fraud that reduces British democracy to the levels of third world political corruption.

Electoral Reform in Britain - Is It Time for True Proportional Representation?

The conspiracy pushing us to corporate fascism

Democracy being murdered by mainstream media

The Importance Of Free Speech In Democracy