Tuvalu from the air - picture souce: screenshot from ITN news

As readers of this blog might expect, the COP26 conference on climate change currently taking place in GLASGOW, Scotland is an exercise in talking bollocks for world leaders, freeloading weirdie - bearies who ponce a living working for 'green charities' and third world freeloaders  who turn up in the hope of blagging some cash from the virtue signallers of the global elites, who are always eager to hand over vast amounts of our hard earned, stolen from us through taxes to economically and socially non - functioning pygmy nations. One such is Tuvalu, a sandbank (see picture above) in the South Pacific that is home to about 10,000 people.  “Tuvalu is sinking,” was the heartfelt plea from Finance Minister Seve Paeniu. Paeniu proclaims his island nation is about to be submerged by sea levels which are rising because of climate change. as he sits down to address world media at the U.N. Climate Change Conference.

With a population of just over 11,000 residents, Tuvalu is an idyllic South Pacific atoll consisting of nine low-lying islands whose highest elevation is roughly 15 feet. Thanks to sea level rise, the weirdie - beardies of the green blob claim, each year that elevation shrinks a little bit more. Well it is not difficult to understand that an Albatross poo plopping into the sea just offshore would produce a wave big enough to swamp Tuvalu.

“That’s why we are here at COP26,” the minister says to the climate conference, “to tell our story to the world. The world needs to take action now, not to defer it to later years.”

Paeniu, 56, tells a good story too, unfortunately that's what it is, a story. But we'll let Mr. Paeniu have his moment before we examine the facts.

“There’s inundation," he tells his credulous audience Water’s just infiltrating the water links below the land, places where water doesn’t come through now is all flooded. There are storm surges when there are cyclones that just come and wash right across the whole land. ... Never that happened before,” Paeniu says. “We have land territory being submerged or disappearing where there used to be vegetation and agriculture.”

"With no rivers or wells for fresh water, the residents of Tuvalu must collect rain for drinking water or import diesel desalination plants, though the latter solution is expensive. As the ocean waters have advanced, agriculture has been made more precarious, and once-abundant fishing has also begun to turn.

“Food security has been severely threatened, and even our fisheries,” Paeniu says. “We see coral bleaching, acidification of the sea water, that’s now affecting our food supply.”

"To make matters worse, tropical cyclones have been growing more powerful, thanks to rising land and ocean temperatures, leaving Tuvalu and other island nations at heightened risk.

So well did the Tuvaluan tell his story that the world's leading bandwagon rider, Barack Hussein Obama, former male crack ho and United States President quickly threw himself behind the cause. “Islands are the canary in the coal mine in this situation,” former President Barack Obama said in a Monday speech at COP26. “They are sending a message now that if we don’t act — and act boldly — it’s going to be too late.”

Well OK, we know Obama has a track record for preferring fantasy, sentimentality and scaremongering to facts, but the key to understanding the reality of Tuvalu's plight lies in the geophysical situation of Tuvalu. Do you remember that I commented in the minister's claim that his homeland is sinking, that he spoke the truth. Tuvalu is literally sinking , sea levels are not rising significantly, the land level is getting lower. To cut to the chase (although it's a chase that moves in extreme slo-mo,) Tuvalu's problem is tectonics, not climate. This small archipelago of atolls and volcanic (clue) islands stands, or perhaps I should say sinks on the very edge of the Australo - Indian tectonic plate is being pushed down beneath the more aggressive Pacific Plate.

The good news for Tuvalu is these processes are extremely slow and the island nation's land area is showing a net increase due to volcanic activity around the volcanic islands adding land more quickly than the atolls are losing it due to sinking tectonic plates. 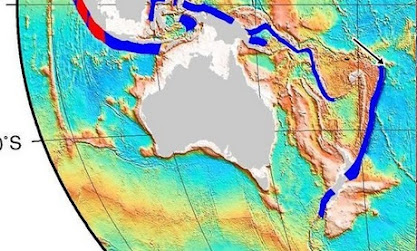 from Collins World Atlas - black arrow shows approxinate position of Tuvalu.
Thick blue lines are geological fault lines where tectonic places are clashing together, pulling apart or simply rising and falling at rates of uo to 2 centimters per year. There are often high levels of volcanic activity along fault lines.

The bad news for Tuvalu is that the geological processes of tectonic plate actibity are inexorable, even if the COP26 delegates could agree to suck every last drop of Carbon Dioxide out of the atmosphere, thus destroying all life on the planet (BTW guys, great way to save the planet eh?) Tuvalu would still be sinking.

And the bad news for us long suffering taxpayers of the developed nations is that instead of saying to the people of Tuvalu, OK we know it's your home so stick it out as long as you can and then, as there are only 10,000 of you we'll get you out to Australia, New Zealand, UK, Canada, no problem, we all get more than 10,000 illegals flooding in every month so 2500 each isn't going to make a difference.

READ MORE ABOUT THE PANDEMIC OF BOLLOCKS AT:
IT'S BOLLOCKS MY DEARS, ALL BOLLOCKS.