via Asia Times of Hong Kong

Although people in India are cautiously welcoming the ongoing anti-corruption raids on opposition party leaders and their families, viewing them as proof of the federal government’s resolve to fight corruption, others see what has been happening as amounting to a political vendetta by the ruling Bharatiya Janata Party (BJP).

The selective targeting and timing of the raids ahead of opposition plans to forge a grand alliance to fight the 2019 national elections raise suspicion about the government’s true intentions. Some allege they are being conducted simply to divide the opposition parties.

Chidambaram already faces an investigation over his role in the Aircel-Maxis case. It is alleged he gave illegal clearance to the Malaysian firm Axis to buy Aircel, a mobile network operator based in Gurgaon, in Haryana state, through foreign direct investment in 2006.

Tuesday’s multiple raids were conducted to ascertain whether Chidambaram misused his position as finance minister in 2007 to facilitate kickbacks for his son by clearing foreign investment payments worth Rs3,050 million (US$47 million) to a media firm, INX.


Poverty tycoons who make themselves millionaires from taxpayer-funded foreign aid budget
In response to questions about Britain's overseas aid budget,David Cameron has said at the United Nations that rather than cutting aid to developing nations in these austere times UK taxpayers should be happy it is being increased. Meanwhile with her own millions safely tied up in trusts Hillary Clinton demands global wealth taxes to raise money for helping the disadvantaged.

Overeducated Elitist Snobs Go For World DominationWe have written many times with tongues in our cheeks of The New World Order but what are we talking about. Is it a conspiracy theory like The Illuminati, are there shape shifting lizards involved. We wish, but sadly it is just a concensus political movement that blurs the lines betwen old parties but hardens those betwee the political, academic and financial elite and the lowrer orders. Find out how it operates below ...

The Two Faces Of The Politics Of FailureWhat a mess the modern way of doing politics based on a politically correct consensus and social engineering has produced. The daily stirrer looks at how the bipolar left - right divide stops things getting better rather than helping get the developed world back on track.

The Madness Of The Carbon Accounting System

Life Expectancy Rises By 44 Days In One Year

The Human Cost Of Cheap Clothing

After the White House dropped a carefully worded statement 'welcoming' the appointment of former FBI director Mueller as Special Counsel on the "Russia Probe", it was only a matter of time before President Trump would take to Twitter to provide a more candid version of his views on the matter. The President did not disappoint, last night he posted the following tweets:

"With all of the illegal acts that took place in the Clinton campaign & Obama Administration, there was never a special counsel appointed!"


"This is the single greatest witch hunt of a politician in American history!"

On the basis if the available evidence we have to acknowledge he has valid points on both counts. Also, we now know that Trump was unaware of Deputy Attorney General Rosenstein's efforts to appoint a Special Counsel until after the order to do so had already been signed, as the DOJ intimated last night.

It seems very inconsistent, after all the revelations of intentional evidence destruction (remember BleachBit), despite the known existence of a Congressional subpoena, intentional violations of the Federal Records Retention Act, secret Bill Clinton meetings with the Attorney General on Phoenix tarmacs and the passing out of immunity deals "like they were candy" by former FBI Director Comey, that no special counsel was ever appointed by the Obama administration to look into Hillary's case, yet one has been appointed to look into Trump's alleged collaboration with Russia even though not one shred of evidence has been produced to support those allegations. Will Trump now insist that one be appointed? Will somebody, at long last, go after 'Crooked Hillary, her sex pest husband and the party of perverts that made her its presidential nominee?


The left wing media is going batshit crazy over the “Comey Memo” story, although it was discredited only hours after it broke, with the alleged 'memo' turning out not to be an official document but a hand written note, not seen by anybody until after Trump fired Comey. Still, just as in medieval witch hunts the word of a gentleman was sufficient evidence on which to convict, it appears that in Washinton Witch Hunts the word of an associate of the clintons or Obamas is sufficient evidence to trigger a consitutional crisis. One gets the feeling that liberal media pundits just bit off more than they can chew.

As was reported yesterday, congressman Jason Chaffetz requested a subpoena of Comey’s memo, and ALL Comey memos related to Pres. Trump *and* Pres. Obama, as well as Trump & Obama DOJ officials!!

That means that we’re going to see Comey’s communications on that meeting between Loretta Lynch and Bill Clinton on the tarmac at Phoenix airport, shortly before Attorney General Lynch dropped a case against Hillary Clinton, and all of the other dodgy dealings by officials in the SWAMP that was the Obama administration! 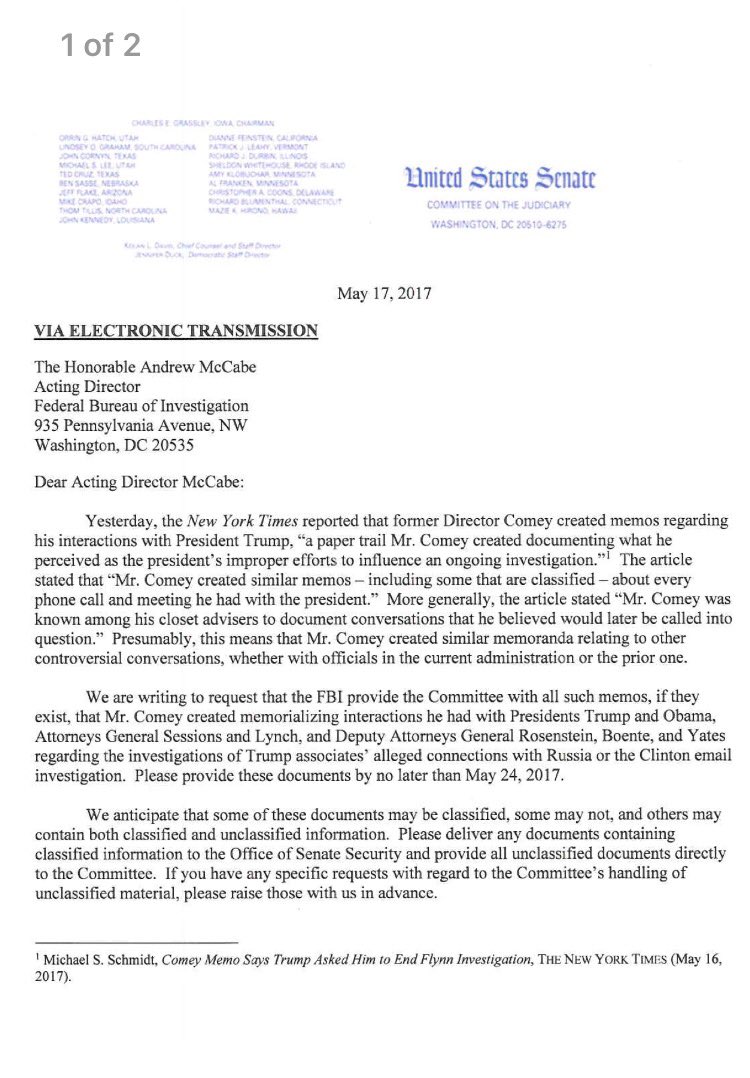