WikiLeaks founder Julian Assange has confirmed what we all guessed … that having repeately pledged to fight Hillary Clinton 'all the way', even as far as forcing a vote at the Democraric Party convention, Bernie Sanders cave in and appeal to his supporters to 'get behind Hillary' was a result of his being physically threatened.

During a recent interview with the highly respected Australian investigative journalist John Pilger, Assange said that Sanders was forced to drop out of the race due to threats to himself and his wife from the Clinton campaign.


Assange’s allegations substantiate claims by the Kremlin who revealed they had evidence that Jane Sanders was physically threatened in order to “get Bernie on board” with Hillary’s campaign.


Pilger, who is working on a documentary about Assange, asked:


“Julian, we [The BBC Andrew Marr Show] cut you off earlier this year when you were talking about what you felt were the most significant emails that you have released. Is there any last one that you’d like to mention? And also, do you have any thoughts on Bernie Sanders? I mean what is your opinion why Bernie Sanders drop out of the race?”

“Look, I think you know, we know how politics works in the United States. Whoever, whatever political party gets into government is going to merge with the bureaucracy pretty damn fast. It will be in a position where it has some levers in its hand. And Bernie Sanders was independent candidate trying to get the nomination through the Democratic Party and if you ask me he did get the nomination, but he was threatened to drop out.”

(It has been widely rumoured that the Democrat National Committee was complicit in widespread voter registration fraud in the primaries campaign; had not thousands of Sanders suppoters' name been removed from the registers, and had all votes been counted, the Maverick socialist would have won the nomination easily, as we reported HERE and HERE.

Again, Assange has promised to release incriminating emails which are sure to result in Clinton’s indictment. He says he has evidence that Hillary made deals with an alleged Islamic state sponsor, as well as damning information about the Clinton Foundation.


The Clinton campaign knows he’s on to her, too, which is why a strategist called for an assassination of Assange on TV.


“Of course, we’re very interested in revealing the truth about any candidate and yes we have some material about Bernie Sanders that will be published,” Assange added.

This is the real face of Hillary Clinton folks! She wants to bully and threaten her way into the Presidency. However, WE THE PEOPLE, won’t sit and watch this happen. 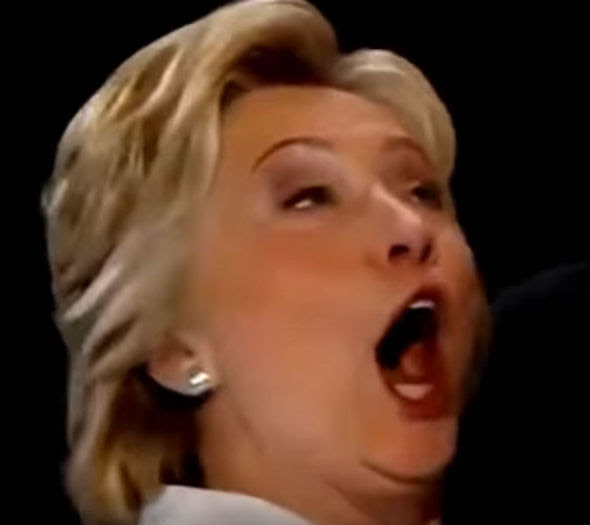 Hillary Clinton during on of her increasingly frequent 'eppy' episodes (Image source: Express )

Accordiong to a shick claim posted on the web by an anonymous person who claims to be a senior doctor working in a medical school, HILLARY CLINTON is probably suffering from advanced vascular dementia.

The 68-year-old Democratic Party presidential candidate, who has repeatedly denied she is battling serious health issues, has “never recovered” from a serious blood clot in 2012  which “triggered” the degenerative disease and is already in the latter stages of the illness as recent “complex partial seizures” show and “extremely unlikely” to live beyond 18 months.


The latest controversial claims about Hillary's health purportedly come from a professor at a US medical school, who has posted them anonymously online.

In a detailed 10 minute YouTube video, using brain scans, disputed medical records and slow motion clips of Mrs Clinton, the “professor” – who claims to have taught at three medical institutions – sets out the case.

“Hillary Clinton is running a campaign for president knowing that she will die.” the doctor alleges, “Patients who are diagnosed with vascular dementia are given a three to five year life expectancy.

“We can see Hillary demonstrating problems with motor movement, with verbal communication, with forgetfulness and weakness. Subcortical vascular dementia is an especially difficult form of the disease because it is affects the brain stem, which controls many of themost primitive and essential body functions.


The Professor continues: “I have treated many patients with brain anomalies throughout my career. “I can tell you that Hillary is showing decline consistent with a progressive disease like vascular dementia.

“Very few doctors are speaking out about this because they don’t want to get involved.
“Hillary Clinton is sick and likely dying. I am not making this up or overstating this. This is typical of the progression of vascular dementia.”

The video, which has had 30,000 views in just 24 hours, continues: “To say that nothing is wrong with Hillary is dishonest.

“Her cognition and mentation are noticeably affected.

“Very soon she will be cognitively unable to fulfil the office and requirements of the presidency.”

Though there may be valid reasons for the doctor having posted this anonymously, the fact that the originator of the content is not named must damage its cedibility. On the other hand, even in the days leading up to Hillary's latest 'medical episode', which culminated in a revelation that the candidate has pneumonia, several prlonged coughing fits were dismissed by campaign staffers as being due to 'allergies'.

This behaviour by Clinton and those around her reveals that whenever threatened their first instinct (triggered by the brain stem?) is to lie and try to bluff their way through the problem.


Vascular dementia is caused by reduced blood supply to the brain due to diseased or damaged blood vessels – and according to the analysis, this is exactly what happened to Mrs Clinton when she suffered serious concussion four years ago.

The former US Secretary of State contracted a stomach virus in December 2012. That caused sickness and dehydration, leading her to faint, fall and bang her head causing concussion.

A week later, she was diagnosed with a serious blood clot in her head, which caused a blockage in a vein that drains blood from the brain.

The clot – the second that Mrs Clinton has suffered – resulted in a stay in hospital and several days of treatment, forcing her to wear special glasses for several months afterwards.


According to the NHS vascular dementia is a common form of the disease that  affects more than 135,000 people in the UK.

It is a degenerative cognitive impairment associated with gradual death of brain cells. It's rare in anyone younger than 65.

Many cases of vascular dementia start with early warning signs, including slowness of thought, difficulty with planning, language problems, attention and concentration difficulties and mood or behavioural changes.

Mrs Clinton has been filmed on a number of occasions visibly shaking and appearing to lose her train of thought. In recent weeks she has also been affected by coughing fits.
The Democrat nominee has repeatedly denied claims that she has a degenerative disease and her advisers have rubbished the “medical records” used in the analysis.
RELATED POSTS: