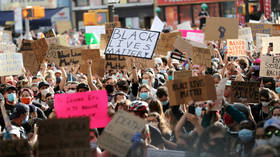 Anti - racism protestors enjoy their immunity?
It must be well known to our readers that the collective opinion of contributors to this blog on "scientists" and "experts" is that they are all wankers. This does not include practicioners of the sciences who have the self awareness to describe themselves as chemists, biologists, physicists, medical doctors or some other recognised discipline, in which case we acknowledge their expertise in a specific feild of human endeavour. It's the ubiquitous but non specific "scientists" or "experts" that pisses us of as if these vague generalisations confer infallibility on people who are often notyhing more than self aggrandizing oportunists who talk bollocks knowing it will be reported by mainstream media as if it is a divine revelation.

In perhaps the silliest example yet of the fallibility of these clowns, an open letter signed by hundreds of self-styled health ‘experts’ proposes the totally insane theory that “protests against systemic racism” are not only Covid-19 safe but “vital to the national public health” (apart from the health of people on either side who get injured or killed of course,) - while participation in protests against lockdowns carries a high risk, with infection and a slow, painful death almost guaranteed.

Calling “white supremacy” a “lethal public health issue that predates and contributes to Covid-19,” the letter - signed by upwards of 1,200 self-declared public health experts before it was closed to signatures on Tuesday, supposedly because “alt-right messages” had been added - trumpets the necessity of continuing the protests that began after a police officer killed George Floyd by kneeling with a knee planted on his neck while Mr. Floyd was taking part in an orderly and legal demonstration against the lockdowns in Minneapolis, Minnesota, which are bankrupting many small businesses in the USA and driving many poor families to destitution.

The way ‘Covid deaths’ are being counted is a national scandalThe Coronavirus Response Is The Biggest Assault On Freedom Since World War 2
Coronavirus deaths: Are The Authorities Deceiving Us?