The Obama's were always and very obviously control freaks whose main agendas were black supremacism and the creation of an academic elite to fill the positions that in a planned bureaucratic dictatorship that would replace the elected government. That much is supported by evidence; whether or not Michelle is a pre - op transexual or just an ugly, fat - arsed angry black woman and Barack is a somewhat lapsed Muslim who was once self employed as a professional cocksucker and arse - merchant is a matter of opinion.

One of the pieces of evidence that supports the case for rampant control freakery was Michelle's much publicised initiative on making school lunches more healthy and nutritious. To achieve this she had education officers kick favourites like burger and fries or hot dogs off the menu and put politically correct vegan food fascists in charge of what kids ate for lunch. 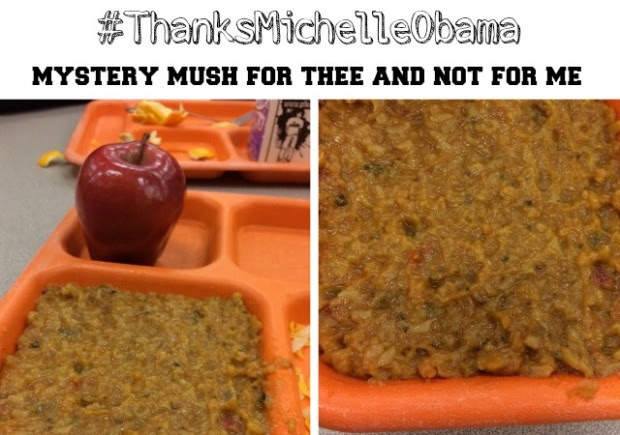 image source: legalinsurrection.com
The result was disastrous, doubly so for pupils from poor or low aspiration homes who relied on that school lunch as their only good meal of the day. Much of what the vegan fascists put on the menus was inedible (have you ever seen a vegan who looks well fed) and more food was ending up in waste bins that in kids' stomachs.

Reversing what ought to have been known as Obamashite, the healthy pigswill program must rank as one of the biggest achievements of Donald Trump's first 100 days in office.

While Barack Obama was in office there were some big changes to school lunches which were ostensibly intended to make them more nutritious, but actually wound up making them mostly inedible. (A project championed by Michelle Obama as her signature issue.) On Monday, those rules may be changing, much to the relief of students around the nation. (The Hill)


Newly minted Agriculture Secretary Sonny Perdue is expected to unveil a new rule Monday aimed at giving schools more flexibility in meeting federal nutrition standards for school lunches.
The U.S. Department of Agriculture (USDA) announced Friday that Perdue and Sen. Pat Roberts (R-Kan.) will make the announcement at the Catoctin Elementary School in Leesburg, Va., where they are expected to eat lunch with the students.
Republicans have long been trying to dial back the standards that became a pillar of former first lady Michelle Obama ’s initiative to curb childhood obesity in the U.S.

I’m sure they’ll find better ways to describe it for PR reasons, but what we’re mostly expecting is a revamp of the program to “Make Lunches Edible Again.” Taking virtually all the salt out of the menu items and pushing raw veggies while scaling back on meat or anything with any fat in it was a disaster in the making from the beginning. This was something I first started writing about nearly three years ago in terms of Michelle Obama’s War on Edible Food.

Read all this report at Hot Air


Obama Trumped As He Tries To Persuade Germans He's Still President
As the political system in Britain seems to be falling apart ahead of the election, the mess in America seems to get worse and worse because delusional Democrats just can't accept that they lost the election last November