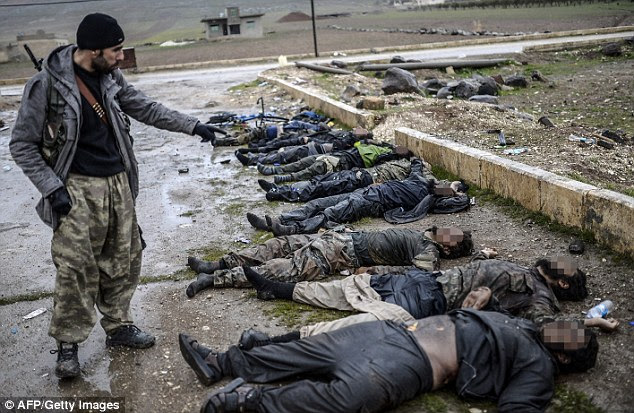 Syrian commando counts ISIS dead (Image source)
We told you back in December that Turkey and Saudi Arabia are the real rogue states in the middle east. And we also described how these two nations, in collaboration with their ally the USA are the biggest sponsors of Islamic terrorism. Not many people in the west understand that Islam is a more violently divided religion that Christianity ever was. While there have only been local wars between Catholic and Protestant and the 30 years war between Catholicism and Orthodox Christianity, Sunni and Shia Muslims have been going at each other for fifteen hundred years.

Even mainstream media has been forced to concede that Turkey and Saudi Arabia are apparently ready to send ground forces to the Syrian battlefield as Assad's forces, backed by Russian air power and Iranian elite troops but continue to grind down ISIS forces equipped with US made arms and ammunition via Saudi Arabia and funded by Turkey's illegal oil trade with the terrorist group. But while the press and television news only reports that the Turks and Saudis are 'considering direct interventio on the ground we have learned that while a direct invasion has not yet been launched, an indirect one is already happening.

Political scientist Yuri Pochta told Radio Sputnik: "The fact of the matter is that the invasion is already taking place, but it is indirect. Turkey and Saudi Arabia are acting through rebel groups that are fighting against Damascus,” Pochta explained. “These militants have been less active since Russia launched its aerial campaign. They are losing in several regions."

The Syrian Arab Army, assisted by Russian warplanes and Hezbollah fighters, has managed to turn the tide of war in recent months and is currently on the offensive. This year, Damascus-led forces have scored major victories in Latakia and other provinces, while militants from Daesh and other terrorist groups are retreating.ISIS have also suffered something of a mauling from the free Kurds in norther Iraq and north east Syria.

Ankara and Riyadh have “apparently decided to save Obama's arse after his latest and biggest foreign policy disaster by launching a direct ground invastion of Syria to overthrow President Bashar al-Assad which has been a US neocon ambition since george W Bush was in power. The close business links between the Bush oil dynasty and the Saudi royal Hose are well documented. Evidence supporting this information has surfaced this week. On Thursday, Russia’s Ministry of Defence announced that Ankara was "actively, but covertly" preparing to launch a military campaign in Syria. On the same day, Saudi Arabia confirmed its readiness to take part in a ground operation, if the US-led coalition would support one.

Pochta warned that Turkey and Saudi Arabia would further complicate the situation in Syria if they decide to send ground forces to an already overcrowded battlefield. Many experts have long pointed out that resolving Syrian crisis is a major challenge due to the sheer number of stakeholders involved.

War Is Good, The Obama Worshipping Guardian Says
Alas that all went down the pan in 2008 when the USA elected its first (and probably last) black president. Like American liberals, the hacks at The Guardian could not see past the colour of Obama’s skin and before Obama had even been sworn into office they were declaring him not just the greatest president ever but the greatest human being ever

US Allies Now Fighting CIA-Backed Terror Groups In Syria
The idea that ISIS has very close links with the USA has gone beyond conspiracy theory, or anti US propaganda, the proof is out there. We have previously reported on the US government's links to ISIS and revealed the vital role of NATO member Turkey in supporting the terrorists in their campaign which aims to create an Islamic Caliphate stretching from the Mediterranean Sea to the Persian Gulf
Is USA preparing for all out war with Russia?
Obama Launching Massive Military Intervention In Libya And Iraq
US weapons reaching ISIS through Turkey
ISIS as US creation
The real agenda behind the war in Syria
Turkey / ISIS Oil Trade? Everyone Kows What's Going On Say Istanbul Residents
Turkey's Links to Islamic State
Obama says he brought peace to Syria as fighting intensifies
Putin response To Obama's Claim He Brough Peace To Syria
Syria the biggest US foreign policy blunder ever
NATO Hypocrisy: Edrogan Threatens Russia, NATO Tolerates Turkey Helping ISIS
The Source Of Islamic Radicalism Is biggest US Ally In The Middle East
US and UK hypocrisy on Syria
Did Saudi Arabia Just Announce Its Intention To Invade Syria And Iraq?
USA proxy war on Russia in Syria
Who of those we think are on our side is really helping ISIS
More On The Turkish Involvement With ISIS Illegal Oil Trades
ISIS, Democracy, Dickheads