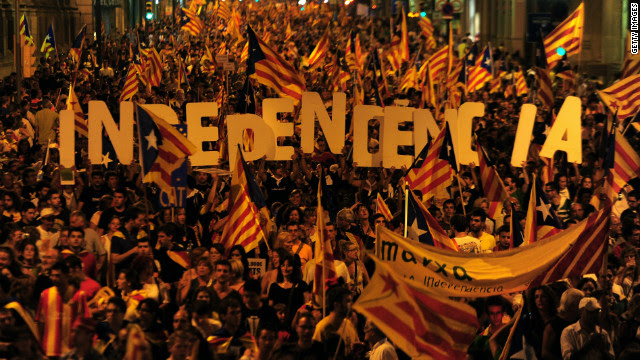 A week on from the historic Catalan Independence Referendum result opened a new front in the war between the European Union's bureaucratic dictatorship and the general population who are coalescing behind various nationalist and secessionist movements, tens of thousands of people took to the streets of Catalonia’s capital Barcelona on Sunday in what looked like a staged protest by the people of Spain against any unilateral declaration of independence by the already semi-autonomous Catalan region. According to Reuters the protests showed "how divided the region is on the issue."

We should bear in mind of course that Reuters is a press agency and often reports only information contained in official government press releases. There are fears in Brussels and throughout European capitals among politicians who favour political integration of the twenty seven EU member states that should the Catalonia secession movement succeed it will lead to a spate of similar actions in other nations where prosperous regions are being hit by EU immigration policies and the suffocating layers of bureaucracy that are suppressing business growth and hitting living standards.

In fact the region is surprisingly united in its support for the creation of a breakaway state. Government and EU propagandists are in no hurry to admit that however.

Last Sunday, more than 90% of the 2.3 million people who voted backed secession, according to Catalan officials. But that turnout represented only 43 percent of the region’s 5.3 million eligible voters as many opponents of independence stayed away. Many others were prevented from voting by the brutal tactics deployed by police in riot gear as they tried to carry out the wishes of central government by disrupting the vote.

In an interview with El Pais newspaper, Spanish Prime Minister Mariano Rajoy said he will consider taking the so-called "nuclear option" - i.e. suspending Catalonia's autonomous status (article 155 of the Spanish constitution,) - as Catalan leaders escalate threats to declare independence from the country, which could culminate with a parliamentary announcement as soon as Monday.

Asked if he was ready to trigger article 155, Rajoy told El Pais newspaper: “ I am not ruling out anything that the law says. What I have to do is do things at the right time, which is the most important thing right now. The ideal situation would be to not have to take drastic solutions, but for that to happen there would have to be rectifications."

Until this weekend, Rajoy has remained vague on whether he would use article 155 of the constitution which enables him to sack the regional government and call a local election.

Reverting back to a hardline stance, the conservative prime minister ruled out using mediators to resolve the crisis - something Puigdemont has said he is open to - and said the issue would not force a snap national election. The Prime Minister also added the government would “prevent any declaration of independence from materializing in anything”. “Spain will continue being Spain,” he said.

Rajoy reiterated that until the regional government abandons its intention to proclaim independence, no talks can take place.

EU Unravels: Spain follows Poland’s threat to quit EU ‘No more humiliation!’
Spain has become the second country this week to claim it could ditch the EU, following a similar threat from Poland amid growing fury at the power that Brussels now holds over the governments of member-states. Right wing party Vox, is under huge pressure from rank and file supporters to back the Spanish version of the Brexit referendum, after an an ECJ (European Court of Justice) ruling last week.

Independence Movements That Could Destroy The EU

Catalonia To Declare Independence From Spain On Monday

Spain Set To Split As Catalonia Says ‘We Quit’

Spain Joins Greece In The Euro Dance Of Debt